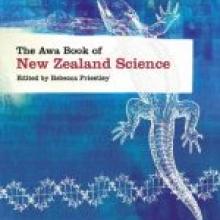 Scientific discovery is made simple in this exceptionally readable collection.

Once upon a time, science teaching included studying and retracing the thought processes of great scientists.

By what mysterious mechanisms did they gain amazing insight into the previously intractable? The answer, so often, was a process of increasing simplicity, not complexity.

Sadly, learning through fascination has largely been replaced by a pursuit of arbitrary, examinable facts.

The rich history of science is increasingly ignored.

Rebecca Priestley's superb book fills 350 pages with the words of 50 scientists as they relate their discoveries first-hand, or occasionally the discoveries of others.

A few well-written paragraphs by the editor introduce each short excerpt, which often is taken from a contemporary publication or speech, sometimes from later reminiscences.

The breadth of coverage is comprehensive and the historical perspective is deep.

Ferdinand von Hochstetter's account of the departed pink and white terraces, studied in about 1859, is presented in Charles Fleming's 1959 translation and accompanied by Daniel Mundy's photographs of 1875.

Camping on an island in Lake Rotomahana and finding his bed uncomfortably hot, von Hochstetter stuck a thermometer in the soil.

"It rose in a flash to boiling temperature. When, however, I withdrew it, hot vapour steamed hissing out, so that I stopped up the hole again in a hurry."

Within 27 years, sad to say, the fabulous terraces were history.

The discovery of the takahe is told first in an 1850 note from Walter Mantell to his father, a London palaeontologist, enclosing a skin and relating how some sealers had caught and eaten the bird.

Geoffrey Orbell's legendary rediscovery of the living takahe in 1948 is told in a 1949 account by Joan Telfer, who accompanied the expeditions.

The clever sifting of anecdotes and clues by Orbell as he pieced together the likely habitat of the bird is a story in itself.

The similarly threatened kakapo, recent population 86, is described in a 1903 account by Richard Henry, then caretaker of Resolution Island, Fiordland.

Ernest Rutherford's discoveries in radioactivity are told in his own words from a 1936 lecture.

His observations seemed disarmingly simple, based on how radioactive emissions reacted with paper and air, but the supremely logical explanations at every step were the mark of true genius.

In 1941, 20 years before others proposed the concept, Harold Wellman stumbled on the principles of plate tectonics, the idea that the Earth's surface comprised slowly shifting plates.

Armed with the observations of his exploration of the West Coast and the Southern Alps, he took a pair of scissors, cut the map along the Alpine Fault, and slid Westland up 480km to where its geology matched that of the Nelson area.

The story is told in his own words and those of his biographer Simon Nathan.

These five are perhaps higher-profile examples from the numerous encapsulations in this exceptionally readable book.

Each chapter is short, self-contained and carefully selected - a good couple of months of excellent bedtime reading.

Clive Trotman is a Dunedin science writer and technical arbitrator.