Flames is a highly innovative debut work from Australian writer Robbie Arnott, which somehow manages to wrap up all its threads despite its complex interplay of realism and fable. 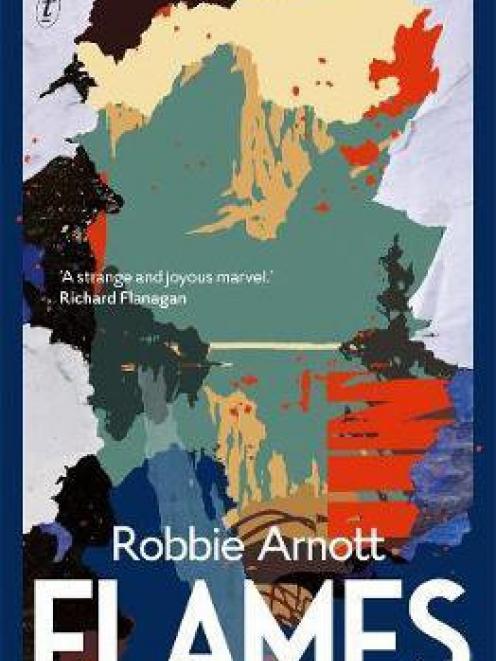 It opens with a female member of the McAllister clan, living in small-town rural Australia, reappearing posthumously as a ghoulish, moss-covered figure, body sprouting thin tendrils of filmy fern; she is alert and active, yet liable at any moment to combust. It seems this is a trait of many of the McAllister women, and while largely accepted in the close-knit community, it provokes in the daughter of this moss-covered centrepiece a large-scale breakdown. Not aiding this is her brother’s reaction, for Levi decides that the only way for Charlotte to recover and avoid a similar fate is if he builds for her benefit a precisely measured coffin for when her time comes. By avoiding the likely drama of spontaneous combustion, hopefully she can rest in peace. Not surprisingly, Charlotte is little pacified and streaks out of the scene, but the worlds into which she stumbles are far from safe havens.

The terrain of unpopulated Australia is a world where nature has taken over; where water rats take on the mantle of River God, and where fur pups work in harmony with their fishers to reel in the hefty Oneblood tuna from within the shiny trenches of the kelp forests. Malevolent coffin-makers lurk in the back-blocks, easily riled by simple interaction to instant vehemence, clutching soft wombat pelts as a measure of luck and fortune in the next life. Across rivers and into timeless tin-mine towns through orange pulses of hangovers are equally dim-lit, ambiguous scenes where creatures are slaughtered, gin-drinking detectives creep, and dreams or reality are reminiscent of Dali and Chagall with flying and floating. Nowhere is safe, and everyone and everything seems to be on the run, but the dangers are hard to trace. Creatures of the wild have learnt to recognise in humans, or "pale apes", the "colour and shape of their callousness".

Arnott wraps together wonderful elements of invention in a particularly dark, ominous fairy tale, where the rising sun falls over its creatures in a "yellow crawl".  He frequently relieves the violence and imminent despair through absurd humour. The characters have lovable,  empathetic qualities while  teetering on the verge of stark madness. Even in an outraged, abusive maker of coffins can we view the humane.

Arnott’s narrative is complicated yet tightly strategised, as characters and places slowly join up in a quietly revealed manner. The landscape is  impeccably Australian with its wide, arid lands, yet  otherworldly. The small-town life is that of anywhere,  with gossip-mongers, wastrels, outsiders, and those who have followed in their fathers’ footsteps for generations. There is the odd hermit, or mad crackpot, left to themselves or isolated due to fear. All these characters, as well as the overflowing, ebullient life of a natural world and the supernatural gone mad, tumble together in this finely built and realised first novel.