Focus on scientists' freedom of speech

In this short monograph Shaun Hendy tackles thorny questions of truth, fact and communication in science. 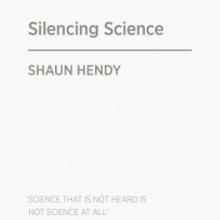 Many hold an image of scientists beavering away in laboratories making discoveries for the enrichment of human knowledge. Of critical importance is that scientific results should be announced publicly so they can be questioned, verified and put to good use.

Of course it doesn't work like that. Science costs a lot of money, and sponsors providing the necessary funds may not want to be startled with unanticipated findings. Commercial confidentiality and patent protection may stand in the way of the free disclosure of scientific work. The trap awaiting an academic institution that accepts commercial funding may be a conflict with its duty to act as the critic and conscience of society.

New Zealand having a small population, sometimes the only ones who can comment authoritatively on a scientific investigation are those involved in making inquiries and thereby compromised, leaving comment to less specialised sources.

The author examines a variety of instances, such as the botulism scare and the Christchurch earthquakes. Everyone wants to hear the most accurate predictions of what could happen next. Or do they? A government may consider the public interest is not best served by issuing alarming predictions as it looks to provide comfort and reassurance. Before the deadly 2009 L'Aquila earthquake in Italy, a government official said it was unlikely to happen, despite minor quakes. Afterwards, six earthquake scientists were convicted of manslaughter (reversed on appeal) for allegedly failing to provide adequate warning.

A scientist warned of the possibility of a tsunami hitting the Fukushima nuclear power plant before just such a disaster happened. After every disaster it is common to find people who had said it might happen, but in a science as inexact as earthquake prediction, being right in hindsight does not equate with clairvoyance.

Nothing generates more steam than being told what is good for us. Every spectrum of expert will wade into a debate such as whether to add folic acid to bread (or fluoride to water) with absolute conviction that it is a deadly poison, or of immense medical benefit, or indiscriminate compulsory mass medication, or some devious commercial ploy, or a big nanny micromanaging every aspect of our lives.

If it proves one thing, at least some experts must be wrong. But any notion of trying to suppress supposed misinformation leads headlong towards the much more frightening concept of someone seizing the role of supreme arbiter of truth. Not so many generations ago, you were commanded to believe the sun orbited the earth, and could lose your head for stating (correctly, almost) the scientifically verified opposite. Freedom of thought has advanced considerably since then. Hasn't it? After reading Shaun Hendy, one begins to wonder.

Clive Trotman is a Dunedin scientist and arbitrator.