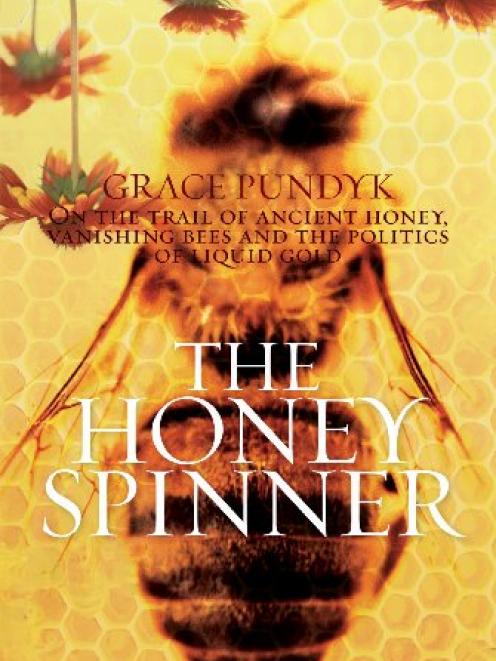 Honey is more than just a breakfast spread. It may just hold the key to the future of our food supply.

THE HONEY SPINNER: On the trail of ancient honey, vanishing bees and the politics of liquid gold
Grace Pundyk
Pier 9, pbk, $40

There is a trend for authors to trace certain products around the world, writing a sort of travel book, memoir, history and exploration of a topic all rolled into one.

Australian journalist Grace Pundyk picks honey and honeybees as her topic, and follows them along the sticky road from Yemen to Australia, from Borneo to China and through the big honey-packing businesses in the United Kingdom and United States.

It is not all sweetness and light, despite the heavenly wild honeys she discovers along the way.

According to the CIA, the honey business is crucial to al Qaeda's operation.

Chinese honey, widely exported, has been found to contain chloramphenicol, a bee drug harmful to humans.

There is also adulteration with corn syrup and chemical residues of many types, fraud, and mislabelling, but, most disturbingly, across Europe, Turkey, the US and Australia bees are disappearing and nobody seems to know why.

Some put this colony collapse disorder (CCD) down to viruses or pesticides, or genetically-modified crops which contain pesticides.

Not only is the disappearance of bees fatal for the honey industry, but also for the crops that bees pollinate, and so for our food supply.

Until people started asking about CCD nobody paid much attention to bees and honey, arguing that if honey could be imported more cheaply, why should they bother with a home-grown product.

But honey is individual to the country and its vegetation - we treasure New Zealand manuka, kamahi, and beech forest honeydew honeys; across the ditch Tasmanian leatherwood and the various gum-tree honeys are enjoyed, while in the Middle East people will pay $150 for a jar of sidr honey from Yemen.

Pundyk travels with nomadic beekeepers in Yemen and in Australia who take their hives around the country to wherever the crops are flowering.

She visits New Zealand to explore the unusual antiseptic properties of manuka honey and chart the spread of the varroa mite from the north to Wellington on a truckload of logs in which a swarm of bees was nesting.

Like many other natural products, honey production is affected by weather, increasing drought, the destruction of habitats, logging of forests and decimation of native species.

She discovers that, as with so many other things, China is the world's biggest producer (of honey), and is now forced to clean up its act after harmful chemical residues were found in its product.

The world today is dependent on China for food, she says.

In Britain, the US and Australia she talks to big honey importers and blenders who do not declare the provenance of the honey on their products - honey is a globally-traded product, but in many countries declaring its origin on a label it is not required.

As a result, canny beekeepers, like small producers of other artisan products, are now producing local, individual floral honeys that command a premium price.