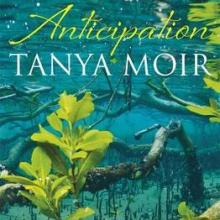 ANTICIPATION<br><b>Tanya Moir</b><br><i>Vintage</i>
Phrases such as multilayered when describing plots of novels usually leave me cold, but Tanya Moir's second-up is certainly that, and almost hypnotically so, as it follows the fortunes of Maggie Biggs, an Invercargill widow's search for her United Kingdom roots, as told by her daughter, Janine.

Using themes that border on Kafka and the best of Kiwi as practised by Katherine Mansfield (colonials looking to the old country for existential answers) and Frank Sargeson and Owen Marshall (Kiwis who find the answers at home), Moir has constructed a complex novel based on a simple premise: who are we; where have we came from; why are we here?

Now for Janine, a successful real estate agent living the solitary life on an offshore island she's just bought near Auckland, is getting a jetty built so she can disembark from her rowboat without plonking her feet in the tidal wastes.

She's attracted to Jake, the man in charge of the job, but after one try at marriage with Greg back in Invercargill, she's shy of wifely responsibilities such as picking up discarded male underwear and socks, not to mention finding evidence of infidelity in the pockets.

To take her mind off personal decisions, Janine reflects on her mother's searches, beginning with squeezing information out of her grandmother, Sarah Biggs nee Harding, who arrived in New Zealand on an immigrant ship in 1956.

Maggie's interest lies in these maternal forebears and, step by step, the narrative tells the story of what Maggie finds, and what this knowledge means to her, and naturally, her daughter. But Janine has her own journey to tell: that of her relationship with Maggie and her grandparents, and that is firmly set in New Zealand, especially Southland.

Locals will feel right at home as Invercargill, Otatara, the Mataura River and Dunedin's Moana Pool and main hospital feature in the narrative, alongside the parallel stories of the London-born Hardings all the way back to the early 1800s, with mysteries, murders and scandals unfolding that owe just a little to Peter Ackroyd. Richly textured, and where appropriate, amusingly and/or compelling told, Anticipation is that oh-so-difficult-to-write second novel that should give Moir an international audience.