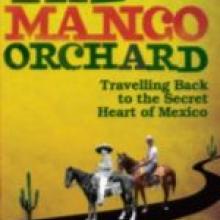 THE MANGO ORCHARD
Travelling back to the secret heart of Mexico
Robin Bayley
Preface, $38, pbk

Travel stories are best when there is a purpose for the travel and Robin Bayley finds that in tracing his great-grandfather, Arthur Greenhalgh, who lived and worked in Mexico in the turbulent first decades of the 20th century.

A few family stories, mementos and photographs carefully kept by his grandmother, Arthur's daughter, were all he had to go by.

Bayley's trip takes him on a roundabout journey, first to New York where Arthur's fiancee Mariah joined him and they married.

He eventually makes his way to Mexico after side trips to Guatemala to learn Spanish, and being waylaid for some months in Colombia and Venezuela.

However, the story picks up when he reaches Mexico and slowly pieces together information about his great-grandfather and finds the location of the cotton mill in which he worked.

Then, to his surprise and the reader's, he finds a large number of Mexican relatives of which he had never known.

When disturbances that led to the Mexican Revolution started in the first decades of the 20th century, Arturo, as he was known there, sent his pregnant wife Mariah and small daughter home to England but he remained in Mexico for another few years.

Meanwhile he formed a relationship with a Spanish woman and they had a daughter.

When the political situation became untenable, he, too left for England.

His Mexican family heard no more of him and wondered what had become of him, and he kept their existence from his English family.

There's a certain poignancy to this part of the story as Bayley learns about his great-grandfather's life from the other side of the family and shares it though faxes and letters with his 91-year-old grandmother, Arturo's daughter.

She's a game woman and makes the trip to Mexico herself, where she is feted by her newly discovered nieces and nephews and their families.

Perhaps the most moving revelation is when he is told of the discovery and destruction of a large collection of letters sent from Arthur to his Mexican mistress, presumably with money for her and their child.

They had been addressed to a friend of his who had not passed them on, and presumably pocketed the money himself.

Arthur, in England, would also have been puzzled by the lack of communication from his Mexican family.

Bayley writes a very readable story, sharply observed and sometimes humorous, even if his wanderings in Colombia and Venezuela seem irrelevant to the main story.