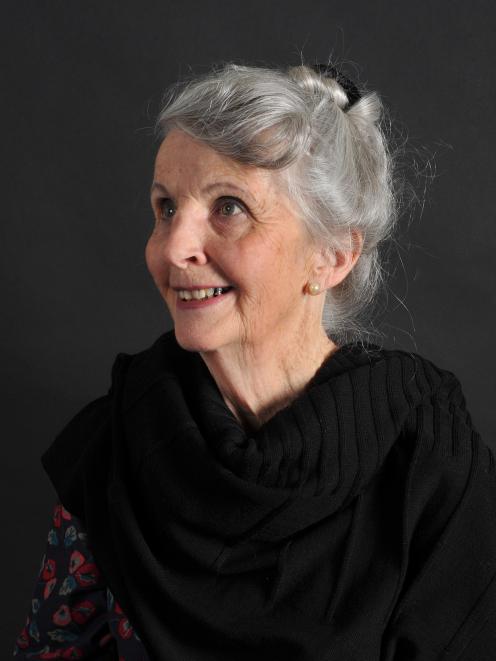 Elizabeth Brooke-Carr is a Dunedin poet, fiction writer, and author of social justice articles. She was raised on the south bank of the Waitaki, where the braided river was her lullaby, mentor and muse. The lives of the river folk still feed her imagination. Photo: ODT

In the second instalment of a special collaboration between the Otago Daily Times, the Dunedin Unesco City of Literature committee and the University Book Shop, Dunedin writer Elizabeth Brooke-Carr takes up the story of the Waitaki River’s first ferryman, Jimmy the Needle.

Part 1: The ferryman names his price

Jimmy the Needle was gathering up bundles of dried raupo from the riverbank, droning snatches of an old sea shanty through weather-chapped lips, when he saw the smoke. He unfurled his lanky frame and leaned backwards pushing his hands into the small of his back to ease the crick in his spine.

Stooping and carrying in the heat took its toll on a man. He was glad to take a break. From his forehead he wiped away pearls of sweat and held his hand there for a bit, making a craggy shelf above the bush line of eyebrows. He squinted across the river. Over on the north bank a slender plume of smoke straggled up to the sky. With hardly a breath of wind to hinder its progress the column wavered up, growing thinner and thinner until it dissolved in a wisp of blue vapour. Jimmy the Needle had a customer.

Forgetting raupo and kinks in his back he leaned down to pull his canoe from the flax and scrub and set it in the water. The sooner he started out the better. Like as not there would be heavy luggage to pack in. Maybe a horse to tow behind. And some animals could be a real cuss when it came to getting them into water.

A few months back one of Molloy’s blokes had set out to bring a couple of piebald ponies back for his boss. The boat was piled high with wool bales and the boatman, McGowan, a cantankerous old sod, who’d ended up behind bars for burning down the ferry house accommodation on the north side of the river, hollered at Molloy’s man to hold his pony tight. But it wouldn’t budge. It wasn’t until the last minute that he got it to take to the water. Molloy’s man lost the skin off his palms that day but he’d kept his pony’s head up and pulled the animal across behind the boat. Eventually he’d reached Oamaru, stayed the night and picked up the two piebalds. 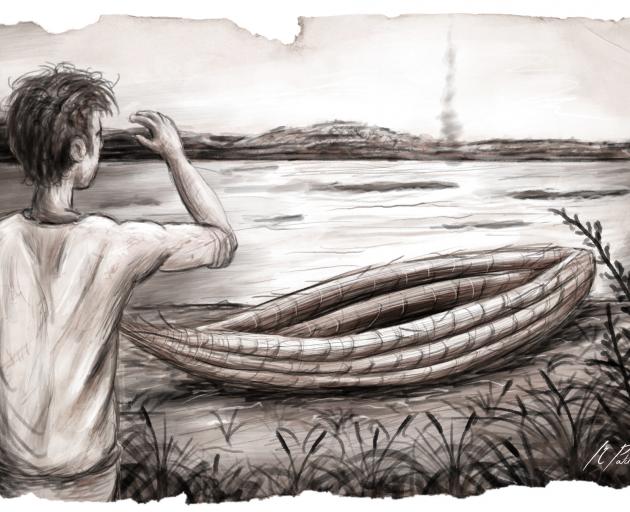 Next day at the ferry, Molloy’s man found another traveller waiting with a horse. When the boat left shore the three ponies and the horse jumped into the water with an almighty splash, and all hell broke loose. One of the ponies leapt on the back of another and disappeared in the struggle of heads and hooves. Somehow it managed to surface again, twenty yards downstream, caught sight of its mates swimming for the north bank and had the sense to follow them across.

Jimmy the Needle hoped there’d be none of those shenanigans. He checked his oars and made ready to push off. Glancing up he saw Te Rina, seven months pregnant now, picking her way over the stony, tussocky ground towards him. She’d have seen the smoke too.

‘‘He iti ra, he iti mapihi pounamu,’’ she called, holding her stomach. ‘‘Haere ra.’’ She wanted him back safely.

She needn’t have worried. He’d been around water most of his life. Started out as a sailor in the old country and when he arrived in New Zealand with the taste of salt still on his lips, whaling had pulled him in. He’d probably still be a whaler if the station at Hine-te-kura hadn’t gone bust. For a while afterwards he’d felt a bit aimless. Then he thought of going south to Waikouaiti where he’d heard that Johnny Jones’ station was doing all right. Of course, he hadn’t counted on changing tack at the Waitaki.

Not that the river crossing was a problem. He’d helped himself to an abandoned mokihi that he found and paddled across, no trouble. No, it wasn’t the river, it was Te Rina’s charm that changed his plans. She’d persuaded him to stay with her at Puna-a-maru on the south bank. Besides, there was a chance there to make a bit of profit if he played things right.

Almost before he got his bearings though, he’d found out he was going to be a family man. That hadn’t figured in his scheme of things either. But there you go. There was no accounting for the way the world tilted at times. On the whole he was pretty pleased with how it had worked out. One day he’d teach his boy to handle a mokihi, to read the river and her moods, and he’d pass on a little savvy about dealing with customers. With McGowan out of the way, they’d build a good business together.

He dropped the oars and strode across the shingle to Te Rina, trousers flapping half-mast against the lean poles of his legs. He planted a kiss full on her lips. ‘‘I’ll be right back, princess. Safe and sound before dark. You take care of that little piece of greenstone for me.’’ He slid his palm down the curve of her belly. ‘‘I know this river like the back of my hand. An’ if I can’t handle a canoe, I’ll eat my hat.’’ He grinned at her, wide-mouthed, raffish, full of pride. ‘‘Crikey, it’s a scorcher.’’

Drawing close to the north bank Jimmy the Needle saw two men waiting. But no horse. His relief was tinged with disappointment. He wouldn’t make as much as he might have done, but at least there would be no fuss. The taller of the two approached and inquired about the fare for crossing.

‘‘Ten shillings,’’ said Jimmy the Needle, naming his price firmly. With no set charges he was bound to make the most of every opportunity, especially now with family on the way. And this fellow with the fancy luggage and a servant in tow looked as if he could afford it.

‘‘That seems rather a large sum,’’ said the gentleman. He turned to his companion for confirmation, as if together they might change the ferryman’s mind.

The gentleman’s grip on his valise grew firmer. He nodded to his companion who began gathering up the rest of their luggage. Jimmy the Needle settled them in amongst their possessions and hauled on the oars. They rocked a little then shot briskly out into the current.

‘‘Well, now,’’ said the gentleman, clambering out after the pitch and swerve of a speedy crossing, ‘‘pleased as I am to be on dry land again, that does seem rather a lot to pay.’’

For the briefest moment Jimmy the Needle toyed with the idea of making a slight reduction on account of the fine weather. But he tossed the thought aside like a flat river stone and let it skim away before it had time to reshape his purpose. He shuffled his feet a little, stared across the top of the stranger’s head, ‘‘That’s m’ price.’’

The gentleman, sensing an impasse, raised a pair of smooth hands in front of his stomach and brought the tips of his fingers together, before he swung them towards his feet, ‘‘Your price, sir, was considerably more than I expected. Do you know whom it is that you have ferried across?’’ He spread his palms outwards.

Jimmy’s eyes flickered to the servant who had moved closer to the gentleman’s elbow, and back to the gentleman. There wasn’t a feature he recognised on either of them. ‘‘Ain’t never set eyes on you before.’’

‘‘Well, sir, I must enlighten you.’’ A smile played around the corner of the gentleman’s mouth. ‘‘I am Bishop Harper of Christchurch,’’ he said, extending his hand. Jimmy the Needle hesitated for a fraction of a second. Then he grasped it in his own as fleetingly as if it were a slippery eel, before he let it slide away. The Bishop nodded towards his companion, ‘‘And this is my valet, Samuel.’’

‘‘How d’y do,’’ said Jimmy the Needle, oily as blubber. It was all a bit queer really. Them coming over all formal like that. Hadn’t they just been talking nice and easy about the weather and the countryside as he rowed them through the water? Then, swift as the current itself, Jimmy’s tongue cut across their pleasantries. ‘‘In that case I must charge you more,’’ he said. ‘‘It’s not every day I have the honour of crossing a Bishop.’’

Lying in their whare that night with his face in the ripple of Te Rina’s hair, his hands rowing soft strokes across her skin, Jimmy the Needle chuckled. ‘‘You should’a seen his face when ’e thought ’e was gonna have to pay more.’’

The ethics of sliding fares was of no interest to Te Rina. She murmured into Jimmy’s shoulder, ‘‘No worries. You’re back safe. That’s all that matters, eh?’’

‘‘Mmmm, a course.’’ His voice trickled into her ear. ‘‘You know me, princess. Ain’t no river gonna get me. No bleedin’ Bishop neither. How the hell was I supposed to know who he was? The wily bugger’s got the gift of the gab, I’ll say that for him. He drove a hard bargain but I got a good fare outa him in the end. Not too much mind, but he’ll be back in a month or so. We’ll do better business then.’’ And he smiled into the darkness.