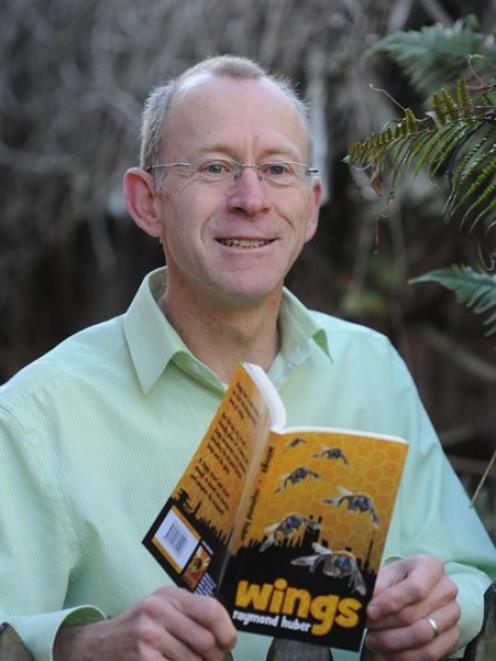 Raymond Huber has tried to write the kind of books he enjoyed as a child. Photo by Peter McIntosh.
Dunedin author Raymond Huber likes nothing more than satisfying his flights of fancy, writes Shane Gilchrist.

Raymond Huber enjoys science-fiction. He also has a penchant for scientific fact. Add to that a long-held passion for writing and a more recent one for honeybees and the result is his second children's book detailing the adventures of creatures winged, willing and (in the case of a giant hornet) wicked.

Wings, published last week, is Huber's follow-up to his 2009 fiction debut, Sting, which has sold more than 4000 copies (in Australia and New Zealand) and was named a finalist in the 2010 New Zealand Post Children's Book Awards.

The Dunedin author aims to walk the line between fantasy and reality. Thus his characters, including key protagonist Ziggy (a bee), behave largely as they would in nature, though they happen to have slightly greater powers than ordinary insects ("they can fly faster and further ..."). Oh, they also speak in English.

Blame it on a birthday present, Huber says.

"I think it might have been my 40th when I was given a beehive. I learned about beekeeping and became fascinated with bees.

"I realised I didn't have to invent anything; it was all there. This was a creature that had such weird and wonderful features: it could talk by dancing; it had magnetic crystals in its body and had a weapon it could use only once. Also, it kept the human race alive by pollinating our food crops.

"Really, the honeybee is a bit of a gift to writers," says Huber (53), who has also recently completed a non-fiction picture book, Flight of the Honey Bee, a collaboration with New Zealand illustrator Brian Lovelock. 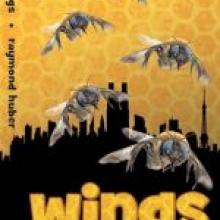 Wings might be a work of fiction, but it includes an appendix explaining bee science and the cultural history of beekeeping. There is an inherent, albeit understated, message: we need to look after our bees.

"I didn't want to make the message too heavy in this," Huber says. "I wanted it to be an exciting story primarily, but it was partly inspired by concerns over pesticides, which are implicated in the decline of bee numbers.

"Pesticides are affecting bees and weakening them, particularly nicotine-based ones with outrageous names like Advantage, Merit and Admire. In the book I tried to think up a name for my fictional pesticide and it was quite hard because the real names are so awful.

"Bees are definitely threatened by these new nicotine-based pesticides. That is partly because they stay in the plant. By the time the plant flowers, the pesticide is still in the pollen and the nectar and the bees pick it up. At the moment these are sold widely in New Zealand even though they've been banned in a lot of European countries."

An avid reader from an early age, Huber has long harboured a desire to write the type of books he loved reading as a child - "a combination of action, a bit of humour and a few life and death situations for the characters".

"My mum volunteered at a community library in Christchurch so I'd go there every day after school and read. I got hooked on Dr Seuss, then Tintin then The Hobbit.

"With the first book, Sting, I was learning the craft, how to develop characters. I do think you need to let a story sit for a while. I remember reading how Charlotte's Web author E.B. White spent years writing and rewriting that. There is something to be said about taking your time."

Editing is essential, as is external feedback, Huber says, pointing to advice he has received from the staff at publisher Walker Books and, significantly given his intended audience, primary school children.

"With Wings, I visited a class at George St Normal School and the teacher read the first half of the book to them. They gave me fantastic feedback via letters they wrote. I took it into account. There was one character's name in particular they wanted changed, which made me take a close look at all the names and explain them more fully. In the end I did make a significant change."

Huber also seeks advice and insight from his wife, Penelope Todd, an acclaimed author of novels for adults, young adults and children.

"If I'm in doubt about something, then I'll run it past her. Penelope is an excellent editor. I'm very fortunate to have her on the spot.

"I edit my books over and over, refusing to let anything sit that seems out of place or doesn't ring true. But I do think you need to get that first draft down without picking it over too much. You have to write fast enough to 'outrun the self-doubt that's always waiting to settle in', to quote Stephen King. That is particularly true for the first draft, after which you can go back and figure out what works and what doesn't."

In Sting, Huber introduced the key character, Ziggy, a honeybee who, rejected by his hive and kidnapped by the (human) military, ends up befriending bumblebees, fighting killer bees and "discovering the truth about himself".

For the follow-up, Wings, Huber paints a world in which a bee crisis prompts a scientist to seek help from Ziggy, who heads to Tokyo and subsequently battles giant hornets, meets a snake and is challenged to a life-and-death puzzle game.

Perhaps it's best if Huber explains: "It is a completely different story, though with some of the same characters as Sting.

"Bees in Japan are disappearing, which is based on the bee crisis that hit Japan pretty hard; Ziggy and his family explore Tokyo to find the missing bees and on the way they meet a giant hornet, who is a baddy, and go underground exploring the subway and meeting various monsters. Another character I introduce, Fang the snake, challenges them to solve a puzzle and that becomes a crucial element.

"One of my favourite books is The Hobbit, with its famous "Riddles in the Dark" scene involving Gollum and Bilbo Baggins. I loved that scene and, though I haven't copied it, I have used the idea of riddles.

Inspiration for the characters and plot came from various sources, Huber explains.

"Firstly, I wanted to learn a bit about bees in Japan and I found out that Japanese honeybees are the only kind that can defend themselves against the giant hornet."

(By enveloping a hornet, honeybees raise the invader's body temperature to a fatal level while also depriving it of oxygen.)

"Also, I love the idea of sci-fi monsters, those 1950s movies where there are giant bugs attacking cities. It is a bit of a homage to those giant insects."

Huber says he generally writes about subjects that he finds fascinating.

"Mostly, I've written about science for children. At the moment I'm trying to get my head around physics so I can write a novel about that."

That work is one of several projects he has on the go; others include a children's book about conscientious objectors in New Zealand and a novel based on a teenager's experiences in the 1970s, though that is proving difficult to write ("I can see that's going to take me a few years ...").

Huber, who since 2000 has also written about 15 science and English workbooks for primary school level, has also reviewed hundreds of children's books through the years for the Otago Daily Times and other publications.

However, he hasn't always had the time to write.

A father of three, at one time Huber was a social worker who ran a drop-in centre. However, he changed tack, retraining as a primary school teacher then working full-time and, more recently, part-time, before devoting attention to his own words rather than those of others.

"I was teaching so I didn't have the time and energy to write a novel. It was only when I decided to leave teaching ... I was about 50 then and was at that point in life where I wanted to try some new directions, so I became a full-time writer and editor.

"I find writing longer stories such as novels requires a lot of energy but it's hugely satisfying in the end."

• THE BOOK
Wings is published by Walker Books. For more information, visit www.raymondhuber.co.nz.