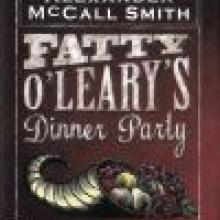 FATTY O'LEARY'S DINNER PARTY<br><b>Alexander McCall Smith</b><br><i>Polygon</i>
It may be a new stand-alone novella, rather than the latest instalment of one his several popular series, but readers will instantly recognise this prolific Scottish author's genial humour and satirical style.

Where else but in the first three pages of an Alexander McCall Smith book would you find characters such as Americans Cornelius Patrick O'Leary (a ''generously proportioned'' antiques dealer known universally as ''Fatty'') his best friends accountant Tubby O'Rourke and dentist Porky Flanagan, and Fatty's wife Betty (formerly of Mobile, Alabama) all living it up in Fayetteville (read Fattyville), Arkansas!

Hearing him read from some of his books and talking lovingly (and laughing uproariously) about his characters was an enlightening experience at the recent Dunedin Writers and Readers Festival and contributed to my understanding of the whole Alexander McCall Smith ''phenomenon''.

His stories may often be labelled ''easy reading'' (certainly the speed at which he writes them make the craft appear ''easy'' for him), but they also contain depth through his wry observations of human foibles and interactions.

In this book, he satirises class (or lack thereof), character, occupation and country, with a plot which balances just on the right side of the implausibility border, and scenes that conjure up images of Fawlty Towers.

His trick is to keep the reader laughing while also imbuing his characters with a certain pathos.

There is much to recognise and empathise with, and the characters' familiarity and fallibility helps to engage readers at more than a superficial level.

Thus, the reader is entertained by Fatty and Betty as they travel to Ireland (Betty's 40th birthday present to Fatty so he can trace his Irish roots) and find themselves in all manner of undignified situations and awkward social and cultural interactions in what rapidly becomes the holiday from hell.

But the reader is also sympathetic to the couple's plight, and compelled to think about the nature of stereotypes and prejudices, the ignominy suffered by those who are overweight, and the awfulness of feeling outside one's comfort zone and far from home.

Fans will find themselves rooting for Fatty all the way, particularly as he faces further humiliation on returning to America at the Meyer Clinic ''fat farm'', the perfect final fodder for McCall Smith's mischievous eye.