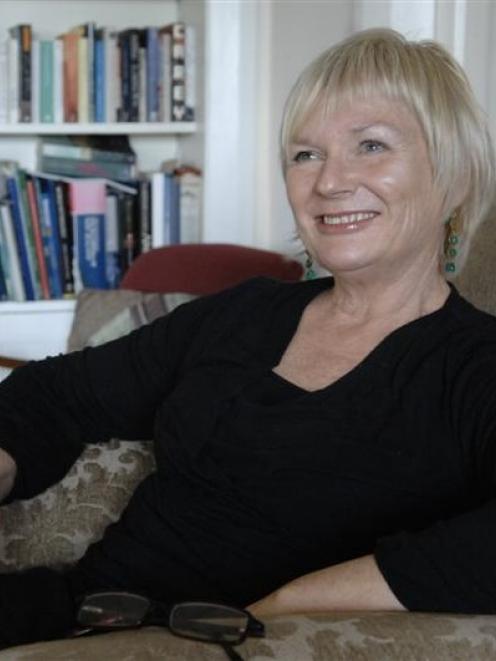 A seaside cottage, sunsets over the estuary, an endless golden-sand beach to walk on and time alone to write - it sounds like every writer's dream.

But for Dunedin author Paddy Richardson a month spent living alone, among a raft of baches on the Kapiti Coast, was a scary experience.

She had no car and only a small white West Highland terrier by the name of Chloe to talk to as she worked on her latest novel about a psychopathic serial sex offender.

"I was writing an intense and frightening book at a beach where I knew no-one. I got that feeling of being threatened and isolated. I think it was a very good thing to happen while I was writing that novel."

As she drew her main character, freelance journalist Claire Wright, into the world of notorious serial sex offender Travis Crill, Richardson (58) found herself locking doors and closing windows at the Foxton Beach cottage.

The idea of a character, Crill, who came from a good background, but was basically evil, was how the story began, Richardson said.

"I also had the idea of my main character, Claire, writing his story and how that would affect her. She takes it on because of money, necessity and it has an incredibly intrusive effect on her life."

A Year to Learn a Woman, which is released on Monday, is very different from her first novel, written while she was a Burns Fellow at the University of Otago in 1997.

While The Company of a Daughter is a "lyrical, slow-moving, meditative kind of novel", her latest effort is much darker.

"When I talked to people about writing this book they were generally fairly negative, because they didn't think I had the experience of that kind of life to write it. They also felt it would be a very difficult thing to live with, delving into the darker side of human nature."

Being locked in a cell at the Dunedin Police Station - "it wasn't anything like I expected, the door clanging was so loud" - was part of her research.

She also discussed crime and prison with a former police officer and read extensively about rape, rape victims and psychopathic behaviour.

"It was very disturbing because I actually discovered there are people who really don't have the same empathy or sensitivity. They don't really care if they hurt people or not.

"I think in the novel both Crill and [another of the story's characters] Savannah are those kind of characters. They create so much havoc."

Work on the novel started years ago, but teaching full-time at the University of Otago restricted her writing to short stories.

Being awarded the $6000 Foxton Fellowship, which included a month's residency in the cottage at Foxton Beach, in March, last year, gave her that time she needed to push her writing.

"It was amazing because I got so much done."

At about the same time she made the decision to give up her job, but giving up "money and security" was not an easy decision, she said.

"I think you just get to the point where you think 'you have to give it a go'."

But even being able to write full-time required discipline and motivation to succeed, she said.

"It is all about determination. There are many days when you don't feel at all like writing, there are all sorts of things you would rather do than write.

"I never enjoy the first draft terribly much. It is just getting the story down. It's very laborious at times trying to work out what could happen."

A second draft "to fix up the writing" was followed by printing out the manuscript and reading it.

Richardson says she spends at least three to four hours writing every day, usually in the morning. In the afternoon she might keep writing, go for a walk to give herself thinking time, or read.

Her next book, about a child who goes missing, will not be written overlooking Foxton Estuary, but from a warm and bright room overlooking Otago Harbour.