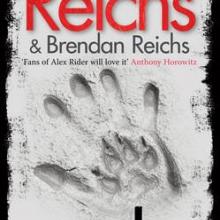 CODE<br><b>Kathy Reichs and Brendan Reichs</b><br><i>Arrow</i>
As a youngster I was a devoted fan of Arthur Ransome's Swallows and Amazons books, so I was pleased to see that the ''young adult'' literature of today is following a similar formula - it has been espoused and modernised by ace crime writer Kathy (''Bones'') Reichs and Brendan Reichs in their latest book Code.

I strayed into this novel thinking it to be another one of Kathy's forensic detective mysteries featuring Tempe Brennan, but found it was aimed at a much younger clientele.

Still it was gratifying to see that Tory Brennan was a major character, a teenager who hero-worshipped her great-aunt Tempe.

And the plot was just as thrilling as any I remembered from my Ransome days - there was a small gang (in the older and less sinister sense) of youngsters who use a boat, but instead of bows and arrows, are involved in using their mysterious ''Viral'' powers (a touch of sci-fi there but convincingly explained) as well as modern technologies, and their favourite game involves the sport of geocaching using GPS co-ordinates in treasure hunts (much more in tune with our digital age).

Their pet dog is really more wolfhound and there are some scary moments spicing up the plot.

The ''Virals'' are put to the test when they find a geocache containing an ornate puzzle box.

The cipher inside is decoded, only to find more tantalising clues have been left by ''The Gamemaster''.

A second, greater geocache must be found, if the youngsters are up to the challenge.

The hunt then takes a dark turn when Tory locates the other box: a fake bomb, along with a sinister threat.

The real game begins: another bomb is out there, a real one, and the clock is ticking ...

This is the third book in a series but can nonetheless be read on its own.

It seemed to be in tune with the lifestyle of youth today, but provided a cliffhanger at the end of each chapter, short ones, compelling reading, even for an oldster.

Geoff Adams is a former editor of the Otago Daily Times.