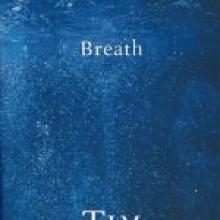 The sea is the true star of Tim Winton's book about two friends addicted to taking risks.

A new book by Tim Winton is always an event.

I read less Australian fiction than I should, but this 40-something chap once again had me spellbound, reading Breath over the breakfast table, on the bus, way too late at night, finishing it on the second day.

Winton's first novel in seven years is set in coastal Sawyer, a stagnating backwater where the ocean offers the only escape from the dull solidity of adult lives.

"I used to get out of bed and lie on the karri floorboards and feel the rumble in my skull. There was a soothing monotony in the sound. It sang in every joist of the house, in my very bones," teenage narrator Bruce Pike (Pikelet), remembers.

So, Pikelet and his tearaway mate Loonie (Ivan Loon) team up with ace surfer Sanderson (Sando) - everyone seems to have a nickname in this book - and throw themselves at the waves.

The book takes its name from their obsession with staying under water (initially river water) for as long as possible.

Gradually they overcome parental objections to test themselves against ever more challenging breaks.

Risk is their drug of choice. Initially, Pikelet and Loonie battle the waves and the sharks for Sando's appreciation.

In Sando's absence, Pikelet takes up with his reserved American champion skier wife, Eva. It is the least convincing part of the book, a return to the Eve-as-serpent mythology of the past.

But if there's a real main character, it's the ocean.

Winton writes with a sense of passion and authenticity that even a non-surfer like me can appreciate, bringing to the page the redemptive beauty of the sport.

"I couldn't take my eyes from those plumes of spray, the churning shards of light," Pikelet says.

"Was this what the old man was afraid of? I tried to think of poor dead Snowy Muir but death was hard to imagine when you had these blokes dancing themselves across the bay with smiles on their faces and sun in their hair."