Time to address the bias in New Zealand history 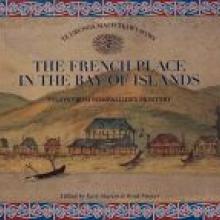 THE FRENCH PLACE IN THE BAY OF ISLANDS: Essays From Pompallier's Printery <br><b>Edited by Kate Martin and Brad Mercer<br></b><i>Matou Matauwhi
In the early 1990s when I joined the Historic Places Trust staff, work was well under way on conserving the trust's Pompallier property in the Bay of Islands.

It was exhilarating to see the building take shape as the $1 million project took shape.

"Conservation" was a bit of an understatement.

Under the direction of the talented project manager Fergus Clunie (strangely not mentioned here), the work stripped back layers of bogus fabric to return the fantasy "bishop's palace" created in the late 1940s to its appearance as the austere rammed-earth mission printery of the 1840s.

Conservation architect Jeremy Salmond describes the conservation project and the attempt to honour all stages of this important property's history.

However, the main focus of the book is rightly on the lives of the missionaries and printers and of France in the South Pacific. It is timely.

Although books on the mission era continue to stream off the presses - three Colensos this year alone - we Kiwis remain anglophiles when it comes to our early history.

Just as we prefer to remember Cook rather than Tasman or d'Urville, so we concentrate on the British Protestants, the Church Missionary Society in particular.

The French Place in the Bay of Islands restores some sense of balance by drawing on presentations given at the return of Bishop Pompallier's remains in 2002 and an historical conference in 2004.

There is also an anthropologist who shares property manager Kate Martin's interest in the information that mummified rats can offer to site-specific historic research through their DNA and what they secreted away behind floorboards and wall linings.

Several writers address the bigger picture of the importation of Christianity to Maori New Zealand.

Manuka explores the oft-addressed issue of Maori literacy, but uses early texts to see how this created a sense of Maori nationhood.

Peter Low examines Pompallier's controversial role in the signing of the Treaty of Waitangi.

Others explore relationships between the denominations.

Garry Clayton's "Francophobia in New Zealand" and Phillip Parkinson's "Errors of Rome" and Protestant "Paper Pellets" remind us of the intense rivalry between British Protestants and French Catholics.

It is easy for a modern reader to forget that in the 1830s memories of the Napoleonic Wars were still fresh and that British Catholics had only recently been given the vote.

Edward Clisby examines the demanding lives led by the mission priests and brothers, the latter suffering from Pompallier's decision to deny them the right to wear their clerical garb in order to raise the profile of the priests. Selwyn was not the only snob.

Ken Scadden provides a brief sketch of the life of Jean Francois Yvert and three authors pen a colourful portrait of one of Pompallier's most inspiring priests, Father Garin.

This could have been a dry A-5 monograph, but Kate Martin, Brad Mercer and their crew have worked hard to make this accessible to a broader audience.

The essays are relatively free of academic jargon and the writing style is consistent; only a few typos mar the reading pleasure.

Above all, it is beautifully presented in a large landscape format and is thoroughly illustrated in historic and modern images, many of them in colour, and some new even to me.

The book does "The French Place" proud.

The book, which costs $69.95, is available at sales@thefrenchplaceinthebay.co.nz

- Gavin McLean is a Wellington historian