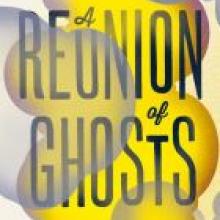 A Reunion of Ghosts is a fabulously imaginative and creative work, which masquerades as a lengthy, collaborative and literary will by three individuals who identify as ''one divorcee, one perpetually-grieving widow, and one spinster'', or, alternately, a ''triumvirate of feminists''.

Lady, Vee and Delph Alter are three sisters in their 40s, and, as they tell us, they are under no illusions that they have achieved grand things in their existences so far.

As fourth-generation Alters they are only too aware of the suicidal curse that runs through their family, and, rather than depress them unduly, such a curse seems to carry for them a romantic, resigned attachment to their similar self-imposed fates.

The sisters keep a chart of their family tree, and of manners of death, which they find comforting in its orderliness.

Thus they have scheduled a collective death day: December 31, 1999, just before the millennium ticks over.

These three women are wry, ironically morbid, humorous and on occasion self-indulgent and bitter, and while they have had different romantic and work experiences they have ended up at a similar place, being a ''partnerless, childless, even petless sorority'', and are none too unhappy about it either.

These women form a reunion of ghosts, or perhaps a talkative gaggle of geese, and this novel is their collective achievement at documenting their family history and their compulsion to choose their time and manner of death.

Self-consciously composing for remaining family or friends, these three women are fascinated by their emergent narrative, as they describe it, often cutting into their story to remind the reader they are still there and considering what to document.

And what they choose is a wide, sweeping history of Jewish Alters who have met their fates in Nazi Germany, or in other rather startling ways been implicated in the playing out of European history.

Mitchell's work, or the Alters' - for we believe so strongly in their tales - is highly unusual, maudlin and ghoulish, constantly obsessed with death.

Historical figures such as Einstein are successfully woven into the historical narrative.

Despite its subject, and sunsets ''beautiful as poison'' which announce the dawning of yet another day, A Reunion of Ghosts really celebrates what it means to live in a worthwhile manner and feel alive.

• Jessie Neilson is a University of Otago library assistant.