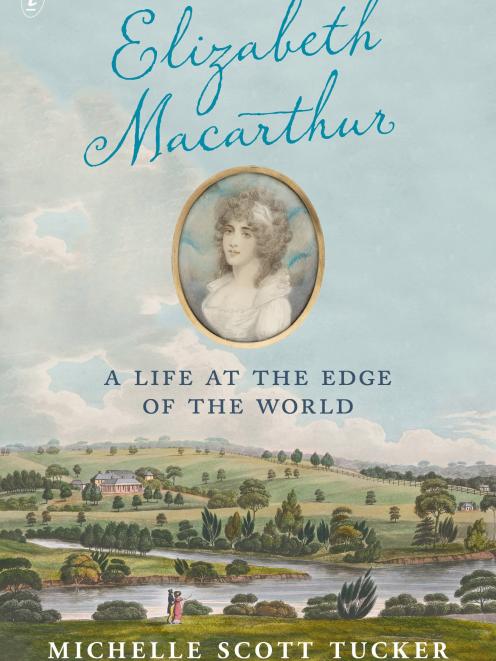 Willie Campbell reviews Michelle Scott Tucker's Eliabeth MacArthur: A Life at the Edge of the World, published by Text Publishing.

So often the history of European colonisation is recorded through the activities of men in travel, battles or leadership positions. In contrast, women can seem vague supportive creatures. Michelle Scott Tucker brings Elizabeth Macarthur from the background and uses both primary and secondary sources to attribute farm management, action, foresight, diplomacy and sound judgement to her, in her role in the British settlement of Sydney and the Parramatta River area.

Elizabeth, whose father was described in public documents as a yeoman farmer, died when she was 6, and she was raised in the family of the Rev Kingdon, in Devon. These families valued ''knowing one's place and keeping to it'', so showing no vulgarity, insincerity or gratuitous displays, while always seeking to increase property and income.

In some ways these are most suitable for someone settling in a rough new colony in Australia. In other ways, they made a social life difficult, as the officer class was small and many men preferred convict mistresses over British wives.

Elizabeth married a young man who had bought himself a military commission, something that elevated his status from that of a draper, and gave him a posting in the New South Wales Corps. In 1790, she and John travelled in the New South Wales Second Fleet in a convict ship, where John showed a penchant for tenacious complaint that was to feature across the rest of his life.

Early in their marriage, Elizabeth showed a skill for diplomacy and smoothing relationships that would flourish in her future. When they arrived in Sydney Cove with their small son, the settlement was not what had been anticipated. Colonists had failed in farming efforts, they had over-hunted and over-fished and everyone was hungry while living on imported flour and salted meat.

There were no other officers' wives for Elizabeth and she needed a soldier to escort her on any excursion. She made the most of her time, becoming friends with the officers themselves, studying botany and learning to play the piano. John earned promotion to regimental paymaster, and travelled in his role as inspector of public works. Elizabeth had a baby girl, also named Elizabeth, and by 1791, a small group of officers' wives arrived.

With this, the land rush began and family life shifted focus. One hundred acres on the banks of the Parramatta River, along with 10 men to clear and cultivate it set a pattern for their lives that was bent on land and stock development, and long-sighted sheep-wool management. It was named Elizabeth Farm and she herself became the manager in all but name.

Tucker sets the political and social scene in each chapter and tells of Elizabeth's active role in this setting. The use of personal letters gives insight into both the context and Elizabeth's thoughts and feelings. For the rest of her life, she is a prime player in the development of their assets and commercial practices.

She manages increasing Merino breeding and sales, development of olive groves and vineyards, sales and wages. She remains a family-focused woman while functioning with skill and foresight in a fluctuating and sometimes volatile commercial and political setting.

This carefully researched history is a highly interesting read that highlights the importance of women in the settlement of New South Wales. It is interesting to compare this Australian life with that of their New Zealand settler counterparts.

-Willie Campbell is a Dunedin educator.

Win a copy
The Weekend Mix has four copies of Elizabeth Macarthur, by Michelle Scott Tucker, courtesy of Text Publishing, to give away. For your chance to win a copy, email playtime@odt.co.nz with your name and postal address in the body of the email and ‘‘Elizabeth MacArthur’’  in the subject line, by Tuesday, June 12.

WINNERS
Winners of Warlight, by Michael Ondaatje, courtesy of Penguin Random House, are Trish Giblin and Abbi Virens, of Dunedin, and L.A. Hunter, of Outram.