Actor awake to the possibilities 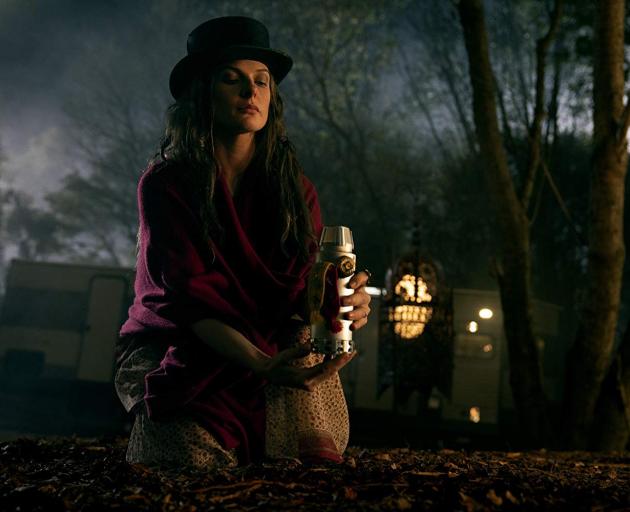 Rebecca Ferguson in Doctor Sleep. Photos: Supplied
She's been in some of the biggest blockbusters of recent years, yet has somehow always remained below the radar. But that's all about to change. Alex Moshakis meets the star of the new Stephen King film, Doctor Sleep.

Rebecca Ferguson is almost entirely convinced the following ordeal is indicative of her true character, her deep-down self, but she struggles with how.

The story goes like this. Not long ago, Ferguson happened to see a woman collapse unconscious, and then she watched panic spread across the face of the woman's husband and ripple on to the faces of the people around him. Although it was not her place, because she is a big-time Hollywood actor and is in no way a medical professional, she waded into the formed crowd, located the woman's pulse (which she could not properly count) and began barking instructions. A stranger suggested water for the fallen woman, but Ferguson shouted, "No! Orange juice!" a tip she'd picked up watching ER. When the crowd edged closer, Ferguson yelled, "Some space, please!" The instructions tumbled out of her mouth before she could think to recover them, one after the other, an apparently natural act, until the woman came to and the crowd broke apart. As Ferguson walked away, someone asked, "Are you a nurse?" And she was forced to say no, she was an actor, that her actions had been formed in make-believe, a revelation she admits could have gone either way.

It was a confidence act, she says now. She is surrounded by cushions in the window seat of a cafe in a plush part of south London, waving her long hands around, being confident. "What I realised," she says, making the realisation all over again, "is that as soon as someone takes control, people feel safe." She looks awed: "Human psychology ..." Then sincere, like she might have done a bad thing: "She could have been dying."

For a while now, Ferguson (35) has been popping up in some of Hollywood's biggest productions. She starred in the 2016 thriller The Girl on the Train, and has appeared alongside Tom Cruise in the Mission: Impossible franchise and with Hugh Jackman and Michelle Williams in The Greatest Showman. She is now starring in Doctor Sleep, a sequel to The Shining and, next year, in Denis Villeneuve's Dune and Lisa Joy's Reminiscence - major box-office events. She has appeared in magazines and on late-night talk-show couches and on big screens around the world. She has likely already made more money than most people earn in a lifetime.

So what is more remarkable: that Ferguson did this weird thing, pretended to be a medical professional at a real-life emergency, thought it would be a good idea to do the thing she is best at doing: acting, making people believe? Or that, throughout the entire ordeal, not a single person realised who she was?

That she was not recognised is not unusual, Ferguson says. She looks around the cafe, where nobody is recognising her. "I never am." It suits her; it is a good thing. Does she enjoy fame? No! Is she private? Yes, completely, so private, in fact, she avoids her own phone, which is problematic for her family when they need to reach her. She says of her phone: "I'm sick and tired of the device," and pours scorn over it. "It's not that I'm tired of technology," she says. "That's too simplistic - it's all around us. It's that I know what I'm like. When I start something I want to finish it. I hate having 400 things up in the air." 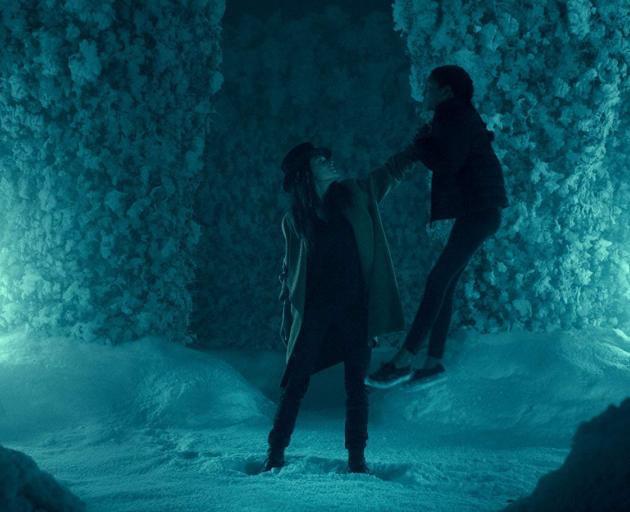 Rebecca Ferguson and Kyliegh Curran share a scene in Doctor Sleep.
So all this time she spends not being recognised is good for her. She is able to "disconnect", which means she can focus fully on "life": her 15-month-old daughter, her 11-year-old son, a house renovation, a house move, work, publicity for work, learning new accents for work, experimenting with new accents for work, all the many things tied into being a "very busy" actor and mum and friend and wife.

For a time, Ferguson was the most recognisable girl in Sweden, but that was her mother's fault. Ferguson grew up in Stockholm, a happy child of separation. Her mother was English and glamorous and loving. Before dinner parties, she would light a cigar, percolate coffee, fill a glass with cognac and sprinkle it around the home. "Like people do now with sage," to create a feeling of warmth. She encouraged Ferguson to try new things: gymnastics, salsa, playing cards. When she was very young, Ferguson was "the only kid in a bridge class, learning to gamble with 70-year-old women". Her mother thought she might have a knack for numbers; she thought she might have a knack for many things. "Bridge is a very cool game," Ferguson says, "if you were born in 1765."

When Ferguson was 15, her mother encouraged her to attend a TV casting. She'd already tried modelling but disliked it so much she never booked a job. "I remember thinking: that's absolutely terrifying. Hated the idea. I would blush just standing in front of my class." But the casting was a revelation. Somehow, she forgot about the camera and the crew - all those people around - and she just started "trying things", changing language, making things more "natural". The job, which she won, happened to be the lead role in a Swedish soap opera, Nya Tider (New Times), that almost everyone in the country tuned into. She filmed five episodes a week for a year and a-half.

She matured quickly, she says. She had become part of "the media". It was fun and exhausting. But nothing lasts. When the job ended, "It was one of those moments of, `Yes, you're a famous soap actor in Sweden, what now?' Most sincere actors go to drama school. They watch Bergman and wear purple berets. That wasn't me. I didn't know what the craft was. I didn't know anything. How do I get a job? I didn't know what a casting director was. Could I look one up? Could I send them my CV?"

What followed was a kind of wilderness, bleak in her telling. She missed out on an important part of youth, she says: "Having sex with lots of people. Doing drugs." For a while, she wasn't sure she wanted to act. So she got other jobs. She worked at a daycare centre and as a nanny. She worked in a jewellery shop and in a shoe shop and at a Korean restaurant. "Some people sharp-elbow themselves through life," she says, "just to get what they want. I never felt that drive, which sometimes made me think I'm not really worthy of the job I do. For me, it's been a slow process."

Her international career is still newish, she thinks, which might explain why, despite having appeared in very major films, few people recognise her on the street. She remembers turning up at castings as recently as five years ago, recording self-tapes, running lines with her mother, who could be counted on to overact. She used to take any role she could get, but "now I get enough offers to be working and complaining about it. In the beginning, you're so grateful you grab and you grab. You need to do all the jobs you can. To be versatile, to meet people. But after a while you get to a point where you can sift things out." She offers me some you-can-do-it advice. "It will get to the point where you can turn down jobs, too. Rebecca Ferguson? No, way ... Unless it's that Liverpudlian singer."

To prepare for her role in Doctor Sleep, a psychological horror film, Ferguson steeled herself to watch other horror films, which was in itself an ordeal, she admits, because she doesn't watch horror films, can't handle them, hates losing control. "I have a bad startle reflex," she says. "If you jump out, I will hit you." Her husband told her she'd be remiss if she didn't research. "I hadn't seen Nightmare on Elm Street. Halloween? F*** off! Because. I. Will. Not. Sleep!" Eventually she relented, on one condition: no clowns, no kids. "Hate the look of a clown," she says. "Hate their need for attention. Hate the sorrow of a clown. And children because, well, children are really scary. And he said, `Let's watch Annabelle.' Which is about clowns and kids!" 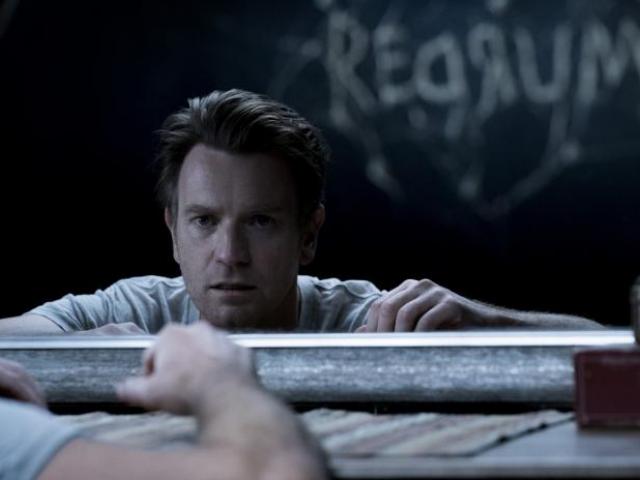 Ewan McGregor as Danny Torrance in the supernatural thriller Doctor Sleep.
The upshot of watching so many terrifying horror films was this: she came to understand that the act of losing control was a positive thing, that her responsibility as an adapted Stephen King villain was to enable people to lose control - that people can't get enough of it. "It's a high," Ferguson says. "The electricity of shock, or fear".

Horror films allow for a managed fear - audiences know the fear will end - and in that way a horror film can function as reprieve from the world, I say, which is an uncontrollable shitshow. "But the world's always been a shitshow," she says. "We think we live in the shitshow, with Brexit, and Trump, and all of the wars. But they battled stuff back in the day. Women not being allowed to vote. Women just being used for various reasons. Slavery. You think we're in a shitshow now? We've constantly been in a shitshow."

She takes a breath, then turns earnest for a moment. "Research the medieval times," she instructs. "Holy moly. Giving birth in dungeons? It wasn't easy, dude."

That is success, she says: being listened to. Does she consider herself successful? Yes! Who cares if nobody recognises her?