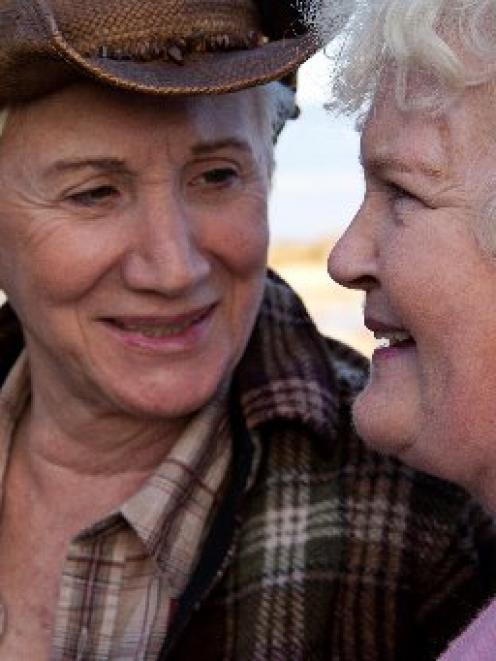 Lessons in love are still needed as you grow old, writes Tom McKinlay.

In the TV show Betty White's Off Their Rockers, there's really only one joke. It's old people doing stuff you wouldn't generally expect old people to do.

And it's funny every time.

Cloudburst takes the Betty White recipe to another level, keeping the funny-every-time part, but asking a few more questions of the viewer along the way.

The film follows ageing same-sex couple Stella (Olympia Dukakis) and Dotty (Brenda Fricker), who set out on a road trip after Dotty's conniving granddaughter moves her into a nursing home.

By that stage the film's already turned the ribald dial up to about seven and a-half, heading for 10 by the halfway point.

There is some of the best use of foul language by an octogenarian ever. Dukakis is responsible for most of it and delivers it with relish.

In one scene she gets to really stretch out, engaging in a lengthy exposition on the joys of that rudest of four-letter profanities.

But it's not all slapstick and cussing, Fitzgerald provides lessons on love, ageing, prejudice, marriage and domestic and elder abuse.

Straight man, in more ways than usual, Ryan Doucette makes a nicely judged contribution, including a particularly fine bit of spotlight larceny as the curtain approaches.

Best thing: Dukakis and Fricker, a couple of old queens of the stage, roll around in the material having an absolute ball.

Worst thing: Movie endings are tricky beasts, and this one felt not entirely satisfying. But it is enormous fun arriving there.

See it with: Your grandchildren.