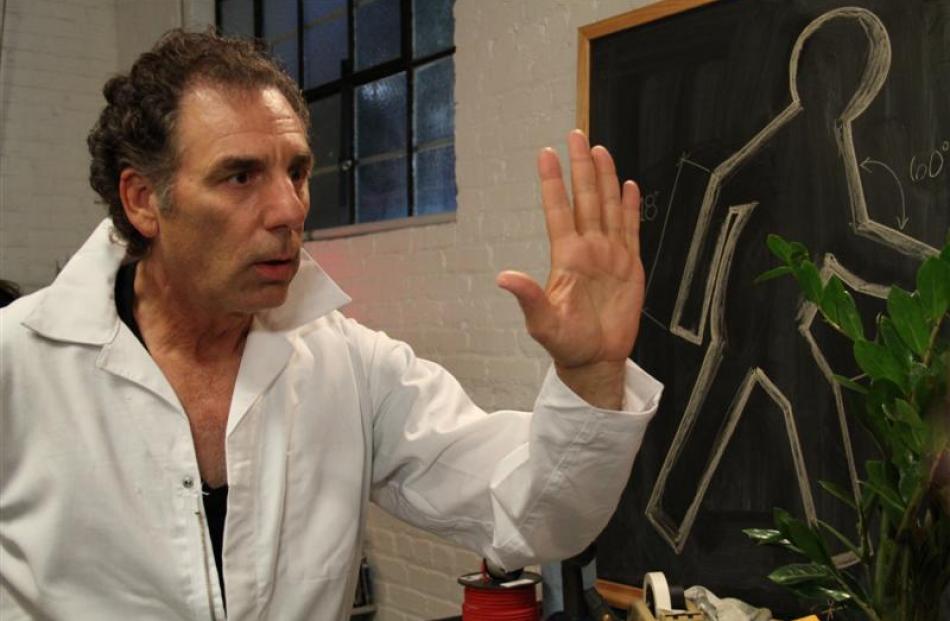 Michael Richards is a pedestrian walk/don't walk man in the short film <i>Walk The Light</i>. 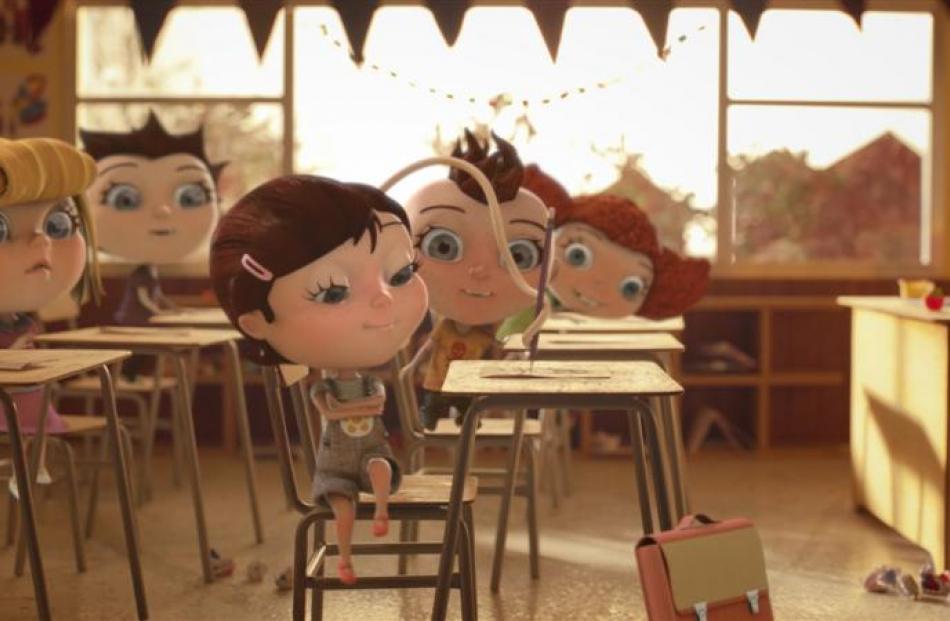 Cate Blanchett provides some of the voice work on <i>A Cautionary Tail.</i> 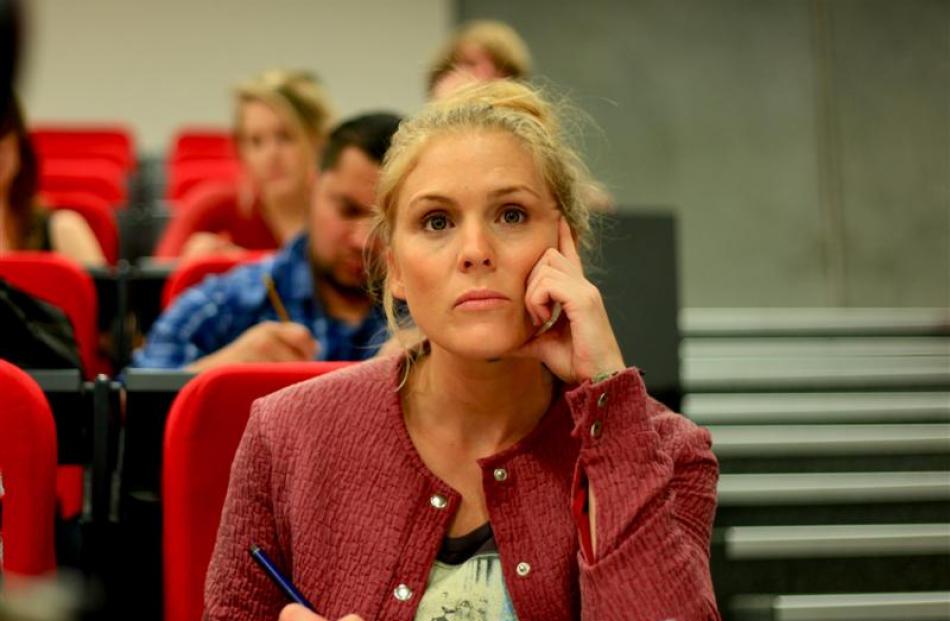 The films in the Show Me Shorts film festival are small and perfectly formed, Tom McKinlay reports.

In the trailer for Walk The Light, actor Michael Richards (best known as serial visitor Kramer in the comedy Seinfeld) leans forward slightly to deliver his line: ''You've got to learn to move like God''.

His delivery falls away as he reaches the word ''God'', leaving the listener to ponder the theological question: ''Did he just say that?''.

He might have. The film is about the real-life men who work inside walk/don't walk pedestrian traffic lights, so pretty much anything after that makes perfect sense.

Walk The Light, a US comedy stretching to 14 minutes, is the first of seven short films in the Show Me Shorts Film Festival ''Highlights'' package screening at the Rialto in Dunedin next Sunday. They are highlights chosen by festival director and co-founder Gina Dellabarca from the much longer list of short films screening in the full festival in bigger centres further north. It is clear Richards' performance tickled her fancy.

''Oh, my gosh, that guy's hilarious. Who comes up with this stuff?'' Dellabarca ponders, laughing.

''I love what comes out of [film-makers'] heads, these crazy worlds. Who would think to set a story inside a walk/don't walk traffic signal box?''

Ms Dellabarca is on the phone talking about the rise and rise of the short film, the format she turned into the Show Me Shorts festival.

This year the festival team watched more than 800 short films in choosing the 40 that made up the programme opening in Auckland this past week. Entries arrived from more than 50 countries.

Those films range from the five-minute animated Mud Crab, part of the Dunedin ''Highlights'' package in which a father and son fish for a mud crab, through to the likes of 16-minute Friday Tigers, which uses real actors in a fairly conventional story arc.

The requirement for festival consideration is to stay between two and 20 minutes, Ms Dellabarca explains. It used to be 30 minutes tops, but that was regarded as a bit long in the end.

''Plus I think increasingly audiences have slightly shorter attention spans,'' she says.

''They have been educated from watching a lot of YouTube videos, so they expect a shorter, snappier style of film-making these days.

''I think there's an international trend towards short films as a medium that people want to watch.''

That played into the hands of director Aidee Walker, of Outrageous Fortune fame, who made Friday Tigers, and walked away from the New Zealand International Film Festival earlier this year with the best short film prize. It is also in the Highlights line-up.

Her film has the sort of storyline that sounds like it could just about make a feature.

''It is a great film about a mother and her daughter, making their way in the world,'' Ms Dellabarca explains.

''She is studying to be a doctor and she has a terrible ex-boyfriend who keeps popping up again.''

Another showing in Dunedin is Flamingo Pride, six minutes of brightly coloured animation from Germany, that ''tells the story of the only heterosexual flamingo in his desperate attempt to find love''.

''It is one joke,'' Ms Dellabarca says, though not pejoratively.

''It is one joke that is done really really well. I guess there are the two kinds of [short] film-making. Either it is one gag or one shocking moment, or else you can try to tell a complete story. The latter being much more difficult to get right.''

While some in the festival line-up speak of a feature film waiting to be made, others would only ever be realised as short works.

''I guess that's why you get some really top international talent still working in the short film medium, because it is a different kind of storytelling,'' Ms Dellabarca says.

''So that if they happen to come up with a story that better fits that genre, it is nice that they still want to explore that.

''There is not really any money in making short films. But audiences love them, there's a growing appetite for them.''

Having done the festival circuit, short films tend to wind up online, though there are a few other outlets, she says.

Like any good film festival, there is a certain amount of star power involved. As well as Michael Richards, the seven showing in Dunedin include voice work by Cate Blanchett, in the animation A Cautionary Tail (14 minutes), about a little girl born with a tail that expresses her emotions.

''These are top stories that are really interesting and detailed, with really amazing talent,'' Ms Dellabarca enthuses.

Another of the Dunedin films, I'm Going to Mum's (12 minutes), in which divorced parents dress their son in ridiculous clothes to spite each other, is directed and written by Lauren Jackson, an experienced New Zealand theatre practitioner.

While short on length, the films do not otherwise suffer by comparison with their longer brethren. Production values are often top-notch.

''There are quite a lot of interesting sci-fis in the festival,'' Ms Dellabarca says, nominating Perfect Drug, from Belgium, one of the films not coming south.

''To do sci-fi well you have to have really amazing cinematography and special effects to back it up. So I guess it involves a lot of favour-pulling. Short films don't tend to have huge budgets.''

Instead, the directors tend to be well connected.

Show Me Shorts is New Zealand's only Academy Awards-accredited festival, which means the festival's best-film winner gets to enter the Oscar race.

It is a good opportunity for New Zealand films, Ms Dellabarca says, which previously had to win an overseas festival to make it to the Los Angeles show.

The film, which is not coming to Dunedin, stars actor Andy Anderson as a lascivious taxi driver telling a filthy story.