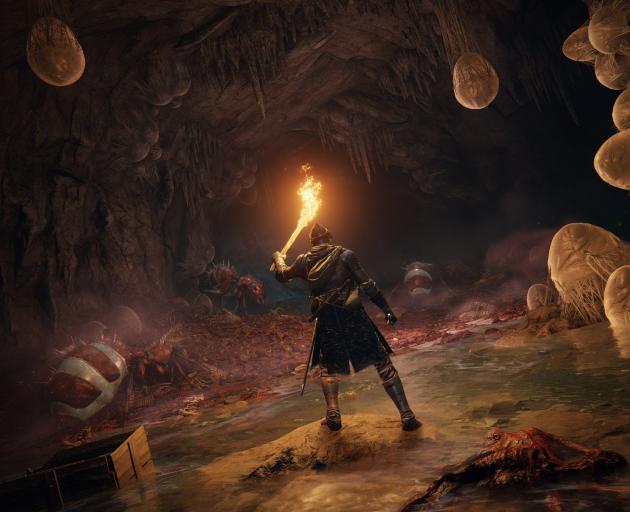 Making the next new discovery — spectacular, scary, or both — is never far away in Elden Ring. IMAGE: SUPPLIED
ELDEN RING

What to do as a game reviewer when you’re not as extremely jazzed about a new release as all your peers? Well, you have to be honest about it, I suppose.

And so I have to reveal that I am not quite as excited as what seems like the entire rest of the world is about Elden Ring, From Software’s magnum opus, current internet meme factory, and presently the fourth-best reviewed game of all time on OpenCritic.

Don’t get me wrong; it’s clear this game is, in its own way, amazing. But that "own way" may not be for you, and if so that’s OK.

Where am I? What am I doing with my life? Who am I, really? They’re important questions in life that as it happens you may also find yourself asking constantly as you play this game. If you like things more spelled out for you, you’ll be largely out of luck as you wander — for much of the time, completely aimlessly — around Elden Ring’s vast and spectacular fantasy world.

What are you up to? Well, that’s another great question. There’s a brief and bombastic introduction which does enough to suggest there’s been some sort of sundering of the world due to a mishap with the titular bit of powerful jewellery, and that you’re a member of the Tarnished, a group of heroes that seemingly everyone also seems to hate. Having chosen from one of the 10 available character classes, that’s all you’ll get before being dropped into the landscape with a vague mission of action-RPGing your way into restoring order to the realm.

In terms of overarching guidance, there’s a system where floaty lights occasionally suggest a direction that points you towards major story points, which also shows up on the map — but that’s about it. You’re completely free to go where you will. This "go work things out" approach is the game’s greatest strength, but — for me, anyway — has also been a bit of a weakness.

Elden Ring is clearly a game made for exploring. Delving into nooks and crannies, making discoveries, and, and running unexpectedly into the game’s hundreds of weird and wild enemies for the first time is where things really shine. You’ll find towers walking around on huge legs, enormous land octopuses, vast castles in the middle of being sacked by demihuman nasties, angry giants striding over the hills, giant burrowing mole-bears, and much, much more besides, most of it determined to impale, flatten or chew you. It’s a truly incredible world and the imagination on display, which also extends to the landscapes and architecture, is seriously cool to behold. "Wow, what the heck is this now, and am I fast enough to run away from it?" is a common reaction.

For yes, in Elden Ring, From Software have retained the level of difficulty that they are famous for bringing into their Souls games. Don’t be fooled by claims of "Oh it’s not that hard when you know what you’re doing" — the game’s combat is pretty punishing plain and simple, and while you’ll get better, there are still many incredibly tough boss fights and systems in place that will sap you of your resources and time for repeated failures. Even rank-and-file enemies can quickly carve through you when they get their blood up. A stroll in the fantasy-themed park it is not; prepare to have to resist the occasional urge to throw your controller. Fortunately, if a fight is too tough, you can at least wander off aimlessly again and come back when you’ve toughened up.

Depending on your class preference, you’ll be focused on melee, ranged or magical combat, with further specialisation like dual-wielding or two-handed weapons also possible. The fighting system is deep, but its deliberate pace takes some getting used to, and those who haven’t played a lot of Souls games — like me — are likely to make a lot of mistakes before they get to any kind of grasps with it

This is where the game’s obfuscating approach can also be a bit more annoying. An unintuitive user interface and general paucity of explicit explanations prove less fun when it comes to mechanically playing the game. Hours and hours into Elden Ring, I’m still accidentally throwing a knife when I mean to drink a potion, and carrying hundreds of crafting materials around that I am yet to discover a use for. Where might I discover recipes that use all these things? Who knows. The "wander around until you find something" approach the game takes never really varies, even when it comes to useful merchants, crucial items, and quest-giving NPCs, with vague clues the most you will get for finding anything. As an example, I spent much of the early part of the game without an extremely helpful ally-summoning ability, seemingly just because I hadn’t happened to visit a location I had already been to multiple times during the game’s night time.

It’s clearly a deliberate and consistent approach the game takes, so fair enough, and many will enjoy puzzling such things out, but has tended to leave me with a nagging feeling that I might be missing something, and — in combination with the punishing difficulty — has ended up making the game feel like work sometimes.

But there’s a reason Elden Ring is a gaming sensation. Memorable triumphant moments and new, crazy happenings are to be found everywhere, and the sense of adventure and feeling of "I wonder what will happen in this play session?" are strong. If you’re not bothered by a game that strictly refuses to hold your hand, you’ll be in heaven — and for impatient thickies like me that prefer a bit more help, there’s always Google.