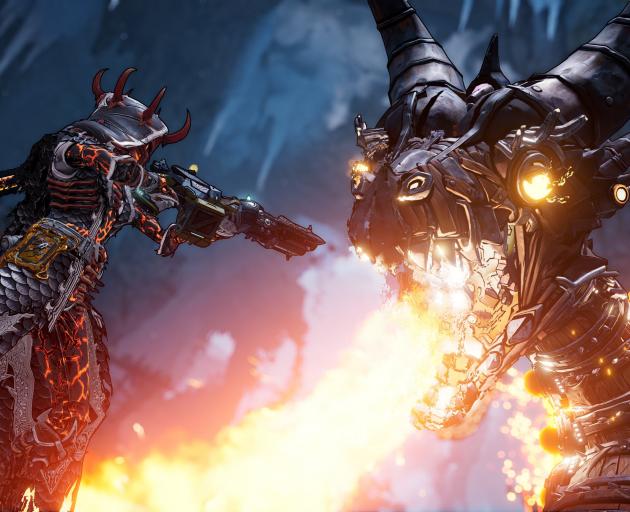 I was apprehensive going into Tiny Tina’s Wonderlands. On the one hand, the character herself I find generally unlikeable and irritating, but the gameplay of the Borderlands series is fantastic. It doesn’t take long for Wonderlands to win you over, however.

Tiny Tina’s Wonderlands takes place in a fantasy land ... of sorts. Tina and her friends are playing a game of Bunkers and Badasses, an obvious nod to Dungeons and Dragons. You’re transported into the game as the hero you choose and play through the tale, narrated (and somewhat controlled by) the unpredictable Tiny Tina. She was introduced in Borderlands 2, and had the spin-off DLC Assault on Dragon Keep, but if you’ve not heard of her, well ... she’s unique, to say the least.

If you’ve played the Borderlands games before, it’s a refinement on the tried and true formula. I think they’ve done really well here — they’ve kept the fun of the shoot and loot, while changing it up enough to make it feel smoother.

Some more improvements have been made to the game mechanics as well. Traversal is easier thanks to the ledge grab, the guns and how the enemies react to being shot by them have improved, and overall it just feels more polished.

The story is pretty clever as well. Tina’s complete unpredictability will be divisive to some — I didn’t like it much in the previous games, although seemingly it was more tolerable in this one — but what that does provide is a fun game experience. Soon Tina’s game is overcome by the evil Dragon Lord, voiced by the superb Will Arnett, and throws the entire game into chaos. It’s a game that doesn’t take itself too seriously, and while mostly juvenile, occasionally has moments of charm.

One such standout new feature is the dungeon-crawling aspect, where you view your character from top-down perspective, walking around Tina’s makeshift gameboard. The world looks fantastic and the little details are hilarious, and well thought out, Bottlecaps as bridges and various pieces of stationery and general trash repurposed as game elements will make you laugh.

On the PS5 and Xbox Series X, this game looks beautiful too. It runs very well, loads fast, and generally is a sight to behold. There’s several visual flourishes that really showcase the power of the new consoles and what they can achieve. Four player co-op (a standard for the series) returns, and is every bit as fun as always.

I think the game’s strength is that if you like the Borderlands series of games, Tiny Tina’s Wonderlands is another great entry — a rollicking adventure through the craziness of her mind, while taking cues from the extremely popular Dungeons and Dragons, but this also is potentially its biggest drawback.

If this was your first introduction to the series, the amount of nods to previous games and characters would be completely lost on you and perhaps some of the enjoyment of the game would be missing as a result. If you have no idea why there’s a unicorn called Butt Stallion in the game,the humour of its inclusion is going to go sailing wide of the mark.

That being said, it a welcome addition to the series in my opinion, particularly for those looking for co-op experiences that you can chip away at.

- Tiny Tina’s Wonderlands arrives with a timed-exclusive PC port, similar to the previous entry in the series. In this age of mediocre PC ports, it’s a good showing, though not without faults.

It ran at a solid 60fps throughout most of my sessions with it, with minor drops coming from when the particle effects covered the whole screen briefly, like shattering a frozen enemy into pieces while close to them. There’s also the normal initial DirectX 12 stutters, however you can switch to DirectX 11 in the options. There are no DLSS options however, so those with lower spec machines may have to scale back a lot.

For those who like numbers, there’s a lovely benchmark tool as well. My average FPS was a respectable 72 on the standard "High" settings, more than enough. Loading times were decent on a standard SSD, ranging from 5-10 seconds for most loads.

There’s some noticeable graphical weirdness when you load into an area, with things initially being a blotchy mess before they right themselves after a few seconds.

My main issue was a really annoying mouse cursor problem in the menus. You can have your cursor on the option and be clicking away with nothing happening. You actually have to place your mouse slightly to the left or the right to get it to register.

Overall, it’s a decent port, with some small issues which I believe future patches can iron out. — Michael Robertson