Skateboard trick does the trick 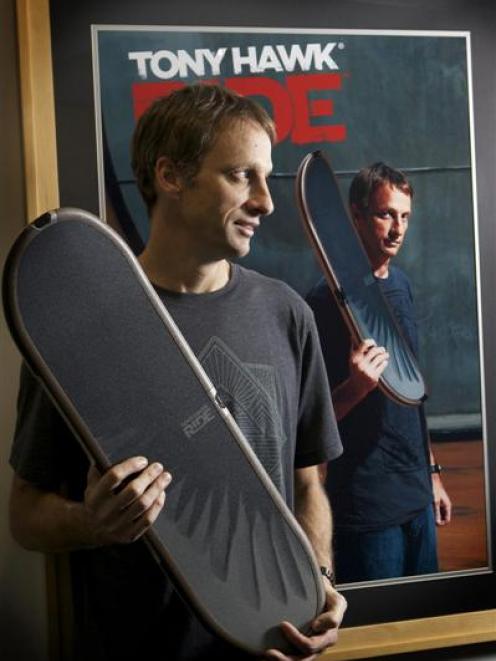 Tony Hawk has come out with a new game, 'Tony Hawk: Ride', that adds a new trick to his virtual routine - a skateboard controller that looks like the real thing but without the wheels. Loaded with high-tech sensors, the controller gets players off the couch and doing flips on the floor. Photo from Los Angeles Times.
Tony Hawk, the former professional skateboarder and the name behind a billion-dollar video-game franchise, hasn't had a runaway hit in a while.

But last week, Hawk came out with a new game, Tony Hawk Ride, that includes a new trick to his virtual routine - a skateboard controller that looks just like the real thing without the wheels.

It is due to be released in New Zealand on March 26 next year.

Will it be enough to revitalise the 10-year-old series?Hawk's past titles have sold about 43.5 million units worldwide, generating more than $US1.5 billion ($NZ2.1 billion) in sales for its publisher, Activision, according to market research companies NPD Group Inc and Gfk Chart-Track.

So two years ago, Hawk (41) and Activision decided to take a different path.

They switched from the franchise's longtime developer, Neversoft Entertainment in Los Angeles, to Robomodo in Chicago.

And they added a sophisticated controller.

Hawk, whose house has a custom-built skate park, spoke to the Los Angeles Times about his latest game and whether he thinks players will spring for it.

Here's an edited version of the interview:

Question: It's been two years since the release of the last Tony Hawk game. How did you go about making this one?

Answer: I brought this idea to Activision a couple of years ago. They put a whole team together just for this project. We first had to design a controller for the game. Once we got the board designed, we built the game around that. It was a backward process for me. And it was too much to do in one year.

Q: What gave you the idea?

A: I felt it was the next step in interactivity. I felt the technology wasn't ready for it in the past. They tried to create peripherals for existing games, and that wasn't the right approach. In the past, you had the controller in your hands and you were doing the Simon Says thing with the buttons. Then I saw the success of Guitar Hero and the ability to hold on to a peripheral to play the game in a way that's closer to the actual thing.

Q: You switched developers for this title. Why?

A: Neversoft did all of our previous games, but they were deep into the development of Guitar Hero and the sequels for that. To be honest, they felt they had gone as far as they could with the genre. And I felt like it could use some fresh ideas.

Q: How does the skateboard controller compare with the Wii Fit Balance Board?

A: The Balance Board only measures weight distribution. Our controller measures every motion. Every time you lean, kick it up, or step off the board, it knows that. It has two accelerometers in it to track motion, and it has an infrared sensor so it knows if your hands are near the board, or if your feet are off the board pushing alongside it. But I hate comparing it to Wii Fit, because I don't think they're the same at all.

Q: Tell me about what you went through to create the skateboard for the game.

A: We have a graveyard of prototypes. The first version was a blank skateboard with the equivalent of a Wii remote. We tried roller balls that you could slide your foot on and digital compasses that can tell which direction your board is pointed in. We also tried adding a camera. We also had a board with buttons that you could step on, like with Dance Dance Revolution. With one of our first prototypes, I tried to do a kick flip on it. It's a manoeuvre where you jump in the air, and make the board do a full rotation. The board snapped in half.

Q: Do you worry that it might not sell well in the current economy?

A: I feel once people get on it and try it, they'll understand it's not a gimmick. We also created a hardware platform for other games to be developed around. Knowing that, people will understand its value.

Q: Are you planning a sequel?

Q: Were you trying to get kids to do more exercise with this game?

A: The initial goal was not to do that. But once we figured out the board, we learned that it is a physical activity. If you play a level over and over, you will get your heart level up. It is fun to think that we're getting kids to get up and get active.