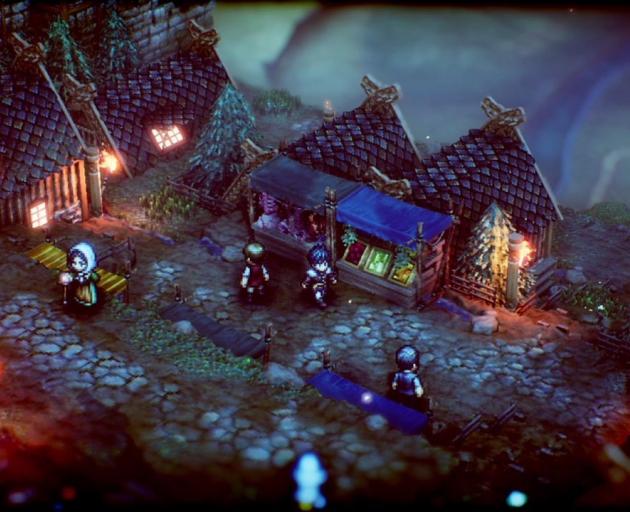 Triangle Strategy really frustrated me, then somehow became my favourite game on the Switch.

It avoids the flaws of its JRPG predecessors to provide a tight, addicting experience. You just have to learn to love it.

In the Game Of Thrones-esque world of Norzelia three kingdoms scheme away as a 30-year-old peace treaty teeters on the edge of collapse. Each realm controls a vital resource the others cannot live without.

It only gets more complicated and the game does little to ease you into it. From the get-go you’re introduced to lords and kings, hierophants and saints, ministers and archdukes.

The world seems overwhelming at first

but Triangle Strategy gets all the introductions out of the way in one blow. It trusts that you’ll get it eventually.

By the time war breaks out you are prepared to understand the world and how it progresses from there.

It took me 37 hours to beat, with the route I took. Most of that time was spent being hunted, paranoid about allies and genuinely unsure what step to take next.

And there are many steps to take, as your choices will decide the future of the land.

Those choices are decided in an interesting way. You play as Lord Serenoa Wolffort, of House Wolffort, which follows a tradition of using a democratic process to decide what to do next. The twist? You don’t get a vote.

Each major decision is split into two or three paths. Some of these seem obvious. Many had me putting down my controller and going for a walk outside while I considered which was the moral path.

Would you rather preserve loyalty, or lives? Be complicit in heinous acts, or risk running your house into the ground? You carry the weight of your fiefdom on your back.

You must hear each character out on their opinions and push them to change their mind if you disagree. How convincing you are depends on how you have played Serenoa previously, as well as what extra information you have found while exploring and what dialogue options you pick.

But it’s not as simple as spending time finding each piece of information. Sometimes that secret note you found or that rumour you heard is the wrong thing to mention, and characters will be even more dissuaded. It requires a thoughtful approach.

By the end of the game you’ll be sweating as your council votes, hoping they came over to your side.

Those council members are also your friends and fighting companions.

Each of the characters felt realistic and fitting for a feudal fantasy setting. Some have deep deep loyalties to their respective liege, while others fight for ideals alone. Those ideals will clash as the war progresses.

And you’re not just leading the war effort, but fighting in it.

The combat looks and feels incredible. It achieves a perfect balance of nuance and simplicity that puts other games to shame.

You issue commands to each of your party members, each of which has a unique skillset. Some are faster while others hit harder, some ride giant eagles and others cast spells. Each of them needs to be carefully placed on the battle grid and faced the right way to avoid being stabbed in the back.

It’s tough, but not unfair.

A lot of the strategy comes from learning how to manipulate the turn order. Pushing enemies back and bringing your heavy hitters up front is how you survive.

You can upgrade characters’ weapons and skills, but there is very little in the way of material buffs, such as armour.

Removing all of the extra inventory and class micro-management results in a game that never feels bogged down by min-maxing or resource management.

Triangle Strategy finds a rare sweet spot between a complex story and a simple play style that makes it a joy. It takes a while, but once the ball gets rolling it never stops. I came home looking forward to playing it every day.