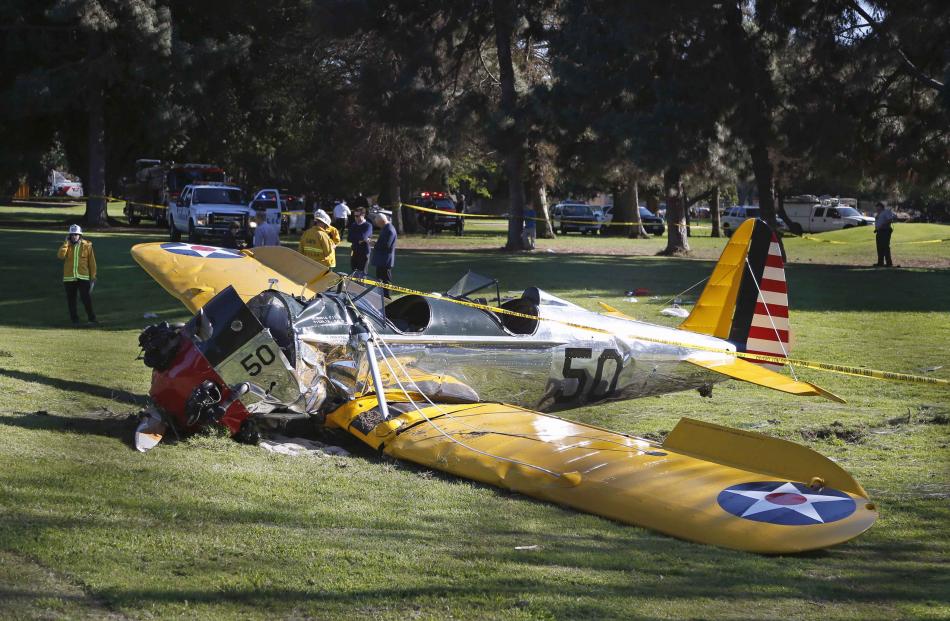 Actor Harrison Ford had to be pulled from his vintage World War Two aircraft after his crash landing at a Los Angeles golf course because the plane was leaking fuel, a surgeon who came to Ford's aid said in a television interview.

Ford's 1942 single-engine plane took off on Thursday (local time) from Santa Monica Airport, and a short time later he reported engine failure to air traffic controllers and turned around in an attempt to return. He clipped a tree and crash landed short of the runway at nearby Penmar Golf Course.

The 72-year-old actor, who starred in some of the biggest films of the 1980s, is expected to make a full recovery from injuries that his publicist said are not life threatening.

Fire officials have said Ford was taken to a local hospital, where he was listed in fair to moderate condition.

Spine surgeon Sanjay Khurana told ABC News in an interview that aired on Friday that he was playing golf when the plane came down on the course.

"He's obviously an iconic individual and when he lay there as I was trying to check his airway, his blood pressure, it was obvious by his face it was Harrison Ford," Khurana told ABC News about the star from the "Star Wars" movie franchises.

"He was obviously moaning and in pain," the surgeon told ABC. "My task, if you will, was to get him out of the airplane in a somewhat urgent manner because the fuel was leaking."

The plane remained at the crash site on Friday morning as the National Transportation Safety Board and the Federal Aviation Administration investigated what caused it to come down.

A witness video of the crash posted at celebrity website TMZ shows Ford's plane gliding down toward the golf course as spectators express concern, with one man saying "I hope he's going to make it."

Ford, who created the iconic character of archaeological adventurer Indiana Jones in "Raiders of the Lost Ark" and its sequels, is a longtime pilot.

The crash, which saw the actor's plane come down a short distance from houses, follows years of complaints by residents in the heavily populated beachside community where the airport is located who say it interferes with their quality of life.