On the floor: Renderers returning 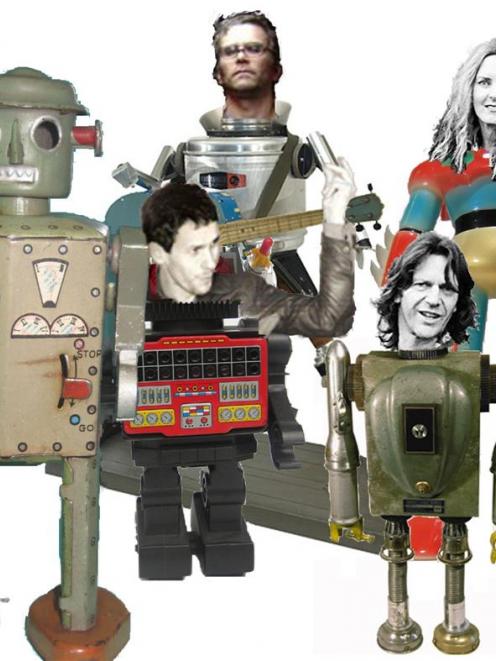 The Renderers. Photomontage Supplied.
It's been ages since the Renderers played in Dunedin - they estimate it was about 2006 or maybe even 2005.

Maryrose Crook and husband Brian are the core of The Renderers and lived for many years in Port Chalmers, before returning to their home town of Christchurch in t2006.

"We came to Christchurch in 2006 on a summer holiday, I was applying for residencies and got one at Rangi Ruru [High School] weve been here ever since, then [daughter] Rosa Pearl turned 5 and began school, so we stayed," she said.

The Crook family later spent three months in China, where Mary-Rose had a residency after winning a Wallace Art Award.

After that they continued to Berlin and the United States, where they played South by Southwest. The family then returned to Christchurch, setting up in Charteris Bay on Banks Peninsula about a year ago.

Maryrose Crook says they've just had one CD released, and have another in the pipeline. American company Last Visable Dog have put out Monsters and Miasmas, and she expects a live album to be coming out in the new year.

With Crook and Crook at the core of the band, they recruit rhythm sections almost at will. However, Maryrose Crook says the current line-up should make for great listening and viewing.

"Stefan Neville's on drums, he's very flexible, and Sean O'Reily on bass are playing well. During one song recently Sean began howling like a dog: it's been kinda crazy".


COMING UP
> Tonight The Bats play with David Kilgour and The Heavy Eights, The Puddle, and Haunted Love at Sammys.
> The Bats are playing a Sunday afternoon gig at Chicks s Hotel, in Port Chalmers, tomorrow.
> The Renderers play at Chick on November 13.