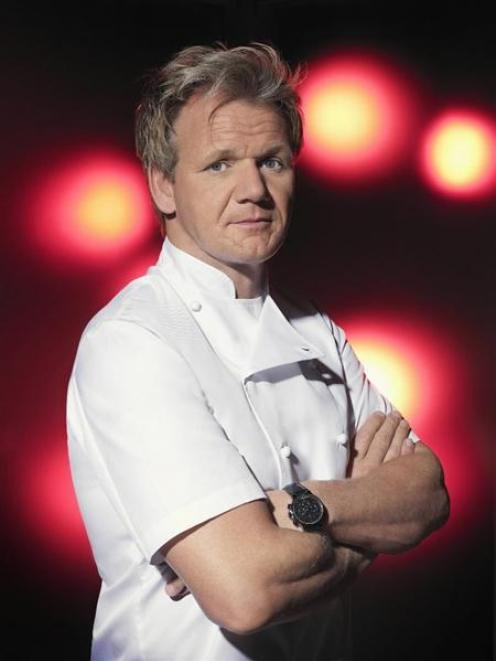 The Scottish-born chef widely known as the acerbic star of reality show Hell's Kitchen is trying to show me how to cook salmon-stuffed tortellini.

But we've barely started rolling the dough into long, chamois-width garlands when the machine's handle comes off in my grip. Twice.

When things like this happen on the show - and really, such kitchen mishaps are pretty much the point of Hell's Kitchen, on which the master chef scouts a suitable protege from a platoon of eager young apprentice cooks with diverse aptitudes - Ramsay turns the whole experience into a teaching opportunity.

He will get very red in the face, race up to the offending student chef and bellow some helpful advice in his or her ear - in terms usually spiced with a four-letter word or two.

So, standing there with the pasta-roller handle in my hand, I brace for the hurricane of Ramsay's loathing.

Would he try to psych me out, the way he does contestants on the show? Would he tell me I'm worthless and have no self-respect? To get the (expletive) out of his (again with the expletives) kitchen?Close.

"Now he's broke my [expletive] machine," Ramsay announces to an assistant and the show's publicists, who are standing nearby at the show's Culver City set, a mock restaurant used only for the show.

Luckily, he's just pretending to be angry. I think.

Along with Top Chef, Hell's Kitchen is one of the best-known of the many reality cooking shows that over the past few years have bubbled across the airwaves like so much Bernaise sauce.

In the rarefied world of fine dining, Ramsay (42) is a very big deal.

His eponymous restaurant at the London hotel in West Hollywood is part of a mini-empire that has vaulted him into the ranks of celebrity chefs.

His restaurants have earned 16 of the elusive Michelin stars, a measure of critical acclaim exceeded only by Alain Ducasse and Joel Robuchon.

His Gordon Ramsay Holdings controls multiple outlets in the United States and Britain.

Britain's Sunday Times in 2007 estimated his personal fortune at more than $US100 million.

Yet his unique contribution to television consists of his very British ability to deliver forceful criticism in tart, memorable and often funny terms.

Recently, British regulators complained that Ramsay used various iterations of the f-word 115 times in 40 minutes during a show.

He does for the cooking-show genre what Simon Cowell does for American Idol.

Hell's Kitchen is mostly about tyros learning to suffer the master's abuse.

"When he's on Hell's Kitchen, he's on a mission to find somebody," said Arthur Smith, who oversees both series with producing partner Kent Weed.

Our encounter does not begin promisingly.

The chef throws me an apron that I fumble to put on.

"How does yours look like a sack of [expletive] and mine looks great?" he wonders.

"There's nothing worse than a scruffy chef. And you haven't even started cooking!"

Then I make a hash of the pasta-rolling procedure, and Ramsay cracks, "Take your time - we're here till Sunday."

But once I get the hang of it - and figure out that the pasta roller's hand crank is not supposed to be bolted to the machine but rather works like a wrench, meaning it can snap off easily - some praise finds its way to Ramsay's lips.

"It's like sheets of gold," he says, holding the pasta by the backs of his hands to avoid any rips or nicks in the dough.

The trickiest part is folding the tortellini once Ramsay has cut the dough.

"Squeeze all the air out! Really important," he says, wrapping a tiny stuffed pasta around his finger.

"So we've got half a crescent. Up onto your finger, left to right, right to left."

I can't follow the movement. My pasta will not stick together. The pureed salmon is spilling out.

My fingernails are leaving tiny tears in the dough, which will cause the tortellini to burst while cooking.

But a few minutes later, after the chef has removed the tortellini from a pot of boiling water and laid them over a bed of diced cherry tomatoes, the lesson has a happy ending.

The dish tastes fabulous, with the tomatoes providing just the right tang. It is hard to believe I did it. Of course, I didn't. But Ramsay isn't entirely unconvincing in his praise.