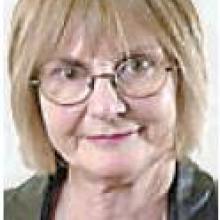 Rory's dad was a geography teacher, fascinated by the Arctic and polar exploration, but he never made it to the North Pole.

Now he's died in an accident, and 15-year-old Rory decides he's going to get there. Armed with mum's credit card and the urn containing dad's ashes, she sneaks out of the house.

What happens after that, in Tatty Hennessy's award-winning play, makes a wonderful story, and Laniet Swann, as Rory, does a wonderful job of communicating her typically adolescent blend of sweetness, bravado, confidence and awkwardness.

She shares her father's Arctic interest and is well informed, including knowing that there are not 100 words for snow, and understanding the implications of melting ice, but nothing prepares her for the awe and astonishment she will experience.

Occasionally, a word or two gets lost, but Swann's performance is always a joy.

Her accent is impeccably that of an English schoolgirl, except when, again highly believably, she adopts the accent of the Norwegian people who sometimes help her.

A Hundred Words for Snow is produced by Moose of Fire Productions, and directed by Ellie Swann.

Changes in time and place are conveyed effectively by Martin Swann's lighting design.

This is Laniet Swann's first major stage appearance and I hope to see her again, soon.

Yesterday afternoon's audience of about a dozen appeared to enjoy the performance as much as I did.

A word of warning: although the play is about a 15-year-old, it contains a scene that may make it unsuitable for younger teenagers.