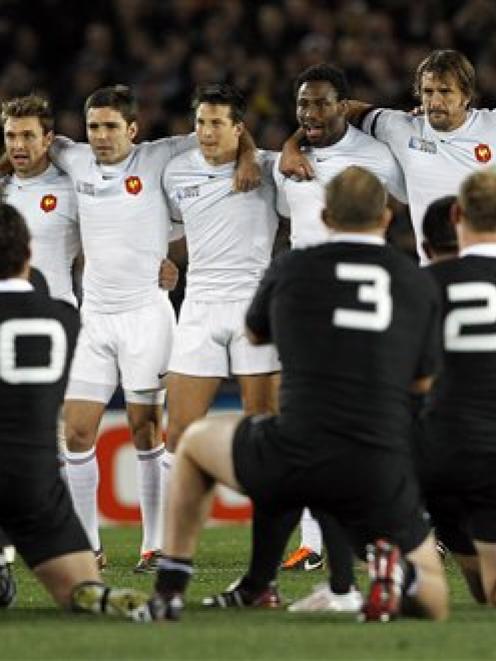 The All Blacks perform the haka as the French team approaches. (AP Photo/Christophe Ena)
France are likely to be fined about $5000 for linking arms and advancing on the All Blacks' haka before Sunday's Rugby World Cup final.

France captain Thierry Dusautoir said the team had tried to make a statement by forming a V at the 10m mark and walking up to the halfway line midway through the haka.

But several members of the team stepped beyond the line, breaching an International Rugby Board regulation for the World Cup.

"At one stage we were so close to them that they wanted to kiss the New Zealanders, but I told them to take it easy,'' Dusautoir said.

The team only finalised their plan on the morning of the match, he said.

"It was a great moment and a moment we will remember all our lives.''

A final decision is likely later this week.

Coach Marc Lievremont said Dusautoir had tried his best to prevent players stepping over the line.

"He tried to stop them, there was a bit of movement bringing them forward,'' Lievremont said.

The Telegraph's Iain Payten wrote that a fine would be "money well spent'' for France.

"It was exactly the same technique the French team used against the Kiwis in 2007 before they knocked them out of the quarter-final,'' he said.

"And again it seemed to rattle the All Blacks. The French players began the game strongly and appeared to have knocked the host nation off its balance in the first half.''

Before the tournament, the IRB responded after Ali Williams stepped over his 10m mark during a haka and said teams had been made aware that fines were on the table at the cup.

The board laid down ground rules in 2007 for tours that both challenging and accepting teams had to stay behind their 10m line.

But during the World Cup the rules were amended so opposing teams were allowed to stand on the halfway while the team making the "cultural challenge'' had to stay behind the 10m line.