'Having too much fun overseas' 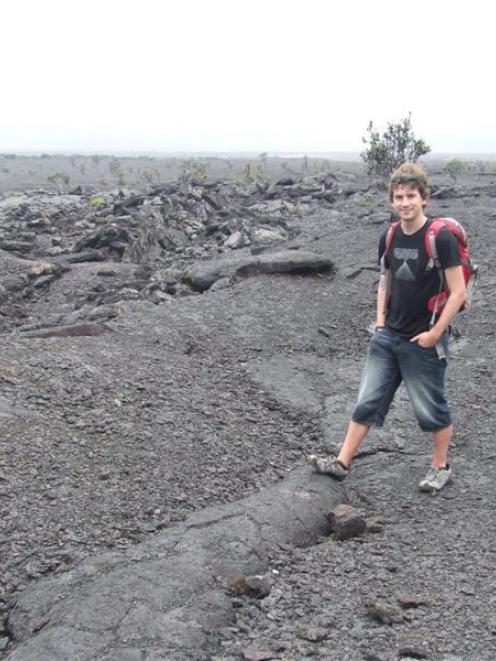 Both are geoscientists, so popping the question in the caldera of Kilauea, one of the world's most active volcanoes, was "pretty cool", he says.

The former Kings High School pupil was in Hawaii studying the morphological characteristics of a lava flow from Mauna Loa, in 1984.

This week, he returned to Canberra, where he is in the second year of a PhD in geological fluid dynamics and physical volcanology.

The Research School of Earth Sciences at the Australian National University is considered one of the best experimental research groups in geophysical fluid dynamics in the world, he explains.

"Members of the research group I'm in study everything from climate and ocean modelling to magma chamber dynamics, and we regularly collaborate with visiting scientists from further afield."

Robertson studies the processes involved in both the solidification and subsequent melting of flows once they have erupted from a volcano, and the conditions under which they form channels and lava tubes.

Because this evolution is controlled by many factors, from temperature to lava composition, he normally uses wax to model the process rather than study real lava flows in the field.

The work has important implications for assessing hazards on volcanoes, he says.

Information from the research is also useful when interpreting older prehistoric flows, both on Earth above the ground and in more hostile environments such as the sea floor and other planets and moons in the solar system, such as Venus, the Moon and Io, which can only be accessed by unmanned vehicles or satellite probes.

Back in 2002, when he received an Otago Daily Times Class Act award, Robertson was interested in studying jazz or forensics.

He found out about geology as a subject when he visited the University of Otago at the end of his sixth-form year and heard about the research group he is now part of from a staff member while completing his undergraduate degree at Otago.

"The best thing since leaving school has been moving from learning from textbooks to learning through research," he says.

"I've enjoyed the chance to think really carefully about a single topic for a long period of time. And one bonus has been the opportunity to learn about things which interest me, rather than my teachers or lecturers.

"The biggest challenge ... is learning that you're a very small fish in a very big pond.

"In many ways, it's also the best part about leaving Dunedin, because you can finally see how you fly against the rest of the world, and you can often be pleasantly surprised.

"With that in mind, I would suggest that it is pretty important for any young scientist in New Zealand to get some overseas experience before coming home again."

New Zealand universities generate well-rounded graduates who can operate in a range of fields but in a small country it can be difficult to find the opportunities available overseas, he says.

"Personally, I would love to return to New Zealand five to eight years down the track, but I'm having too much fun overseas at the moment."