It is her wedding anniversary. It is also the date New Zealand went into lockdown last year, and when she decided to start her most ambitious project yet.

This year, it will be the date she puts the finishing touches to a hand-stitched dress that has taken her thousands of hours to make, and wear it in public for the first time. 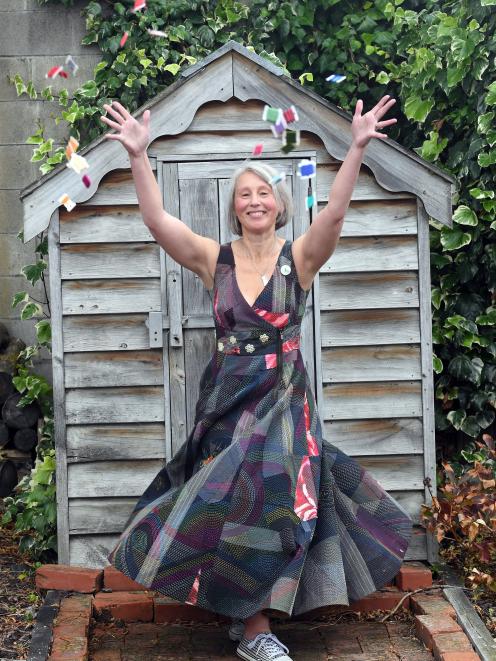 Stitchmaster Judy Ross models the dress that took her a year to hand-sew. PHOTO: STEPHEN JAQUIERY
Made from recycled fabric, the dress featured embroidery inspired by the events of the past year, Mrs Ross said.

She added a poppy on Anzac Day, a cake on her birthday and a tree on Christmas Day.

"I had a general plan, but made most of it up as I went along."

The final addition would be the date of her wedding anniversary, which she was sewing inside the dress this week.

The project kept her busy during lockdown, and she continued with it at weekends once restrictions eased and she returned to her job in retail, she said.

She had no idea how many stitches were in the dress, but intended to count them one day.

As a 51-year-old, it was important to represent people her age who created clothing, Mrs Ross said.

Regular Instagram updates of her work led her to connect with like-minded people around the world, and she had gathered a loyal following.

A large ceramic button on the dress was a gift from a fellow Instagram sewer in England.

"The community was really supportive."

The dress was mostly made out of second-hand men’s trousers, and the backing was recycled from an old sheet.

She was particularly proud it had pockets.

It was the most satisfying project she had ever completed, Mrs Ross, who also makes all of her husband’s underwear, said.

"I loved every minute of it."

She would be wearing the dress tonight to get takeaways for their anniversary dinner, and she hoped the weather would be good enough to eat on the beach.