How to make beef rendang 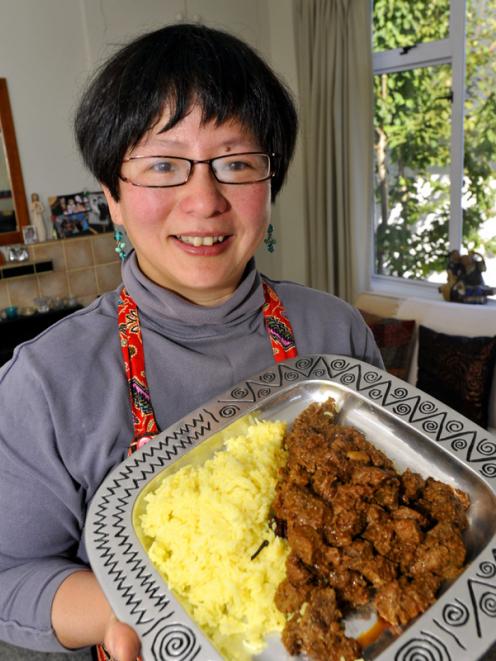 Dunedin chef Karen Khoo, originally from Singapore, with her dish of beef rendang. Photo by Gregor Richardson.
Karen Khoo, her husband Nicholas and their daughter Ellena came to Dunedin in December 2010 because Dr Khoo was to lecture at the University of Otago.

Although originally from Singapore, they have lived in the the US and UK for many years. Karen says she only learned about cooking when she left Singapore and they longed for food from home.

Beef rendang, a dry curry, is originally from Indonesia but is a favourite in Singapore. It is eaten for lunch or dinner with rice and side dishes. The flavours are complex and the curry will keep for a week or more in the fridge.

Karen's mother used to pound the spices in a mortar and pestle, which releases the essential oils and makes the dish taste better, but it's quicker to do it with a food processor, she says.

Grind the coriander seeds, cumin seeds, onion, chillies, ginger and coconut until a paste has formed.

To make the rendang:
Heat a pot, add a tablespoon of oil, then stir in the spice paste, the meat and the coconut milk.

Bring to the boil and reduce to a simmer.

Bruise the lemongrass stalks by hitting with the back of a knife. Remove the centre ribs from the kaffir lime leaves and chop. Peel and slice the galangal root, and slice the turmeric. Stir into the stew.

The stew will take 1 to 2 hours or more to simmer until the liquid has reduced and begins to fry slowly in the oil left in the pot. You know you've got it right when the oil is visible on the top and the gravy is shining.

Tips
• Karen's mother taught her a tip she'd learned from her mother-in-law. Use the side of a teaspoon to scrape the skin off the ginger root. A peeler removes too much of the flesh, she says.
• If using frozen lemongrass, you'll need a bit more as it loses some flavour in the freezer.
• Fresh kaffir lime leaves are best, but frozen are good. Dried ones have little flavour.
• Galangal is a rhizome like ginger but with a different flavour, and can be found frozen in Asian supermarkets.
• Turmeric is a root, and can be found frozen in Asian supermarkets. You could substitute a teaspoon of turmeric powder.
• Karen likes to flavour rice with a little cinnamon, cardamom, star anise, a couple of cloves and a little turmeric for colour. The flavours go well with the beef rendang.

• Thanks to Afife Harris and Gardens New World.