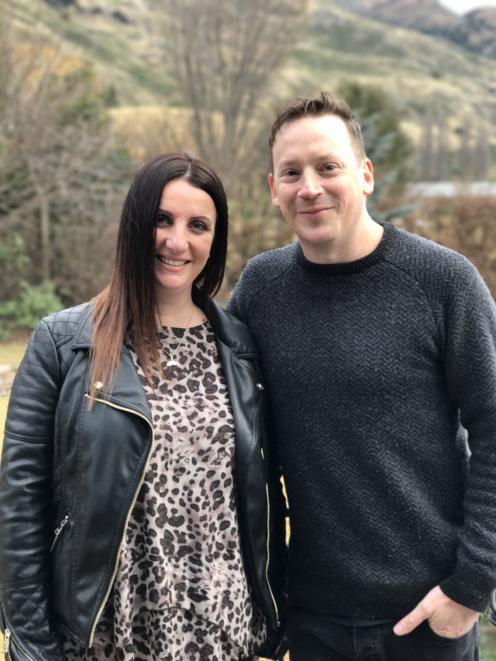 Kika co-owners Francesca Voza and James Stapley. Photo: Supplied
More Otago restaurants than ever before have been named in the Cuisine top 100 restaurants for 2017, Rebecca Fox  finds.

Otago is following the national trend of regional restaurants catching up on their metropolitan counterparts.

Twelve Otago restaurants, including the 1-year-old Kika in Wanaka, have been named as finalists in the nationwide restaurant awards programme, up from eight the previous year and seven the year before that.

They are in the running to receive a ''hat'' and one of the top national awards at a ceremony in August.

Ever since the awards were renamed the Good Food Awards and the ''hat'' rating system was implemented in 2013, Otago has rated solidly against its northern peers.

Amisfield, at Lake Hayes, which won the best winery restaurant award in 2013, has been runner-up in that category most years and last year received two ''hats''.

Riverstone Kitchen, in Oamaru, which in 2010 won top restaurant in the forerunner to these awards, has also appeared every year, including as runner-up to best regional restaurant in 2014, and has received one ''hat''.

Celebrity chef Josh Emmett's Rata has also made the list every year and received a ''hat'' each time, including best regional runner-up in 2013.

This year joining them on the finalists list are Dunedin restaurants Bracken, which won the city's first ''hat'' in 2015, No7 Balmac and Two Chefs Bistro.

But the Lakes District is showing the most growth with newcomer Kika, a tapas restaurant in Wanaka, making the cut for the first time, joined by Queenstown's Botswana Butchery, Fishbone, Madam Woo and Sherwood.

This year in North Otago, Riverstone is joined by Fleurs at Moeraki.

''We are very proud to be in the top 100, it's a huge achievement in the first year of being open. The staff have worked extremely hard and we are really proud to represent Wanaka and the Otago region,'' Voza said by email from Italy where the owners are working on a cookbook.

Through the judging process this year, chief judge Kerry Tyack has noticed a trend as restaurants in the regions were closing the gap on their metropolitan counterparts.

''What we typically see on offer in urban areas we are now seeing appear in regional areas too. Travelling Kiwis don't all just come home to the cities, they go to the regions, and they are demanding more variety. Restaurants are popping up to meet that demand,'' he said.

''Whereas the trends used to be led by the urban restaurants, now the regional restaurants are much more in tune with what is going on.''

A category for Best Casual Dining Restaurant has been added to the awards to better acknowledge a growing trend in restaurant excellence found in more casual settings.

''There are so many places serving up excellent food and wine and craft beers, but not necessarily in a formal setting. They still have that level of excellence of food and drink and service, but you are not going to walk in the door and get linen table cloths.''

The awards are not only about New Zealand celebrating the best of its own, they also provide a guide for international attention on New Zealand cuisine, she said.

Both she and Tyack believed at least a couple of the country's top restaurants were deserving of a spot in the world's top 100.

''We have restaurateurs all over the country doing incredible things and in a highly competitive industry, it is really something to be recognised at this level.''