Plenty to discover about iron absorption

Iron is a key component of haemoglobin, the red colouring in blood cells and in myoglobin (muscle protein), and one of the important minerals we need to take in through food.

Low iron levels can affect the immune system, and make you feel grumpy, tired, cold and have trouble concentrating.

It can affect brain growth and development in toddlers and brain function in older people as well as impairing performance in sport, but iron deficiency often goes unnoticed by many New Zealanders.

The Iron Awareness Week campaign, funded by Beef and Lamb which supplied all the information and recipes on the website, ironweek.co.nz, encourages eating red meat for iron.

It is generally acknowledged that red meat is the easiest source of the mineral, and some of its iron is well absorbed by the body.

However, it is perfectly possible to have a healthy, iron-rich vegetarian diet according to Sarah Hanrahan, dietitian at the New Zealand Nutrition Foundation.

Iron also comes in many plant foods: oats and other grains, legumes such as beans, lentils and chickpeas, tofu, nuts, seeds such as pumpkin and sesame, fruit (dried apricots and prunes), leafy greens (spinach, silverbeet and parsley) and cruciferous vegetables, such as broccoli, cauliflower, cabbage, kale and Brussels sprouts.

There are two sorts of iron in food, haem iron, which is found in red meat and mussels and is well absorbed by the body, and non-haem iron, which needs vitamin C or something called ''the meat factor'' to enable it to be absorbed well.

Of course, many of the fruits and vegetables contain their own vitamin C among their many other nutrients.

We get most of the iron in our diet from non-haem iron, according to Bob Stewart, of Massey University, who has recently completed his PhD in how iron is absorbed in the body.

Vitamin C also enhances non-haem iron absorption - drinking orange juice or eating fresh fruit with your oats for breakfast is a great way to get iron into your diet as oats have a lot of iron, he said.

However, vitamin C in food is unstable and easily broken down by heat so cooking food containing it can destroy much of its benefit as an iron-absorption enhancer.

Just as there are substances like vitamin C and the ''meat factor'' that enhance the absorption of iron, there are also inhibitors that can compete with the enhancers.

It's like the angel and the devil on your shoulder, Dr Stewart said.

Calcium in milk, and tannins in tea, coffee, cocoa and red wine can inhibit iron absorption so it's best to wait a couple hours before or after the meal before drinking these if you can.

''If, for example you drink red wine with red meat, the inhibitors in the wine will reduce the enhancing effect of the 'meat factor','' he explained.

Symptoms of iron deficiency include tiredness, weakness, feeling cold, irritability, frequent infection and an inability to concentrate, which are sometimes put down to a busy lifestyle or just ignored.

''It is hard to test these things in human trials. It's hard to test how well your brain is growing for example. In animal trials, especially the performance stuff, iron deficiency does seem to reduce the amount of activity of the animal,'' he said.

According to Assoc Prof Winsome Parnell, of the University of Otago, who is involved in the Adult Nutrition Survey, iron levels decreased in the New Zealand population between the surveys in 1997 and 2008-9.

There are three vulnerable groups she says. Menstruating women, depending on the amount of blood loss, need to watch their iron intake, and should have their iron levels routinely checked if they are vegetarian or vegan.

Toddlers also are vulnerable, once they have used up their iron supplies from breast milk and are being weaned on to solid food.

They find it difficult to chew meat, which is rich in iron and also has many other minerals and nutrients.

Many parents are too busy to soften meat so they can eat it.

Older people are also at risk, because, if they are not active they don't eat much and, unless they have good teeth, may not be able to chew meat, she said.

Also, according to Prof David Cameron Smith, from Auckland University, changes in the digestive and intestinal systems with age mean iron absorption becomes more difficult, leading to immunosuppression and loss of cognitive function in older people, even at levels that normally might not be considered iron-deficient.

''I think it's important to emphasise that iron is one of those important minerals and clearly a diet that is balanced provides the best array of minerals, including iron,'' he said.

We often forget about the importance of minerals in the diet with fashionable focus on vitamins, carbohydrates and fats. Minerals come from a rich array of foods, he said.

But before you go off and get an iron supplement, have your iron levels tested by your doctor as too much iron can be bad for you.

Iron is a double-edged sword, according to Bob Stewart.

''Most of the population have a normal gene that regulates iron homeostasis. That means if we eat too much iron we simply trap it in our small intestine and we get rid of it.

"But there's a very small subset of the population that can't do that very well, so if they take lots of iron pills they may end up with gastrointestinal problems or iron overload and diseases associated with that like haemochromatosis.

"It doesn't tend to happen too much but there is a higher risk of getting this by taking supplements rather than having a high-iron meal. It's best to have it as food,'' he said.

Avoiding tea, coffee, red wine and chocolate with main meals and having food rich in vitamin C, such as a salad or raw fruit or citrus juice with a main meal will help enhance iron absorption.

A few slices of meat in a dish like a stir fry will make the iron in the vegetables more available.

As always with nutrition advice, it all comes down to a well-balanced, varied diet, but being iron-savvy can help with iron levels. 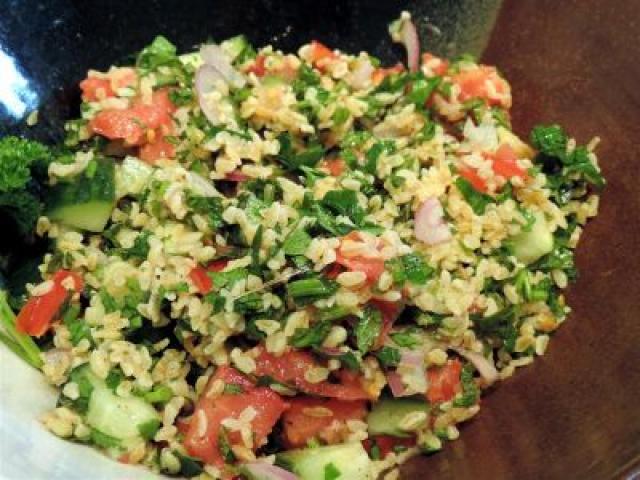 Tabbouleh is a Middle Eastern salad that is high in iron from the grain and the parsley, and has plenty of vitamin C to help absorb the iron. Bulgar (also called burgul) is cooked cracked wheat that just needs soaking to serve.

Soak the bulgar wheat for about 10 minutes until softened. Drain.

Stir in the tomatoes and lemon juice. The bulgar will soften further with the lemon and tomato juices.

Chop the parsley, stalks and all, and the mint leaves. Slice the onion finely and dice the cucumber and add to the salad. Drizzle over the oil and season to taste with salt and pepper and extra lemon juice if needed. Toss well. Leave for at least half an hour for the flavours to mellow.

If you don't eat it all, it will keep in the fridge overnight.

Half a teaspoon of ground allspice, cumin or baharat (a Middle Eastern spice mix) is a nice addition.

Soak the onion briefly in hot water if you prefer a milder onion flavour.

Add other chopped herbs and raw vegetables such as coriander, capsicum or finely chopped or grated carrot, or whatever you have.

For an extra iron boost add some pumpkin seeds.

You can make similar salads which are gluten-free by substituting another grain or legume such as a cup of cooked quinoa, chickpeas, lentils or beans for the bulgar.

For a special occasion, top with crimson pomegranate seeds. 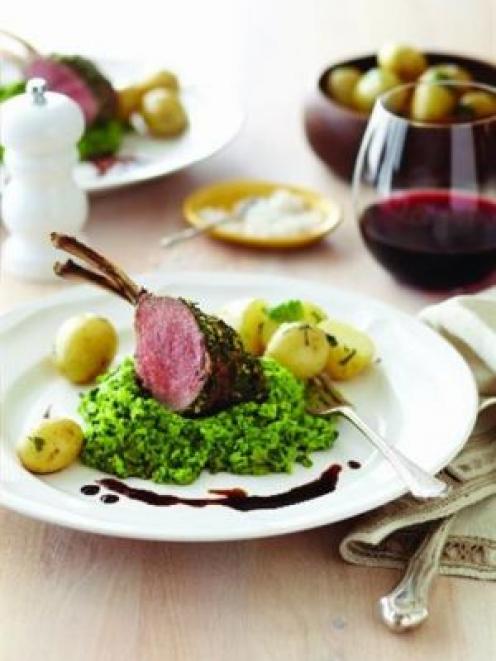 There's something a little bit special about serving lamb rack - it's such a great-looking cut, so tender and loaded with flavour. There's no need to feel daunted when you cook it. Just follow a few key steps (see the video at recipes.co.nz for a step-by-step guide) and it couldn't be easier. This meal is perfect for entertaining; it's simple to make, visually impressive and absolutely delicious. And because it's such a small cut, it cooks quickly so you won't be in the kitchen all afternoon preparing. Brilliant.

Trim any fat from the lamb rack and carefully remove the silverskin with a sharp knife. Season with salt and pepper. Heat 1 Tbsp of oil in a pan over a very high heat. Sear the lamb racks for a couple of minutes until browned all over. Remove from the pan and set aside to cool. Don't wash the pan.

In a small food processor or mortar and pestle (or chop everything finely), mix the oil, capers, garlic and fresh herbs to a chunky paste. Smear the mixture generously over the cooled lamb rack and leave for 30 minutes, or longer if you have time.

Add the wine to the hot pan in which the lamb was cooked and let it bubble up for 30 seconds. Add the stock and simmer gently until reduced to a light sauce or jus, about 5-10 minutes. Whisk in the butter. Set aside and keep warm. Preheat the oven to 210degC.

Cook peas in salted boiling water until tender. Drain and place in a food processor with the spinach, lemon zest and juice, parmesan and cream. Process until well combined but still a little chunky. Taste and season as required (You can use a potato masher instead of a food processor). Tip: make sure you do it when the peas are hot so they wilt the spinach.

Roast the lamb rack for 13-15 minutes, remove from the oven and rest for 10 minutes before slicing into 2-bone pieces. Spoon some pea puree on four plates, top with a 2-bone piece of lamb rack and drizzle jus over. Serve with minted new potatoes.