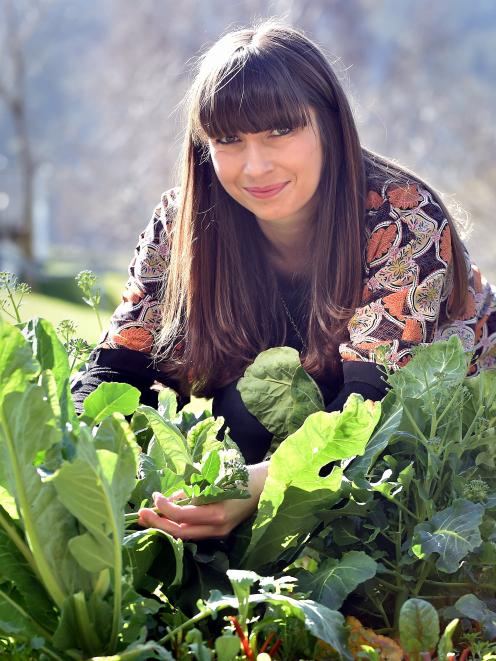 Chloe Humphreys in the vegetable garden at Otago Polytechnic. Photo by Peter McIntosh.
There's a plethora of diets around these days: wheat-free, vegan, dairy-free, raw, paleo, bone broth, among others. Many have origins in the weight-loss industry.

Some are fads while others have genuine benefits, but it's often hard to tell which is which.

Our ability to access information on the internet is one of the biggest influences on changing the ways we eat, explains Chloe Humphreys, a lecturer in the Food Design Institute at Otago Polytechnic.

However, with anything on the internet it is difficult to know who to trust, especially when they are selling products or there is money involved in some way.

Even officially sanctioned advice like the healthy food pyramid is influenced by big industry corporations, and nutrition advice about what is good and what is bad keeps changing, especially in relation to fats, sugars or carbohydrates, she says.

Eye-opening documentaries like Cowspiracy, Earthlings or That Sugar Film made us aware all was not well with the food industry, she said.

While some of the recently invented diets, such as paleo, are questionable from a nutritional point of view and may not be sustainable in the long run, one of the fastest growing food trends is veganism, which goes back more than 2000 years and can be healthy and balanced if followed carefully.

It uses no animal products and incorporates many factors including environment, health, animal welfare and social responsibility, she says.

A recent Telegraph article reported veganism had grown 350% in Britain in the past decade. Interestingly, the growth is largely among teenagers and the under-30s.

''In terms of environmental issues, they've got the most to gain from looking after the environment. It's a sense of social responsibility to actually preserve the world for future generations as well as from an environmental standpoint,'' Humphreys says.

Campaigns such as meat-free Mondays, World Vegan Day and Veganuary are becoming popular and many celebrities are going vegan for a short period of time.

''I think it's the idea that any change will help make a difference, so people are cottoning on to the fact that not everyone is going to be able to go vegan or vegetarian straight away. If those meat-eaters can have one day a week when they are not eating meat, it will help.''

Some of the new diets have been driven by the search for wellness, as Humphreys herself can attest.

Back in 2009, as a new high-school teacher suffering from stress and feeling sick with various digestive issues, she went to her doctor but, like many people in similar situations, found he could do little to help.

''The doctor could name my symptoms but it was treating the symptoms rather than understanding the cause. He did all the tests to see it wasn't cancer or something really nasty that was causing my illness, but there wasn't really an understanding, apart from saying you are suffering from stress and these symptoms are a result of that stress,'' she said.

''I tried an elimination diet to see if it was food that was affecting the way I was feeling. At one stage I was eating pretty much just meat and vegetables, I was that limited. Then once I started to feel better, I slowly reintroduced other foods back into my diet.

''I got to a point where nothing was really helping until I cut out all sugars, so I got into the area of looking at the balance of gut bacteria and how that's affected by what we eat.''

But a change of environment and dealing with the stress were also important, she said.

A growing number of bloggers have documented similar experiences, such as Eleanor Ozich (petite-kitchen.com), Ella Woodward from (deliciouslyella.com) or Emma Galloway (mydarlinglemonthyme.com).

They shared their stories of searching for wellness through food and helped develop a growing awareness that there were degrees of intolerance to certain foods, such as gluten or dairy, she said.

''However, what worked for them may not work for us and many of them are now selling products. There is always money tied up in any kind of message to do with health,'' she cautions.

Many diets are aspirational - we aspire to be the kinds of people they are; wealthy, slim, beautiful - but quite often it is not realistic, she says.

''People cling to diets because it feels good to take control of our food decisions and our health. There's a sense of belonging as well. Each of these individual diets or ways of eating has a real community around it, largely an online community so if people are deciding to eat in this particular way, they are connecting with a whole lot of other people who have the same kinds of values and beliefs as well.''

But her note of caution comes through again:

''You can't really trust anyone, and I think that's why there's this big rise in whole foods especially,'' she said.

''The trend now is towards everything as natural as possible, which seems like a really sensible thing, so if we can take anything from all of these food fads, probably the No1 thing is if you can get hold of whole foods that have had as little done to them as possible, you are trusting Mother Nature and not really trusting everyone else.''