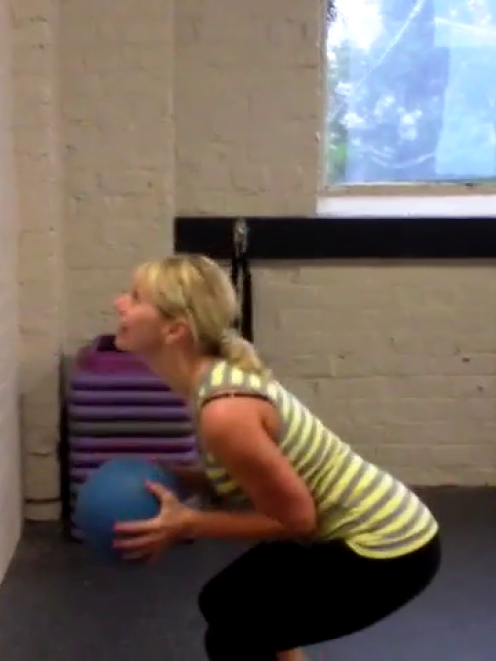 Only 3 TribeFIT workouts left.
Week 5 Day 15: Wow! I've only got 3 more TribeFIT sessions to go after today and I'm a little sad (unthinkable I know). At the start I saw  it as a bit of fun but after the first session I was just trying to see if I could survive 6 whole weeks of this and I'd be super proud of myself if I made it - but now with only a handful of sessions left I'm starting to think "what the hell am I going to do now?"

So many people said this would happen.

I've also been real slack with my eating (even more so than usual) which is a shame because I'm noticing decent results with my arms and waist getting smaller and legs toning up!

Getting out of bed is still not easy, I have to drag myself away from my bed along with having a quick debating session over how easy it would be just to sleep in...just this one time...who's going to notice? But I know that I can't so I don't know why I even bother with the internal argument.

So I'm up, no time for breakfast.

I'm a bit of a madman on the road and I get mega antsy when the lights won't change from red to green! My friend whose dad is a cab driver gave me a heads up and said just pull right up and over the lines a little so the lights change automatically. Apparently all cabbies do this! It seemed to be working until today, rrraaaaa!

Regular warm up and I came in second to Julia with the run, lunges and toy soldiers, I'm feeling good!

Wow that workout hurt, I was dying inside while going through the weight resistance part but I managed to work through it thanks to a little bit of sneaky cheating on my squats (I hope Alannah doesn't read this!)

(Below: I'm getting some much needed help)

The mountain climbers sucked big time today because I still had sore thighs from Wednesday's 100 mountain climbs so there were a few forbidden words being said from my end.

The running was a tad disheartening also, as I felt like my fitness levels were up really high but I kept needing to stop! What the hell is going here?!

It seems like you make a little progress and bath in it for a second then you're caught off guard again.

I experienced those same old strong negative mental battles while trying to hang in there today.

Next come's my favourite to loathe animal antics which is even harder to do when you have to do it beside the ever so buff and spunky looking boxing class.

Not only am I dying of exhaustion but I'm dying of embarrassment as I struggle to get the bloody alligator crawl perfected with my big old bum in the air! Not a good look.

I am determined to get that sucker down pat before the season is done and looking graceful like the other tribesmen!

See you for the final week next week and the final fitness test!

- Dunedin hairdresser Emma Rastrick has bravely decided to take on World Fitness Centre's TribeFIT training programme with the aim of getting in shape in just six weeks.