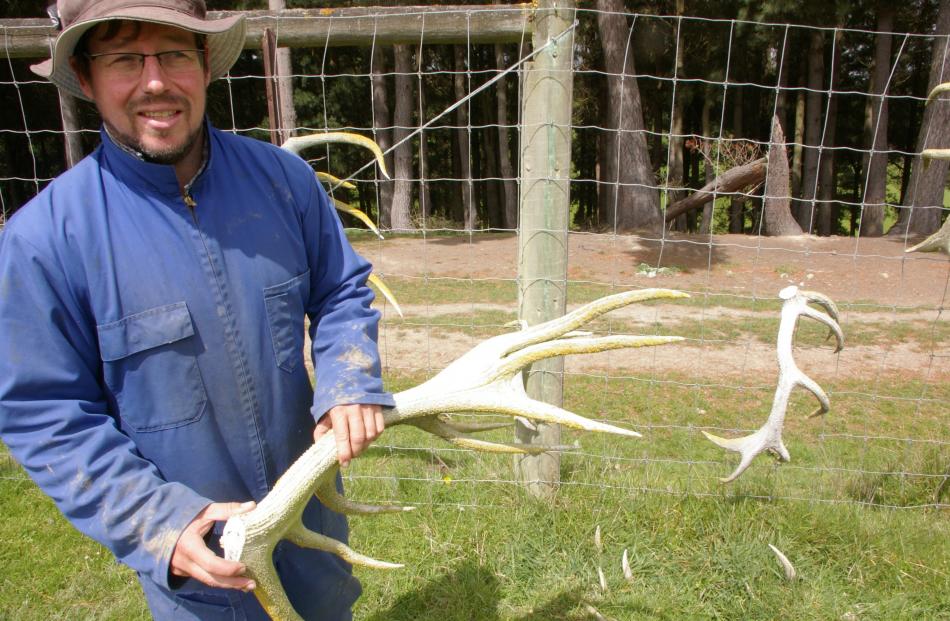 Former Radio New Zealand economics correspondent Nigel Stirling has deer velvet and sheep on his mind these days. He left international assignments and Wellington behind for South Otago and the family business 18 months ago. Photo by Hamish MacLean

Gumboots are more part of Nigel Stirling's wardrobe than suits these days but the former journalist has not gone "cold turkey'' on his news
background, despite the demands of farming life. He tells Hamish McLean about his return to the family farm in South Otago.

One would forgive former colleagues for doing a double take, but Nigel Stirling has no trouble recalling how he was introduced to audiences in his four years at Radio New Zealand.

''They'd read out an intro that I'd written and then they'd say, `Economics correspondent Nigel Stirling has been covering the story - and he joins us now.' ''And I'd say, 'Good morning, Jeff' or `Good morning, Sean' or I'd just launch straight into it.

''They'd finish it by saying, `Thanks, Nigel.

''That was our economics correspondent Nigel Stirling.''

It all stopped 18 months ago, when Mr Stirling left Wellington, trading a day-to-day existence of wearing suits and city living for South Otago, putting on his gumboots and breathing the fresh air of home.

He returned to the family business.

These days Mr Stirling is on the family farm, tending to sheep, or British red deer.

There is no rote salutation from the deer, he says.

But he enjoys being around them just fine.

''They are regal looking animals, I think. There's a certain elegance in them that you don't get with sheep,'' he says.

To some he knew in Wellington the move south - the change in careers - would have come as a surprise, he says, but it was always a part of the plan.

Mr Stirling (38) is the only child of Terrence and Margaret Stirling, who have lived at Lovells Flat since 1974.

He owns Fourth Estate Farms with his partner, another former Radio New Zealand staffer, Rachel Askew. They have bought all the sheep off his father and he is learning about the velvet industry and the trophy heads his father produces, while taking an interest in the commercial properties in Christchurch the Stirlings have bought over the years, which all form a part of the family business.

His uncle John Stirling was, for about 25 years, the farming editor of the Otago Daily Times.

Mr Stirling calls him a role model of sorts. After university where he studied economics, Mr Stirling started writing for the university paper in Dunedin and, in 1999, landed a front-page story in the ODT, a feat, he says, that stamped his ticket for journalism school.

He was off to Wellington for training. And his career went well as a writer. He was the first editor of New Zealand Farmers Weekly when he was 26. His work as a journalist took him overseas.

During his career he worked in the UK and Ireland for a commercial property magazine called Estates Gazette, first in London for a year and then in Dublin for about another year.

He worked in Newcastle upon Tyne in the north of England as a business reporter for a daily newspaper there.

''I did a lot of stories about commercial properties, as well, so all the while, while I was doing the journalism thing, I was kind of thinking about what I was going to do when I came back home.''

In 2008, he returned to New Zealand to work for Radio New Zealand covering economics stories when the financial crisis hit.

But the family business was waiting for him. He says he knew his father, now 71, had a lot to teach him.

''I kind of strung it out for as long as I could, really. It came to the point where I had to make a decision.

''Keep on down the journalism route and the farms would get sold and there would be nothing for me to come back to, or come back on to the farm, while dad was still fit and wanted to show me how to do the work - how to run the farm - I couldn't leave it too long.''

These days he spends most days in the field with his father. They run 1500 ewes, 600 hinds and about 100 velveting stags.

The younger Mr Stirling says ''Dad'' still calls the shots on the farm. His father's passion for the deer interests him, he says.

''He's had deer since the late '70s. That was about the time that it kicked off for New Zealand.''

Providing deer for game parks is a relatively new endeavour for deer farms, he says.

''We probably hold on to the stags a little bit longer, until they're 8, 9 years of age and then we sell them for trophies.

''There are these parks, a lot in Canterbury, where tourists, mainly, pay money to come and shoot a stag with a good head.''

The Stirlings are trying to get good bloodlines for trophy heads. ''Rather than putting these stags through the freezing works when their time comes, you get sort of $300, $400 for them, you can get a minimum of $2000, or $3000, for them.

The Asian markets for velvet and the European or American market for venison are narrow and they are volatile. That's why Mr Stirling still puts a suit on on occasion and takes on the commercial property side of the family business.

''It's Dad's business. I just help,'' he says. He's aware of the learning curve, eager for the challenge, ''because it's just me that's going to be doing this in two or three years' time''. But he has not kicked the writing habit entirely. Mr Stirling is freelancing, writing trade stories for the newspaper he admits a sentimental attachment to, New Zealand Farmers Weekly, which he helped to set up.

''I haven't got the DTs on the whole journalism thing. I'm still feeding the habit.''