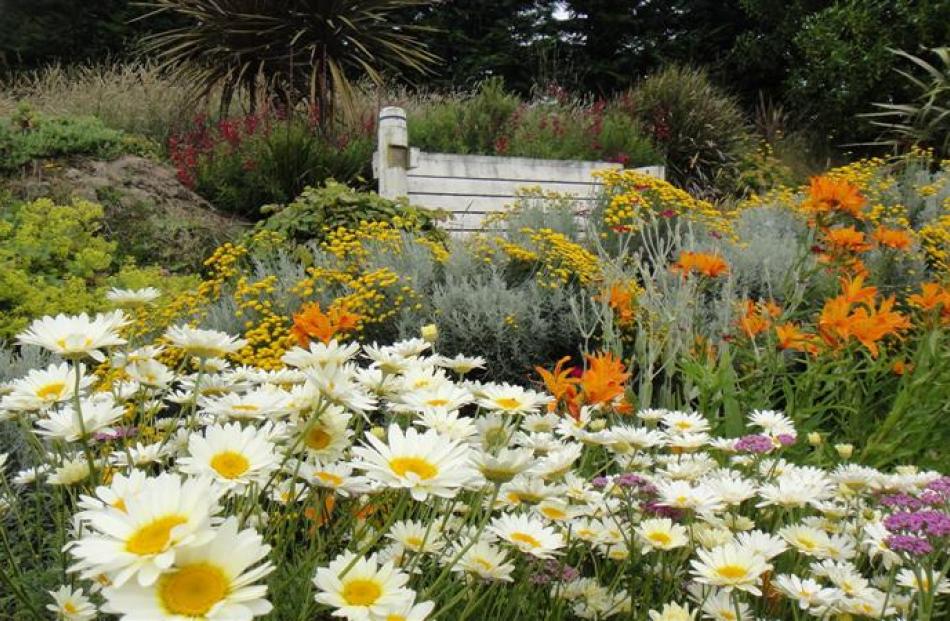 An old seat, recovered from the St Clair Esplanade upgrade, sits behind a border of anthemus daisies and Peruvian lilies on Gail Oats' and Ian Marechal's coastal property, SeasonSkys. 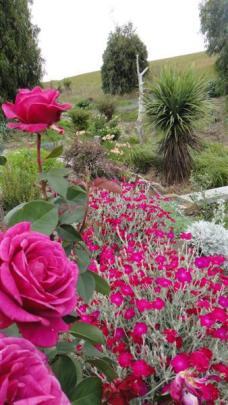 Blackberry Nip rose and rose campion combine for a splash of colour in the 'rosealea garden'. 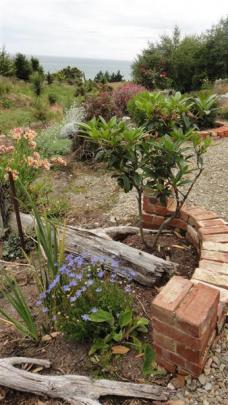 An old brick pile from Richmond St now props up the 'rosealea' garden. 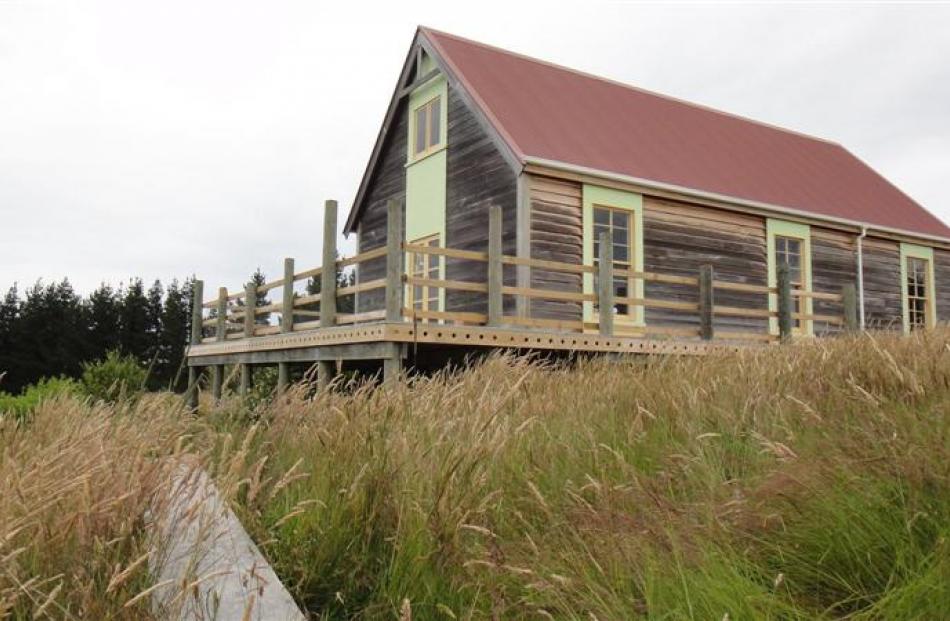 Ian's ''shed'' recreates a little of New Zealand's rural past. 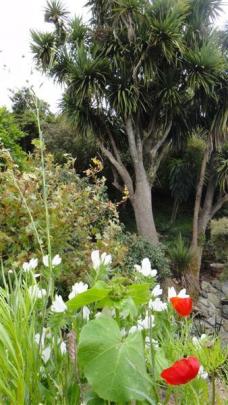 The cabbage tree rescued from the predations of old man's beard forms the centrepiece of an oriental-themed rock garden. 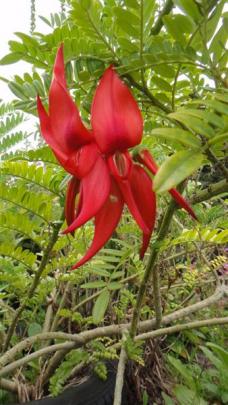 Kaka beak has been planted as part of a conservation effort - the plant is now almost extinct in the wild - and is self-seeding in the sheltered spot. 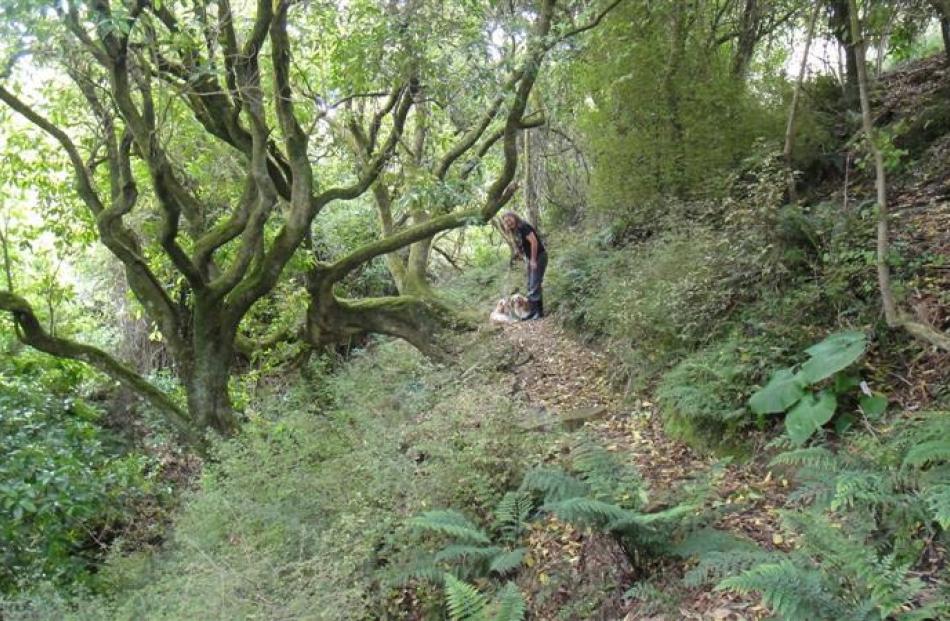 Gail, with dogs Percy and Joshua, in the rescued bush gully. 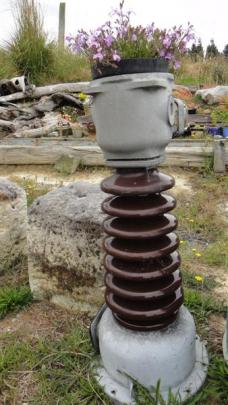 A garden by the sea is restoring a little of New Zealand as it used to be, in more ways than one, writes Tom McKinlay.

As much as anything achieved so far on their 8.5 hectares above Taieri Beach, the life-giving light is evidence of the transformation begun.

Back when the pair moved on to the then gorse-infested section that runs from Akatore Rd down to a secluded beach, the gully presented as an undifferentiated tangle of old man's beard.

Almost incredibly, a huge old cabbage tree that now rises regally from the bush remnant was then submerged, unseen.

Gail chuckles as she recalls her efforts over several years to fight her way through the choking vine, discovering treasure after treasure in the murk: native fuchsia, ngaio, tall pittosporum trees, manuka and kanuka.

There is now a track running the length of the gully, which is being planted out in hostas, lilies, polyanthus, flowering fuchsia and hydrangeas, among a mix of other natives and exotics, as an understorey to complement the bush.

''After three or four years the vine breaks down really quickly and makes this beautiful floor mulch,'' says Ian, lifting a handful of the rich brown humus, proof that all that felled vine has not died for naught.

But the reclamation of the gully - and the return of native birdlife it has brought - is just one part of the conservation-minded makeover Gail and Ian have undertaken in the past 10 years.

''We wanted to get a traditional Kiwi New Zealand rural look happening and we also wanted to improve the quality of the habitat for native birds, insects, bees and butterflies and moths,'' Gail says.

''The other thing I wanted to do here by the coast is to show you can have a coastal garden that's lush and leafy and colourful.''

To that end, several distinct gardens are growing and spreading across what were once rough paddocks, creating oases in the surrounding farmland.

But before we get to that, there's the story of the house, a classic Kiwi villa that once sat in South Dunedin's Richmond St.

Gail had been looking for the right property, with the right house, for about three years when she came across the Taieri Beach section. It was perfect, except there was no house. Specifically, there was no old farmhouse. So they decided they would bring the one they were living in. Ian cut it in two, hinged and collapsed the roof for the shift and off they went - also taking the house piles and a pile of bluestone that supported the chimney in Richmond St. The latter is now used to good effect in the garden.

The house, now back in one piece and painted in a bright palette for its seaside habitat, looks for all the world as if it has been there forever.

Not that Gail is recommending the approach.

''If you are going to move a house, don't move one you are in love with,'' she says a little ruefully.

The second major structure on the property is the deceptively-christened ''shed''. It is, in fact, a large wooden building, constructed by Ian, and sometimes mistaken for an old school hall. It was designed to fit in with the nostalgic Kiwi idyll of the place, and incorporates native timbers, beams from the old St Kilda borough town hall and sash windows from a decommissioned Corstorphine church building.

''If you are lucky enough to live in a beautiful place with outstanding natural beauty you should be trying to enhance that and add something to it,'' Gail says of their decision to steer clear of utilitarian tin.

Along with the house, they also brought their South Dunedin cottage garden. It needed to go in sooner rather than later, somewhere it would survive.

A mound of dead gorse cuttings was planted with a climbing rose, and the Richmond St garden went in around it. The transplanted cottage garden now sits just above the native bush gully, out of the way of the worst of the northeasterly, flowering in hues ranging through the spectrum.

To provide some structure around the property's several garden plots, ''hundreds and hundreds and hundreds'' of trees have now been planted: cabbage trees, pittosporum and ngaio, pohutukawa. These are complemented by exotics, many of which were chosen for their colour; among them maples and conifers. Then there are the 600-700 flaxes.

''I wanted to garden but not quite on that scale,'' she says.

Gail and Ian's approach to combining colour and structure is illustrated along a long bank separating the drive from their bog garden, where a line of silver birches is planted for autumn colour, in front of a row of contrasting evergreen blue ice conifers.

While determined not to let their location limit their plant choices, neither have they turned their backs on coastal classics.

On the leeward side of the house against a clay bank, Ian has created an ''underwater garden'' featuring seaside staple the ice plant alongside a playful mix of other succulents, set among pieces of driftwood, rocks and beachcombed flotsam.

That big cabbage tree saved from the vine is now the centrepiece of an oriental-themed rock garden, inspired by a cotoneaster twisted by the weight and cloak of the old man's beard to resemble an oversized bonsai.

Other themed areas include a ''rosealea'' garden, featuring roses and azaleas and those brick piles from under the house in Richmond St.

The generosity of other gardeners in sharing clippings has been key, Ian says, when taking on such extensive cultivation.

The environment has proved tough and they've learned lessons as they have gone along, he says, helped by the fact they had no electricity for the first 12 months. They and their plants acclimatised together.

''As time goes on you get in tune with your environment,'' he says.

''And you start to understand the nature of the environment, the climate, the rain.''

Shelter belts went in early as a necessity, but will in time become topiary features in their own right.

The vision is taking shape, a little bit of a New Zealand that once was. Indeed, there's another twist in that tale. For after buying the property, Gail realised that it was once part of the farm owned by her great uncle and aunt, Bill and Edie Stuart.