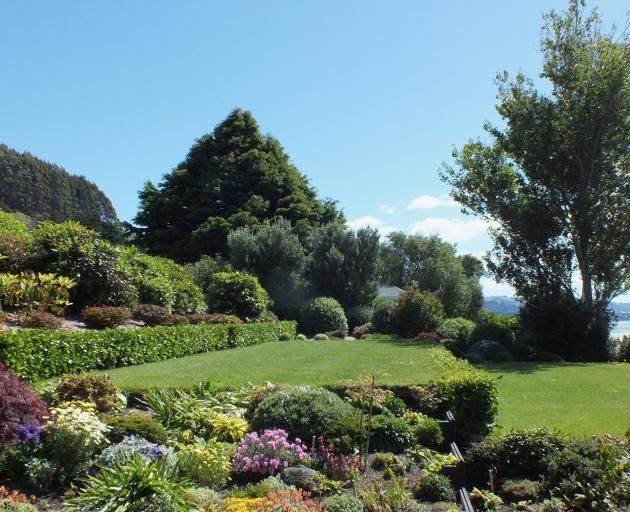 Lawns were created on two levels so they would be flat. PHOTOS: GILLIAN VINE
Gillian Vine visits a Dunedin property where a Japanese courtyard garden is among the attractions.

When their architect presented his initial design for their Ravensbourne house, Ian and Rosalind Gibson gave it the thumbs down.

"No, no; that’s where the Japanese garden is to go," Ian said, pointing to the garage in the centre rear. 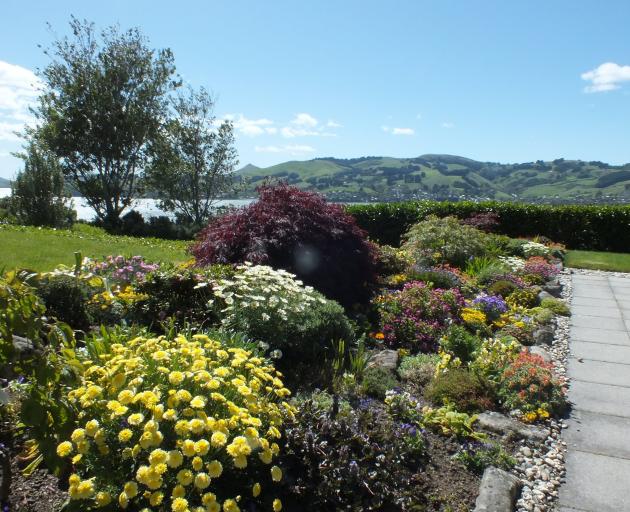 Rosalind Gibson’s packed rockery has great impact from the house.
The plans were changed to a U shape to accommodate the courtyard, based on a Kyoto design with a pond, subdued flower tones, white azaleas, a flowering cherry (Prunus autumnalis) and lots of green accents.

"It’s all quite modest," Ian says.

He is a former geologist, while his wife, Rosalind, is a research professor in the University of Otago’s department of human nutrition. With input from Ian, she is working on a revised edition of her acclaimed book, Principles of Nutritional Assessment. Both have an ongoing interest in the issues surrounding children’s nutrition, especially in Indonesia and Africa, where they have worked. 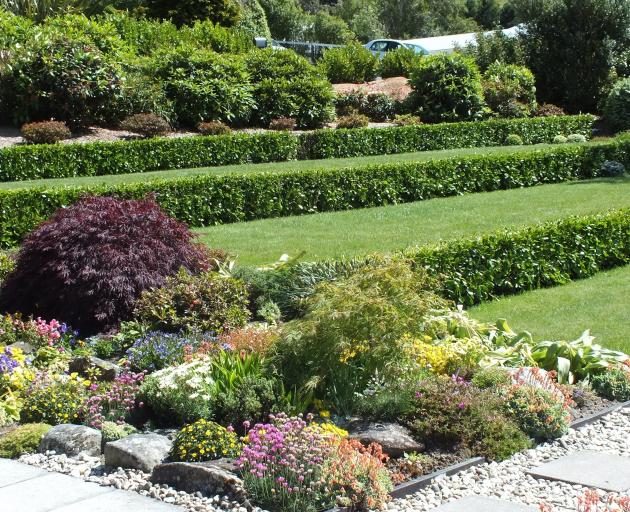 Hedges are native broadleaf (Griselinia littoralis).
"We gardened a bit in Canada and had a small garden in the UK. Canada is a wretched place to garden [with growth] only five months of the year."

Dunedin has a much kinder climate but there are still challenges for the Gibsons.

Their section is very exposed, copping northerly and southerly winds. 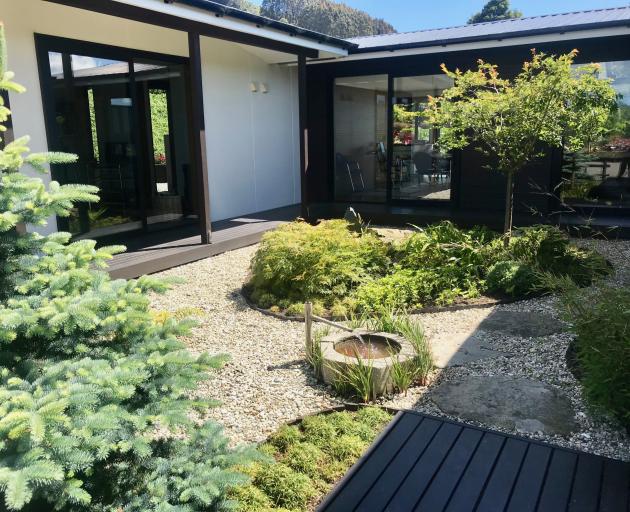 The house was designed around a Japanese-style courtyard garden.
The garden was designed by Ian to have maximum impact from the house and "vaguely laid out" before they moved in about seven years ago.

The first area to be developed was the patio with Rosalind’s rockery, now filled with a mix of plants that provide colour virtually all year round.

The stepped arrangement above it came later, reflecting Ian’s conviction that to look best, lawns must be flat.

He admits that he found growing a lawn quite difficult and had to learn what was best for feeding it as well as the optimum length to have the grass. 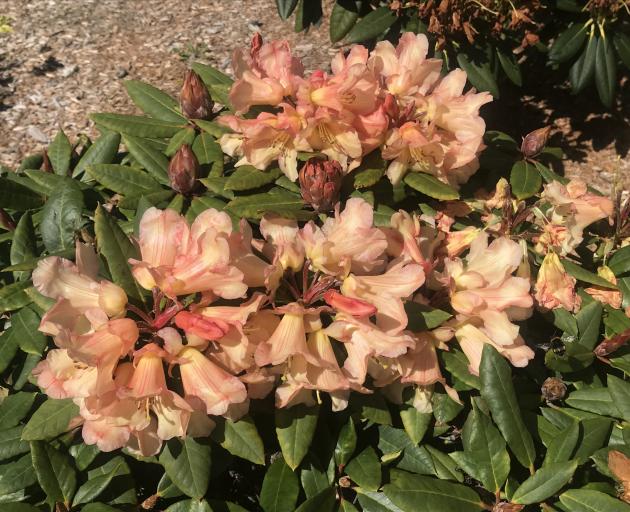 Numerous rhododendrons give colour from late winter until December.
The hedges above each flat grassed area are native broadleaf (Griselinia littoralis).

"We saw a Griselinia hedge picture in a magazine and said, ‘We must have it’."

It is clipped monthly during the growing season to maintain its neatness.

Unfortunately, broadleaf has some problems, being subject to bugs, including scale, that will kill it. As the bushes won’t regrow from the bottom if cut down, replacement is the only solution. 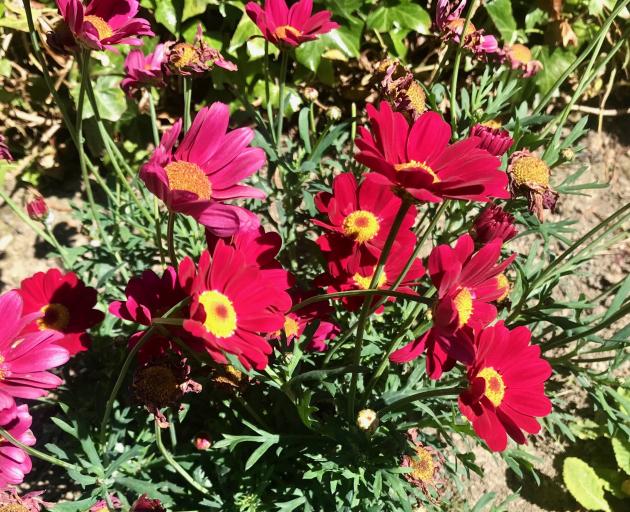 Above the daisies, a clay bank stays green throughout the year. That is because ivy has been used as a groundcover, dotted with camellias that link to a shrubbery with more camellias, as well as numerous rhododendrons and azaleas that light the garden from late winter. 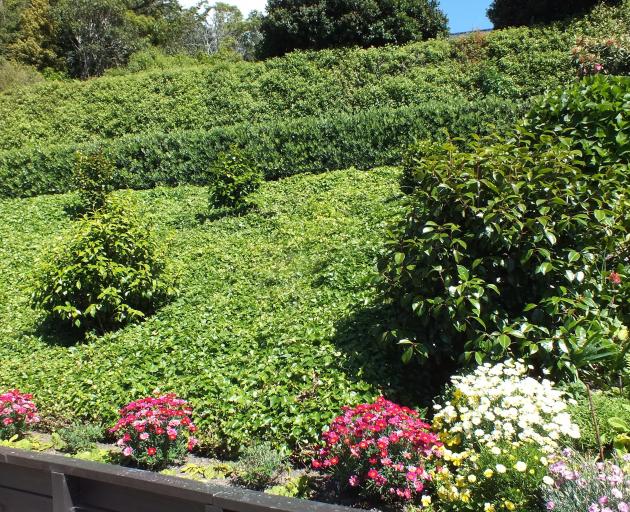 On an awkward bank behind the house, camellias are surrounded by a groundcover of ivy.
The Gibsons do most of the work themselves, although Rosalind emphasises the help they get from professional gardener Tracey Frisby.

Sunny, with great views of Otago Harbour, the property does lose the sun quite early for two months in the winter. Large windows keep the house warm. There is enough sunshine to please the wide range of plants and Ian says: "It’s a misconception that Ravensbourne is very shady."