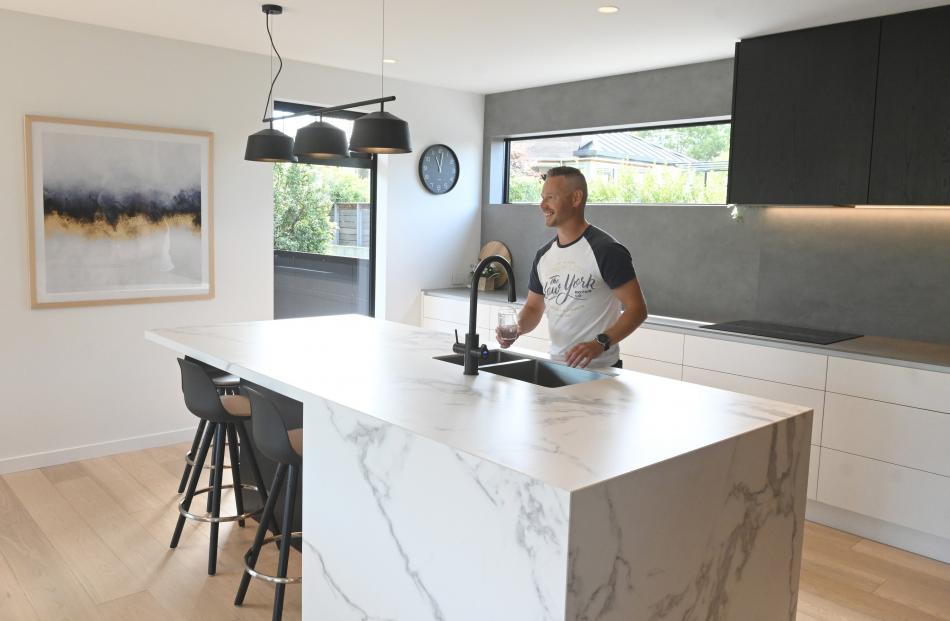 Robbie Checketts pours himself a drink in the Maori Hill home he and wife Claire Hunter built. The porcelain island bench was chosen for its scratch- and stain-resistant properties. 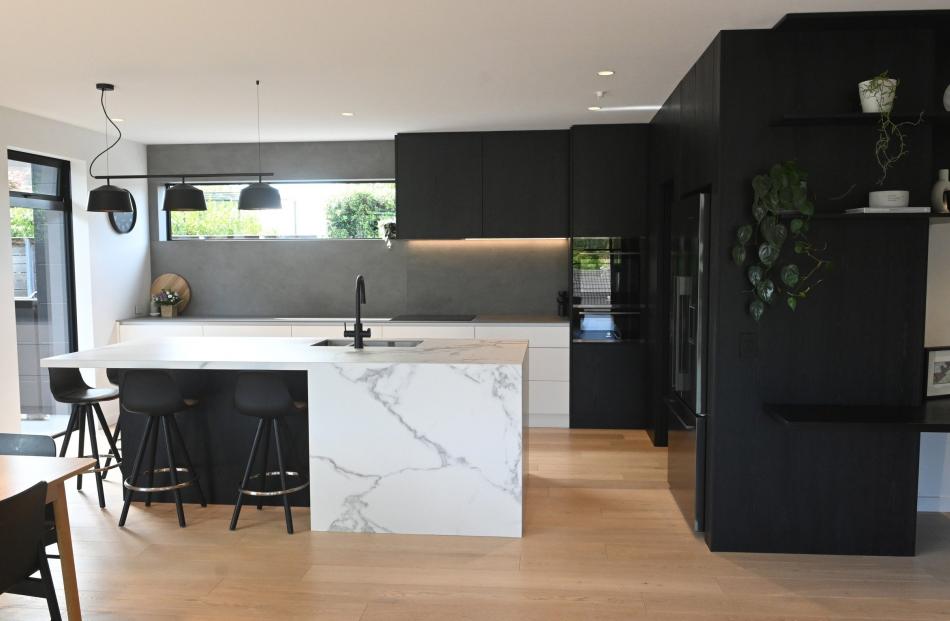 A porcelain splashback wraps around a high window which floods the kitchen with morning light. 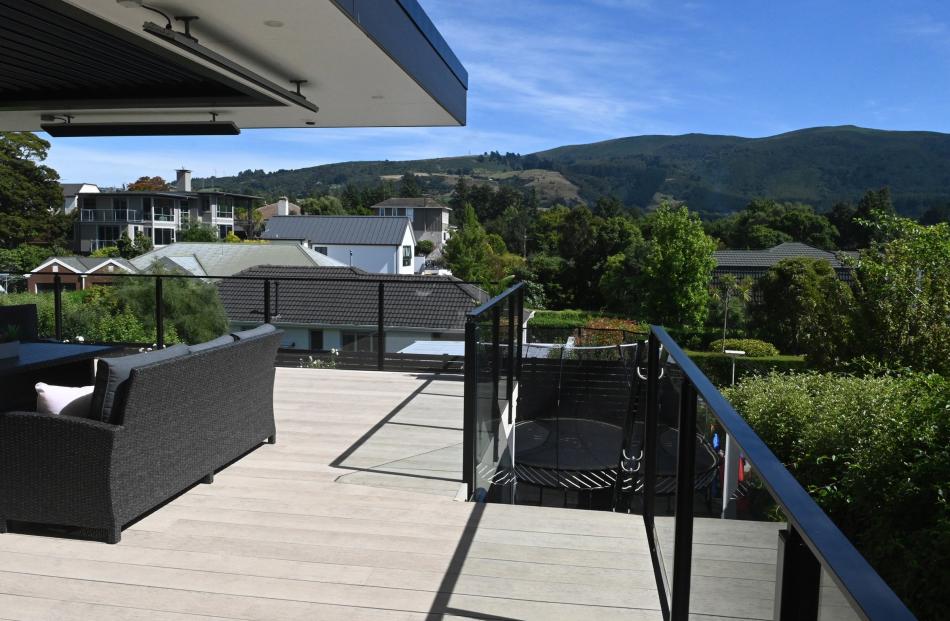 The low-maintenance decking was made in the UK from polyurethane resin. The rubberised membrane allows fixings to be concealed. PHOTOS: LINDA ROBERTSON 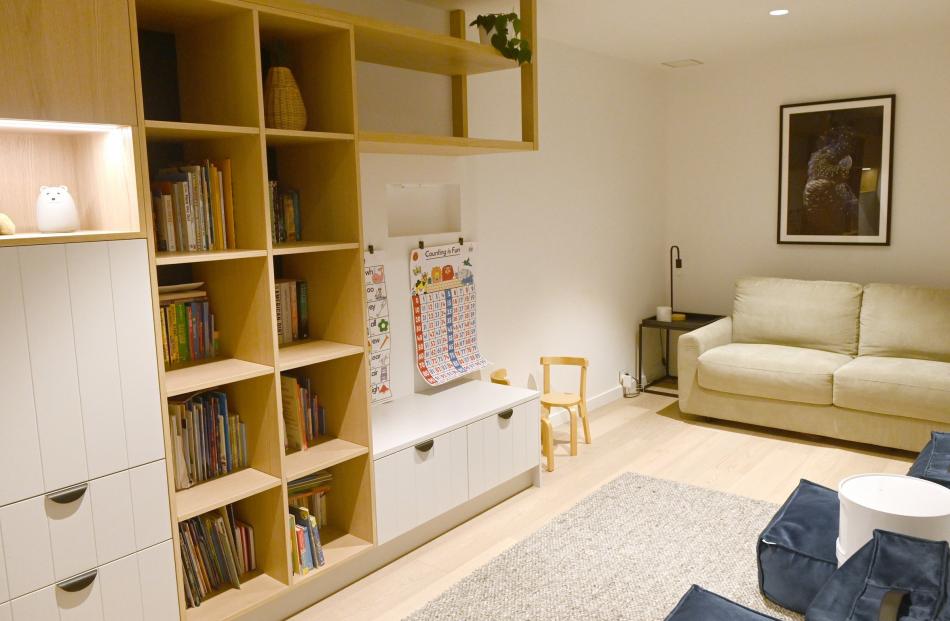 Built-in book shelves feature in the playroom, which also has a sofa bed so it can serve as a fifth bedroom. 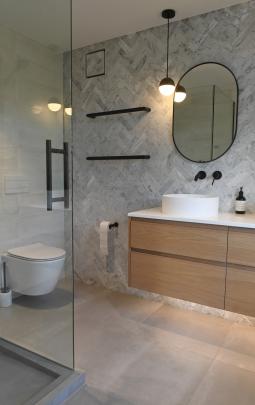 The neutral colours continue in the bathrooms. 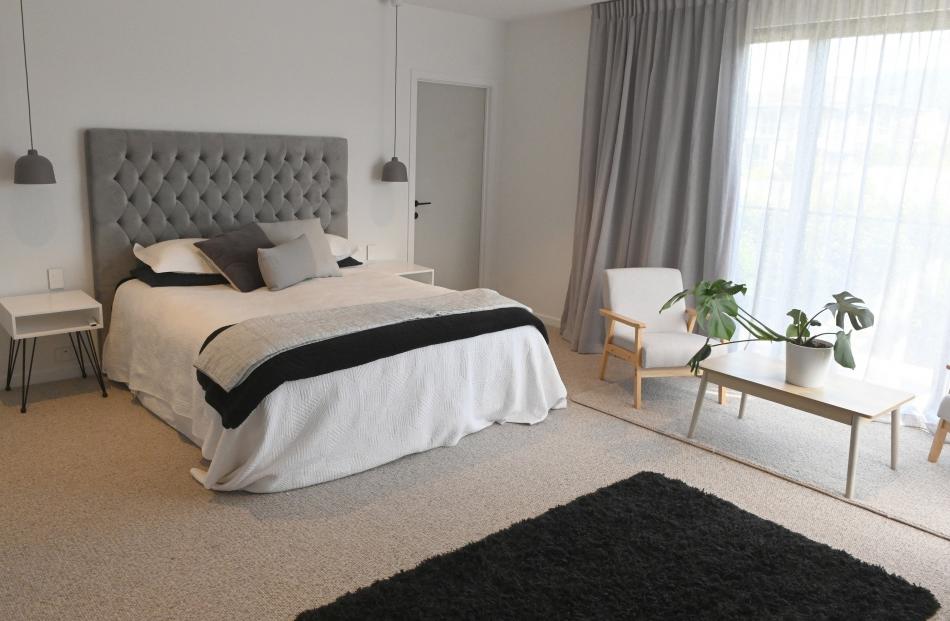 The bedroom on the upper floor has a kitchenette and en suite. 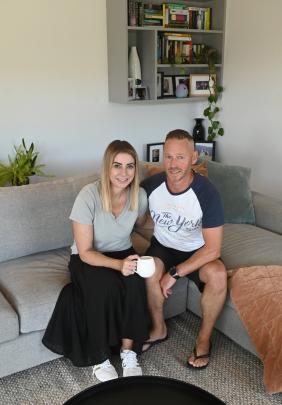 Claire Hunter and Robbie Checketts say their new home is warm, sunny and ‘‘very easy’’ to live in. 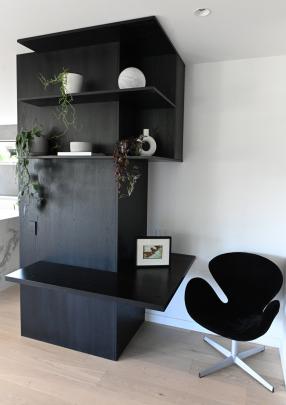 The study nook next to the kitchen means work, homework and cooking can all take place in the same area.

This self-build resulted in a home that perfectly suits the owners’ lifestyle. Kim Dungey reports.

A young Dunedin family worked day and night to build their dream home.

"It took a lot of blood, sweat, tears and energy drinks to build the house," says self-employed builder Robbie Checketts, with a laugh. "It was an interesting year and a-half."

He and wife Claire Hunter used a kitset house they had built on the fringes of St Clair as a stepping stone to buying their Maori Hill plot. A developer had demolished a house on the site and created two leg-in sections.

Concept plans had also been drawn up, but the couple engaged architectural designer Reece Warnock.

"The brief was to design a modern family home that provided good outdoor living, took advantage of the northern aspect and provided privacy ... a pared-back home that was bathed in light and didn’t compete with its spectacular bush outlook," Warnock says.

Dark cladding contrasts with cedar on the exterior.
The upper level consists of the entry, the living spaces and an apartment designed with the couple’s Central Otago-based parents in mind. The downstairs contains three more bedrooms, a breakout space and a play room.

"Service spaces and walls with minimal windows back onto the neighbouring elevated sites, creating privacy for the living areas," Warnock says.

"A cantilevered roof provides covered outdoor living, and stairs off the deck lead down to the lower-level garden."

While Mr Checketts had some help with the heavy lifting, he essentially built the 334sq m house on his own — returning to the site each night after dinner and rarely getting home before 10pm.

"Claire was working full-time and I was full-time here," he says. "Ensuring we had work-life balance and keeping the kids happy was essential."

Ms Hunter, a resource management consultant, jokes that at times she wondered if he would be happy for them to even touch things after they moved in.

"The standard doesn’t change [when you’re building for yourself] but you probably get a bit more precious," he concedes. "We did it with young kids, which made it difficult, but we did it for them so you have to enjoy the house." 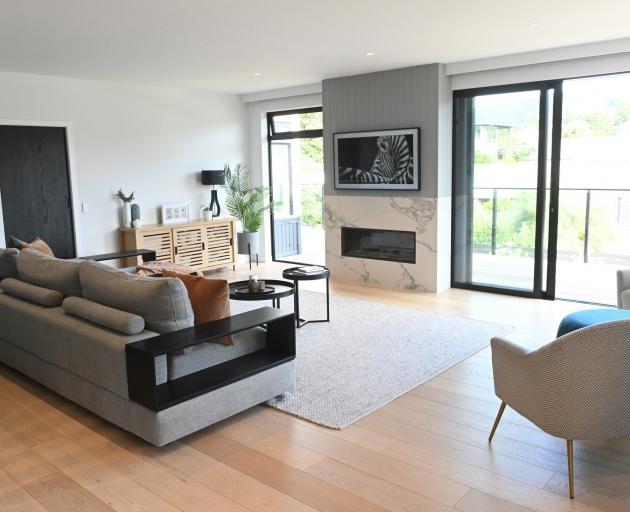 The fire surround is wrapped in the same porcelain as the kitchen bench; the art-style TV means the room is not dominated by a black screen.
With a drop of more than 4m between the top and the bottom of the site, the earthworks was the most challenging part of the build.

To shore up the shared driveway while they were excavating, they had to build a retaining wall that is now hidden underground.

Soil that was removed to make way for the basement was used to level the back lawn, enabling Emilia (8) and Luca (3) to run straight out from their bedrooms to the trampoline and sandpit. They have even been known to ride their bikes in and out of the ground-floor rumpus room.

Clad in cedar, cement board and plaster, the home also has aluminium composite panels as a feature on the entry canopy.

Inside, engineered oak floors are complemented by a neutral colour palette and black accents.

The marble-look, porcelain kitchen island bench is big enough to eat at and the butler’s pantry is the "most utilised room in the house". Other favourite features include the spacious family bathroom, the big laundry, the kitchen tap which dispenses boiling and sparkling water, and the built-in joinery which includes a study nook, bookshelves and lots of storage.

Solid oak slats separate the living area from the entry and stairwell. PHOTOS: LINDA ROBERTSON
Glass doors on both levels create a seamless flow between the inside and the outside, while the roof over the deck has louvres.

Asked if they had advice for others planning on building, the couple recommended really thinking about how each space will function, talking to joinery experts about fit-outs, and considering the local climate and ongoing heating costs — in their case, water pipes running through the slab are powered by a heat pump.

Hiring interior designer Talia Taylor was also a "marriage saver", Ms Hunter jokes. "Our only regret was not involving her in the planning and design much earlier than we did."

Although their thoughts have now turned to an investment property they are planning in Central Otago, building their own home was a "cool experience", Mr Checketts says. "Knowing every intricate detail of the whole house and building it from the ground up for the family was amazing."