Lysimachia clethroides. Photo: Gregor Richardson.
Against the fence at Dunedin Botanic Garden’s water garden blooms a stand of flowers that gracefully arch like a flock of slightly surprised, but curious geese, all looking in the same direction.

Lysimachia clethroides, or gooseneck loosestrife, has upright stems clothed in bright green, pointed leaves. The stem terminates in a spike of densely packed snow-white flowers. Each individual flower has five petals arranged like a tiny saucer. Clustered together up the raceme, they open gradually from the bottom up, in mid to late summer.

Once flowering has finished and autumn approaches, the leaves take on warm orange-red tones. The plant then retreats underground for winter.

Gooseneck loosestrife is native to China and Japan, growing in moist soil in woodland margins and hillsides. In cultivation it prefers sun or part shade and a moist but well-drained soil where it will spread relatively quickly by underground stolons to form a decent-sized clump. In drier soils, it is less vigorous and can die down more quickly after flowering.

Reaching a height of up to about a metre, this Lysimachia makes a great cut flower and is an elegant plant for pond margins and herbaceous borders. 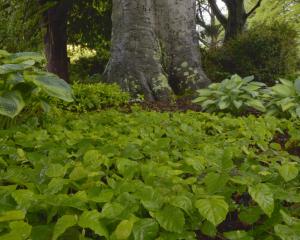