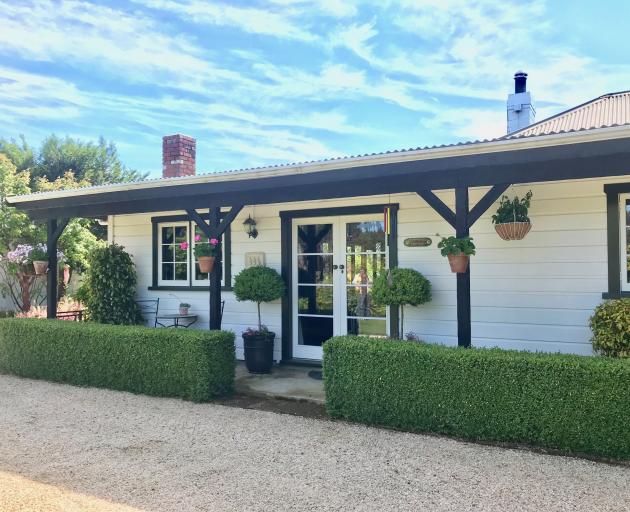 Craig Inch is slightly disconcerted to see groups wandering around his garden. True, Hawthorn Cottage, on the outskirts of Mosgiel, has been open before to the occasional garden club but this is the first time he and his wife, Jo, have taken part in the Dunedin Open Gardens scheme. 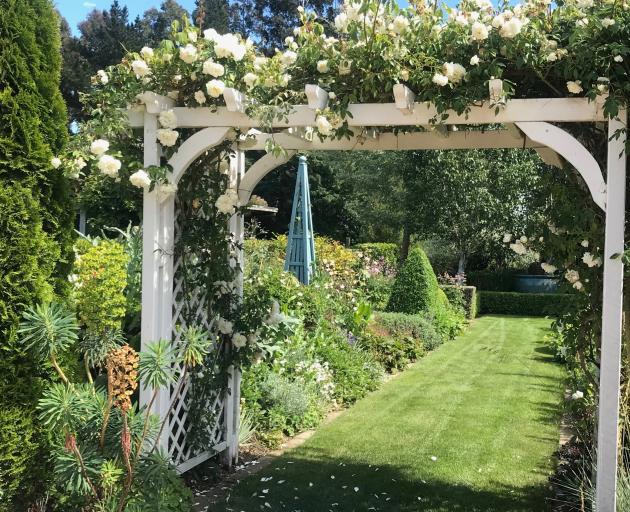 A rose-covered arch at Hawthorn Cottage.
"Making big changes is difficult if the garden is open," Craig says, eyeing a large flax that he wants to take out.

Eleven years ago, when the Inches bought a former railway cottage, it came with 2.4ha of flat land backing on to the railway line. Apart from the surrounding hedges that give Hawthorn Cottage its name, there was very little except a large oak — since removed — behind the house. 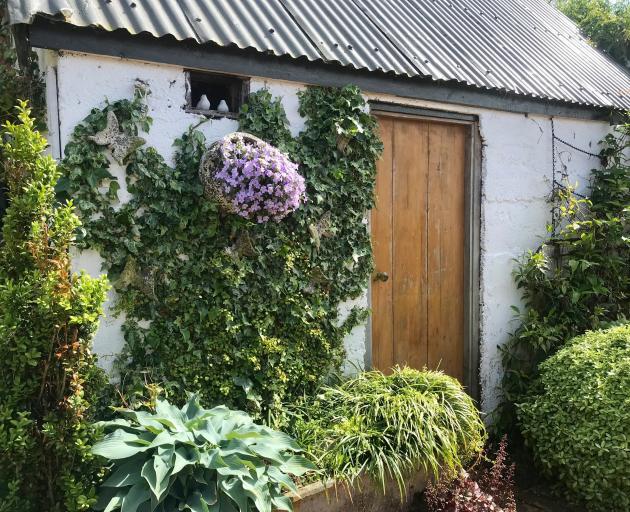 Built by the first owner, the shed is clothed with ivy, clematis and a potted Bacopa.
The original owner was a stonemason who Craig understands worked on the Taieri Gorge line and he was the builder of the washhouse and meat storage beside the cottage. These days, the building is used for more conventional storage, while the outside is clothed in ivy and clematis, with a potted blue-flowered Bacopa providing long-lasting colour.

Craig and Jo cleared the garden site and brought in trailer-loads of horse manure — "It would have been in the hundreds of loads," he says — to build up the soil, which was quite heavy.

"Luckily, we’re near stables," he says. 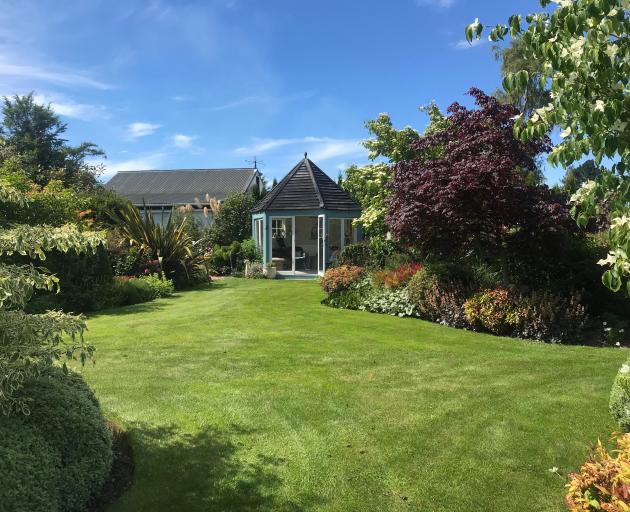 Jo and Craig Inch say their summerhouse is a great place to relax in the evenings.
Until joining Wayne Butson’s design and landscaping company two months ago, Craig’s was a familiar face at Nichol’s Dunedin garden centre. He worked there for 17 years, accumulating an encyclopaedic knowledge of plants and honing his propagating expertise.

Alongside a bent for design, those skills have been invaluable in the development of Hawthorn Cottage’s extensive gardens. 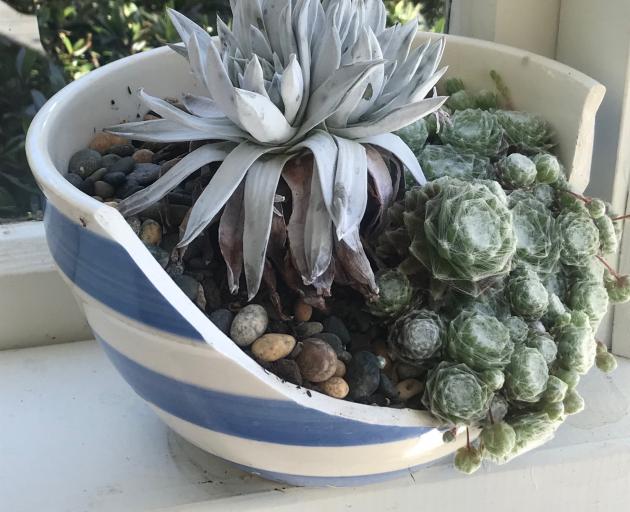 When a favourite bowl broke, it became a succulent planter.
"It’s so difficult to source plants now [but] I’ve picked up things from all over the place, friends and so on," he says.

He has propagated lots of plants, "something I very much enjoy", including most of the hornbeams used for hedging. Always looking around the garden for seed to save, he is waiting for a pondside Podophyllum to set seed. Unlike the more common Spotty Dotty, the Inches’ specimen has shiny lettuce-green leaves. 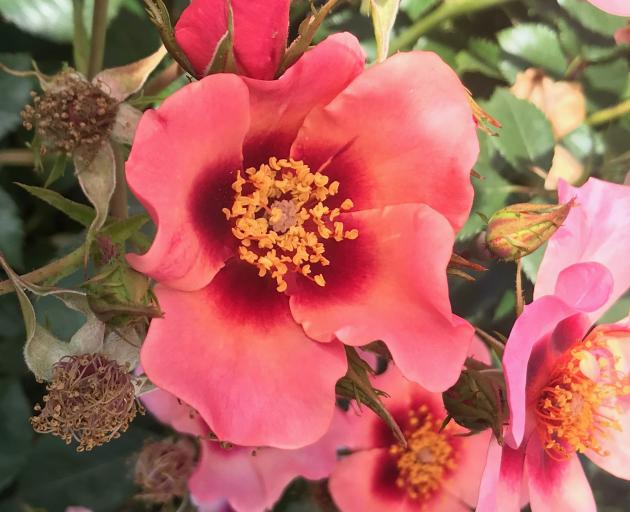 For Your Eyes Only is a David Austin rose.
The large pots around the garden were absolute bargains: "Almost all my pots are broken ones from Nichols and I’ve hidden the repairs, luckily."

Hedges of hornbeam, Corokia, Escallonia and Muehlenbeckia divide the garden into "rooms", with immaculate lawns around beds full of roses mixed with other shrubs and unusual perennials.

A large vegetable garden and orchard help feed the family and are a reminder of Craig’s background as the son of Outram market gardeners. 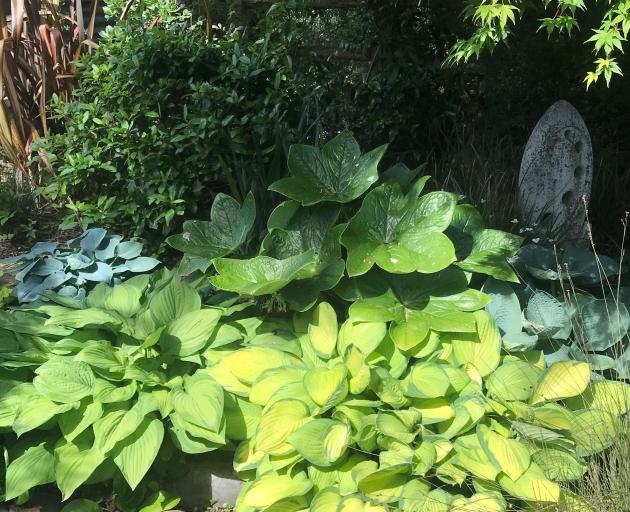 Hostas and (at rear) an unusual Podophyllum love their shady spot.
He has just added a new section of garden. Will he do more?

Hawthorn Cottage is part of the Dunedin Open Gardens scheme. Visits are by appointment and groups can be accommodated. For details or to book, email jo.inch@xtra.co.nz.