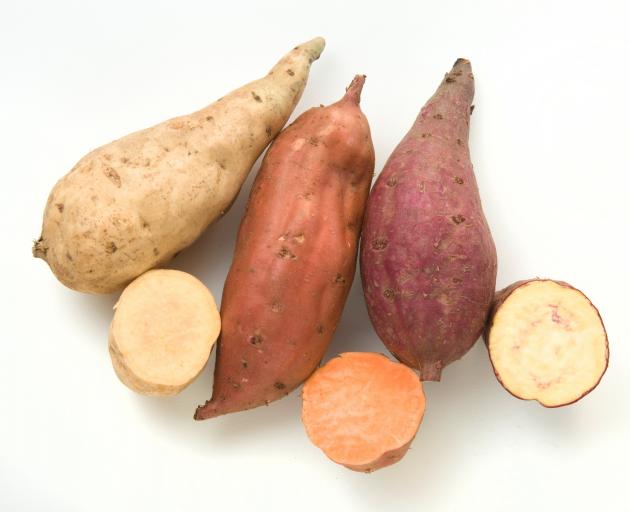 Three of the many kumara colours now grown. Photo: vegetables.co.nz
Kumara is not a staple crop in the South, but Gillian Vine talks to a Dunedin gardener who has grown them successfully.

Although widely grown in the northern half of the North Island, much of the South Island is considered too cold for kumara (Ipomoea batatas). 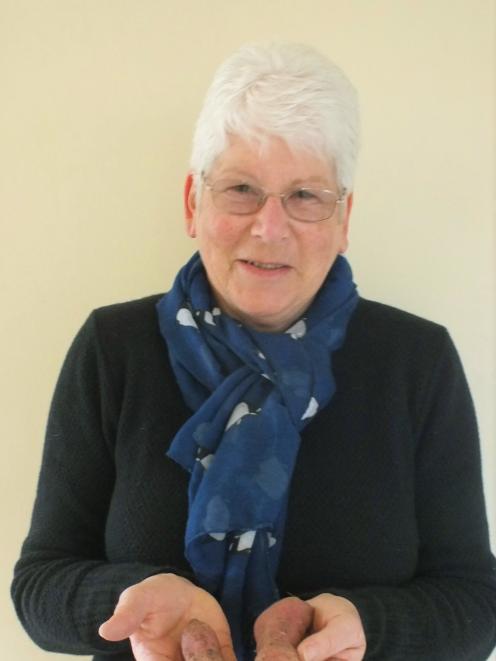 Margaret Dodds with two tubers from the kumara crop she grew as a challenge. Photo: Gillian Vine
"You don't know until you try," she said.

Margaret started with a single tuber.

"I got a really manky one from a greengrocer, as I thought the supermarket ones were too polished [to sprout]," she said.

It was put in a container of vermiculite, a sterile and inert product commonly used for propagation, then set on a propagator for about 10 days, and shooting was soon under way. (This can also be achieved in a hot-water cupboard.)

"It was incredible once it got going," Margaret said. "It was profuse, with probably about 30 shoots in all because when I cut them off, more grew. I gave away lots."

Shoots were detached and put into water to root, the kitchen bench proving the perfect environment for this step. When they were well-rooted, four or five pieces were put into a large plastic tub filled with a free-draining mixture of potting mix, river sand and sheep pellets.

Shoots were set at an angle so the roots would grow horizontally, rather than vertically, and the base of the pot mimicked the hard clay pan that commercial growers find idea for their crops in the Dargaville area, Margaret said.

The container was covered with plastic at night and as the kumara grew, foliage was not allowed to touch the ground, as that would encourage new roots and take the focus away from tuber production.

Margaret said that in Maori kumara fields, long foliage was lifted from each side of the row and flipped over on top of the plant to expose the roots and stop them developing.

Margaret lifted her kumara in April, having balanced the longest possible growing season against the risk of early frost, which can cause rotting in stored tubers.

Being a perennial plant, her original kumara is still producing foliage but she has saved two of her own tubers to grow this season and is hoping for better results.

In the North Island, high summer rainfall means little or no watering is needed and Margaret thinks Dunedin's hot summer may have reduced her crop.

"This year, I'm going to water more," she said.

Asked why she grew kumara, she said:"Because it was something of a challenge. I thought, `I can do that'."

Kumara, or sweet potatoes (Ipomoea batatas), were brought to New Zealand centuries ago by early Polynesian settlers. Native to tropical Central and South America, their presence in the Pacific supports the view that there was extensive sea travel in early times.

From descriptions by Abel Tasman’s men in January 1643, it is clear Maori vegetable growing was a sophisticated industry. This was confirmed during Captain James Cook’s first and second voyages to New Zealand 140 years later, with the accounts of Joseph Banks and William Monkhouse detailing what was grown near Gisborne and the way kumara were cultivated on what Monkhouse called "little molehills".

Horticulture was a serious business, the difference between survival and starvation. It was overseen by major gods, including Rongo, whose special responsibility was kumara, and Pani, the goddess of vegetation and legendary mother of the first kumara.

Special tools were developed and formal ceremonies took place at planting and harvesting time, with mature, undamaged tubers stored for winter use.