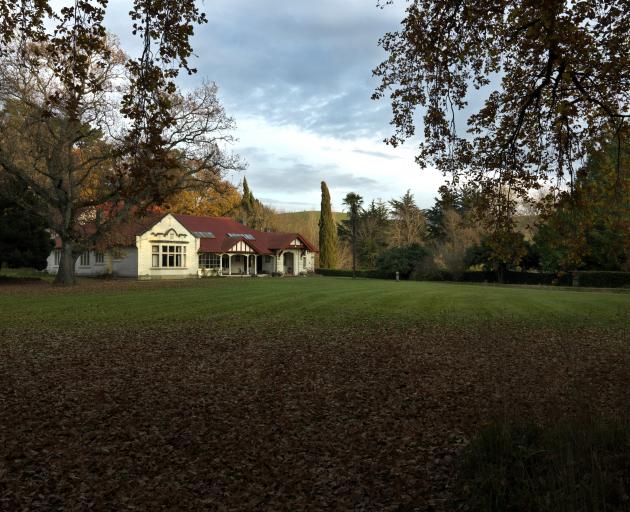 The Oamaru stone homestead replaced the station’s original wooden house and was completed in two stages. PHOTOS: JANE USSHER
New Zealand’s grand rural homesteads are among the most substantial homes built in this country.

Often inspired by the stately English homes their owners left behind, the local equivalents responded to their colonial context, as well as to the variety of functions they served at the centre of a working farm.

The homestead at Kuriheka Estate in North Otago has remained virtually unchanged from when it was first occupied, despite the fact it has long been separated from the 31,000 acre (12,500ha) farm that surrounded it. 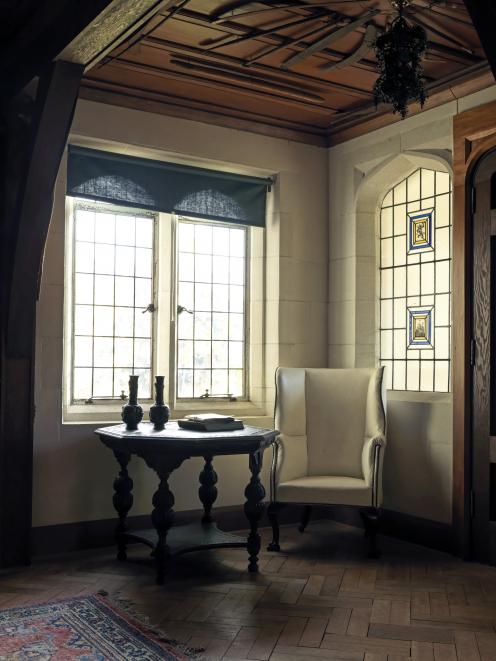 The display of Aboriginal Australian weapons on the rimu ceiling of the entrance hall was collected by Joseph Cowie’s grandfather. Stained-glass doors on either side of the front door are Dutch and date from 1730.
The Oamaru stone homestead sits on a rise above a cluster of heritage farm buildings, including stables that date from 1889, a cookhouse, a shearing shed and a bunkhouse. Now obscured by surrounding trees, the homestead was remodelled in stages between 1889 and 1927 by Colonel Joseph Cowie Nichols, the great-grandfather of present-day resident Tim Nichols. The extraordinary collection of furniture, paintings, military memorabilia and artefacts housed in the homestead was amassed by Joseph Nichols, his mother Mary and his brothers Walter (known as Harry) and Cyril, all enthusiastic and eclectic collectors through the late nineteenth and early twentieth centuries.

Rooms are furnished just as they were when Joseph Nichols died in 1954, with important antiquities, curios, paintings and a library of books that date back to 1471. Family letters and journals have been kept, alongside diaries and accounts of Joseph’s military career, first as commander of the Otago Mounted Rifles and then as commander of the Otago Military District during World War 1. Farm records provide a detailed history of the once thriving station’s past.

Until 2006, the homestead also housed an important collection of more than 600 military medals, including a full set of British campaign medals dating back to the Battle of Waterloo. They were reluctantly sold at auction in London to raise funds to assist with the homestead’s upkeep. 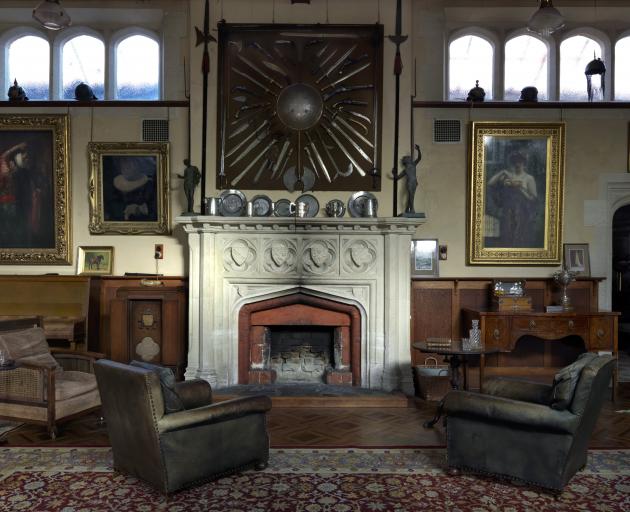 The main hall features a grand Oamaru stone fireplace carved with family coats of arms and has a display of military weapons above.
Tim Nichols grew up in a cottage on the station, where his father was head shepherd, and returned in 1984 with his second wife, Wendy, and their two young children, and a dream of sharing the homestead and its contents with visitors. The couple ran tours of the house and grounds for a time, but a fractured relationship with other Nichols family members and the trust that oversees the property has meant the homestead is now mostly shut up.

Joseph Nichols established the Kuriheka Settlement Trust in 1936 with the intention of preserving the homestead and the associated farm buildings along with 186ha of land. The trust deed and its provisions have unfortunately created a vexed situation for Tim, who is motivated to preserve the house and its contents, but limited in terms of his influence. 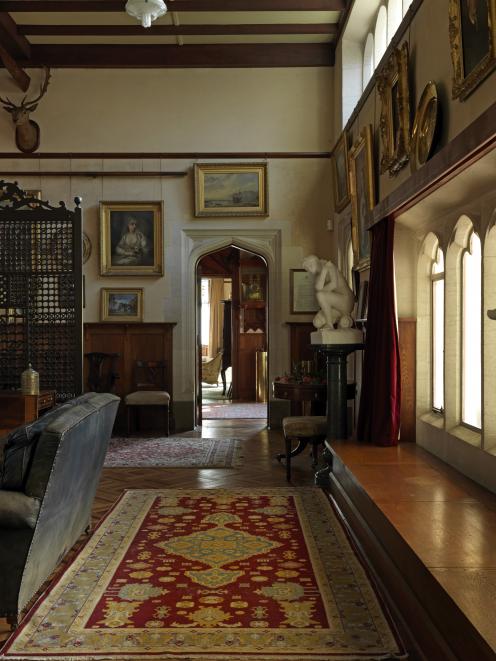 Kuriheka Estate’s Gothic-style windows carved from Oamaru stone and carved doorways add to the hall’s grandeur.
Joseph bought Kuriheka Station in 1885 after spending time in New South Wales as a jackaroo. He was the eldest son of Charles Nichols, who had a successful career in Australia as a merchant for the trading company Dalgety. Charles was sent by the company to Dunedin in 1869, where he became a partner in Dalgety, Nichols and Co — a forerunner of the stock and station agency, Dalgety and Co. He made a significant amount of money for the company — and himself — by sending a consignment of New Zealand wool to England on the eve of the Franco-Prussian War; the shipment is said to have doubled in value as wool prices soared while the ship was still at sea.

Charles died in 1878 when a horse-drawn coach he was travelling in crashed north of Dunedin. His wife Mary was paid out by Dalgety in mortgage certificates held over South Island farms. She headed to Europe the following year with Joseph, aged 19, and his eight siblings, so the children could be educated.

Joseph attended Cambridge University before returning to New Zealand, then continued on to Australia for a grounding in farming. Five years after he bought Kuriheka he married Helen Ayre (known as Nell), whose family station he had worked on in New South Wales. Mary had the Kuriheka homestead’s drawing room erected as a wedding gift for the couple, along with the two-storey stables, which were built to a design she bought in Germany. The stables have a Heritage New Zealand category 1 classification and with their unusual Gothic-inspired arched windows, have a definite European air.

A timber house dating from 1864 already existed when Joseph bought the station. The Oamaru stone homestead that stands today was completed in two stages, in 1905 and 1927, with each stage marked by a foundation stone. The architect for both sections of the house was John Forrester, whose father founded the firm, Forrester and Lemon, which designed many of Oamaru’s best-known limestone buildings. 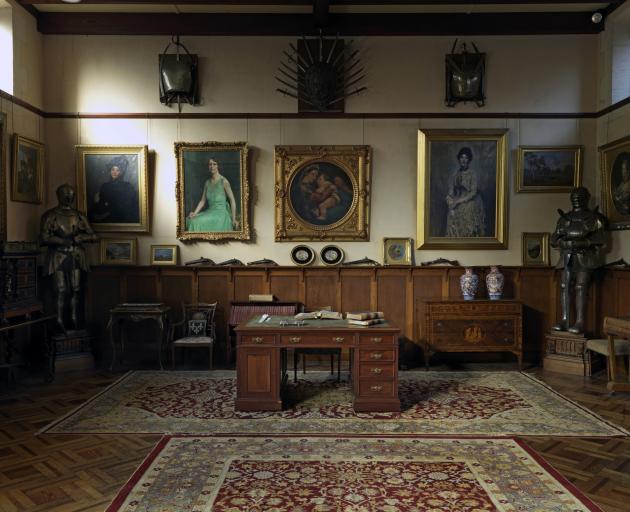 A suit of tournament armour (on the left) is believed to have belonged to a young Louis XIV.
The drawing room gifted by Mary is the oldest room in the house. Originally, it had a timber exterior and rammed-earth walls. When the front of the house was rebuilt in 1927, this room was enclosed in Oamaru stone and bay windows were added, which display family coats of arms as well as those of schools and colleges that Nichols family members attended.

Across the entrance hall is the house’s crowning glory: the Scottish-style baronial hall, also added in 1927. It is a massive room with a soaring 4.6m-high ceiling and a grand Oamaru stone fireplace carved with ancestral coats of arms.

The now-loose rewarewa parquet floor is scattered with Belgian rugs, and the walls are adorned with family portraits, including paintings of Mary Nichols and her sister Emily by the portrait artist, James Jebusa Shannon, which are said to have once hung in the Tate Gallery in London. Alongside antique military helmets and a display of weapons from Europe, Asia and Africa is a suit of French tournament armour reputedly made for a young Louis XIV. 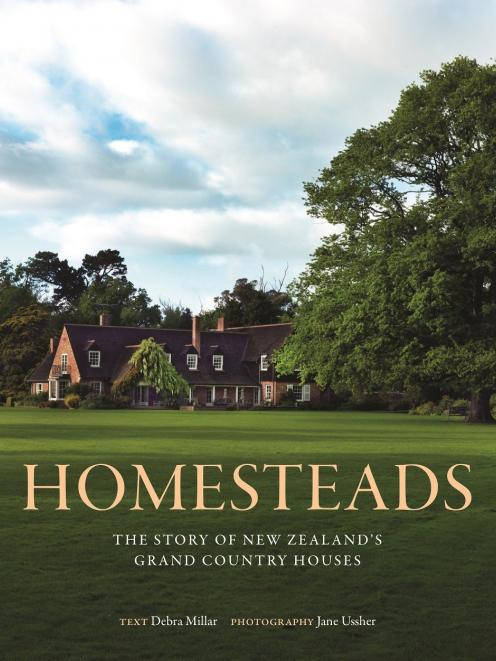 Furniture dates from the Hepplewhite and Chippendale periods in the 1700s. The room features clerestory skylights that wash it with morning light, and, although large, Tim insists it served his family well as a sitting room.

In the entrance hall, Dutch stained-glass windows dated from 1730 frame the heavy timber front door. A display of Aboriginal Australian boomerangs and tools from Tasmania is an unexpected discovery affixed to the room’s rimu ceiling.

The study, which was added as part of the 1927 additions, is set up just as it would have been found in Joseph Nichols’ day, with books and farm records kept in Edwardian-style glass-fronted bookcases. A reading table in the centre of the room was built from an oak tree felled on the farm.

Although the 2000sq m, 32-room homestead is largely unoccupied these days, with Tim now the only inhabitant of the two-storey servants’ wing at the rear of the house, it is far from neglected. Tim is a passionate custodian and enthusiastic protector of his family’s past, and happily continues to share the stories of this remarkable home.

The Otago Daily Times has a copy of Homesteads: The Story of New Zealand’s Great Country Houses, written by Debra Millar with photos by Jane Ussher, to give away. To enter the draw, email playtime@odt.co.nz by Friday, October 23, with your name, address and day-time phone number in the body of the email and "Homesteads" in the subject line.