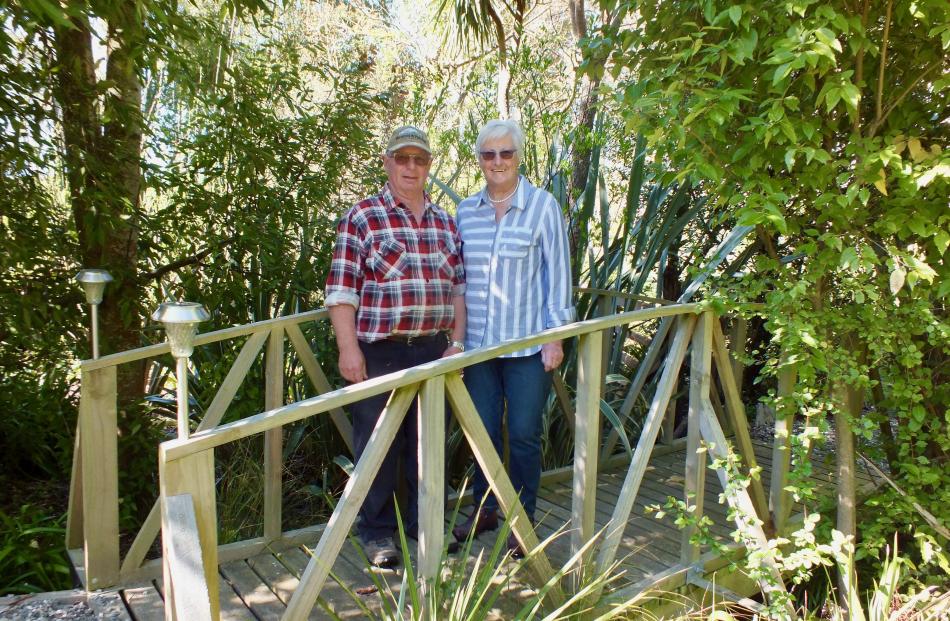 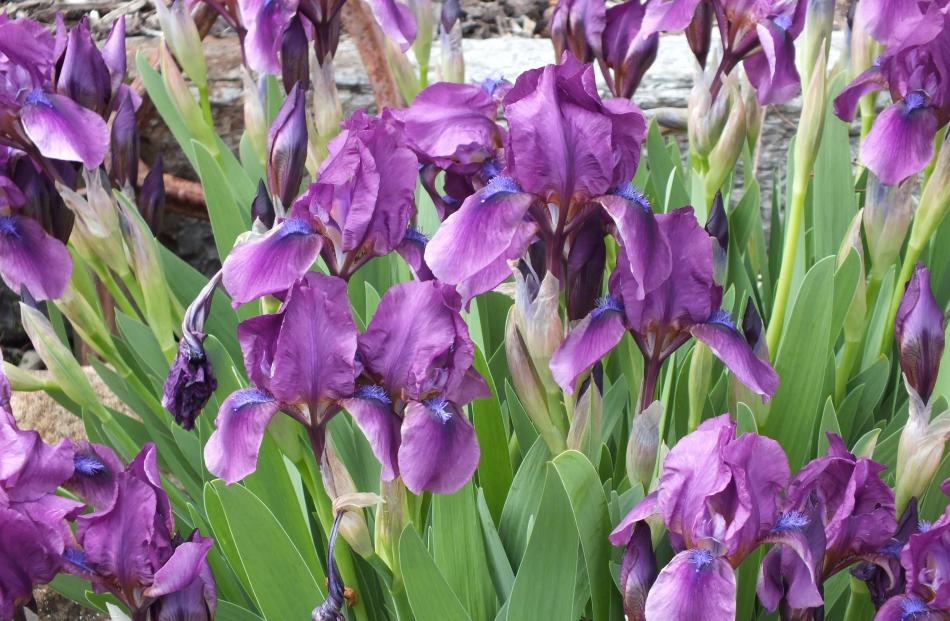 A clump of early-flowering irises in Diana Dixon's rockery. 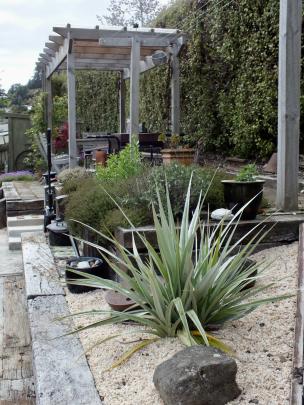 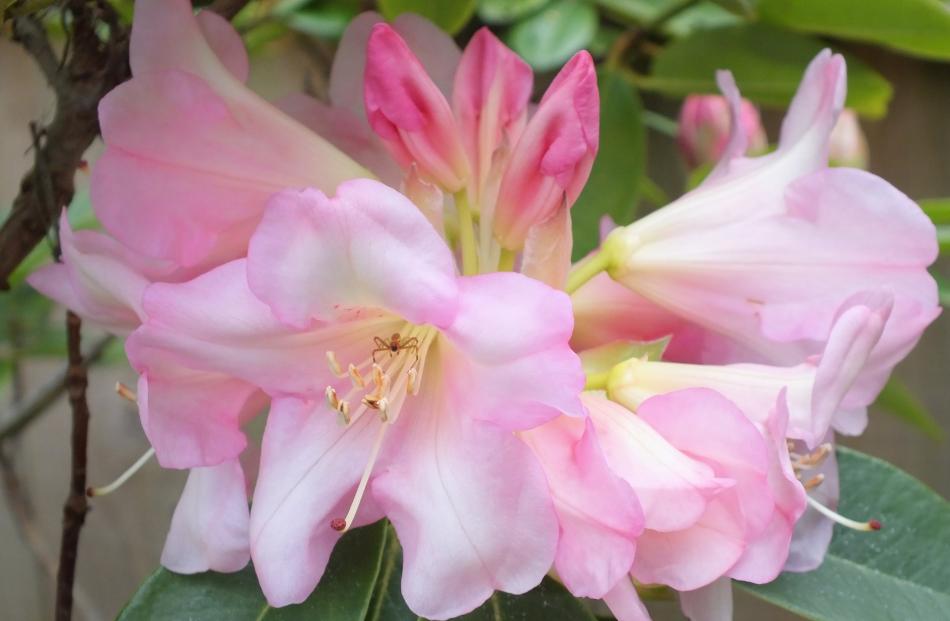 The Dixons successfully moved several rhododendrons from their previous property.

Fingers crossed for good weather tomorrow and on October 28 so gardeners won't need their gumboots and raincoats to look at other folks' gardens.

October is always a popular month for garden tours and this year two popular events return.

The first is the the Waikouaiti-Karitane Presbyterian Church's biennial garden tour, which runs tomorrow from 11am until 4pm.

Among the six featured gardens is Kingscliff, Karitane. Originally the home of Plunket founder Sir Truby King, it offers the opportunity to see the house's setting in extensive grounds where the owner could indulge his passion for gardening. 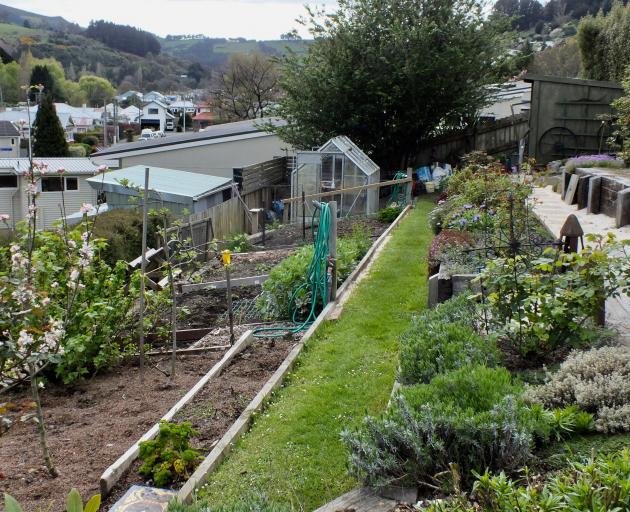 Starting with a steeply sloping lawn, Diana and Gary Dixon revamped their Northeast Valley garden. Photos: Gillian Vine
A modern landscaped garden at Waikouaiti will show tomorrow's visitors how a potentially problematic section has been developed into a multi-level garden.

Owners Margaret and Barry Sloper bought the property five years ago. They had lived in the Maniototo for 40 years until Barry sold his butchery and they moved to Christchurch, where he drove tour buses. 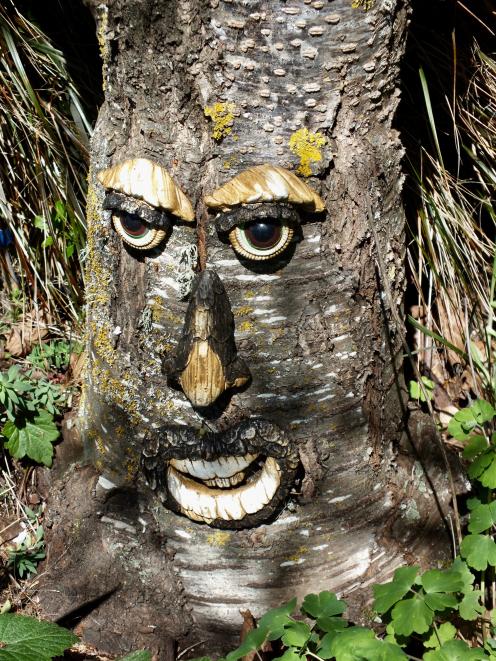 Margaret Sloper added this quirky highlight to a tree trunk.
Gardening in Waikouaiti was quite different from their earlier experiences but, as Margaret says, "We were lucky the bones of the garden were there.''

That included numerous trees around the boundaries. Planted in the 1970s, they now need judicious thinning to remove the "quick fills'' popular at the time, notably trios of silver birches, whose pollen "is just terrible'' for the allergy-prone, Barry says. This will enable the best specimens to be retained and given breathing space, he says.

The 0.4ha property has three distinct zones, which dictate plant choices. At the top, alongside the house, is the driest area, where spring bulbs beam at the sun. Just below the house is a damper spot, ideal for roses and more bulbs, such as tulips. The terrace garden has similar conditions, so dahlias have been planted for colour from early summer.

The third zone is the largest, a peaceful spot of lawn and trees, dotted with new fruit trees. It can be damp but not as wet as the adjacent bog garden, which has perfect conditions for Margaret's Japanese (ensata) irises, which love to have their feet wet and heads in the sun.

Although "gardening's a lot easier here than in Ranfurly'', Margaret says judicious plant choices are necessary because of the terrain.

Terrain also dictated the revamp of a Northeast Valley garden, one of more than a dozen in the area that will be open on Sunday, October 28, from 10.30am to 4.30pm, in the Loved but not Lavish tour, a fundraiser for The Valley Project. 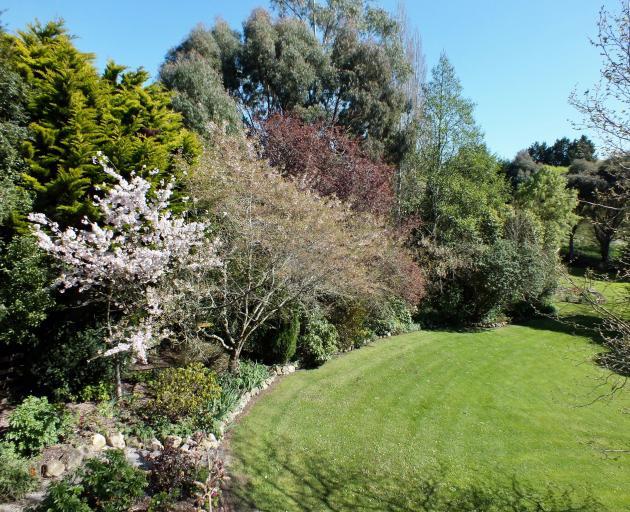 Trees frame the lower section of Margaret and Barry Sloper's Waikouaiti garden.
When Diana and Gary Dixon moved into their Grey St house, the back garden was a steeply sloping lawn, bisected by a path.

First, Gary replaced an existing deck with a pergola for outdoor dining and views across the valley to Mt Cargill. Other structures followed, often made of recycled materials. Terracing to create a rockery and productive vegetable beds followed, the aim being a user-friendly garden where they could remain in retirement.

"For me, coping with straight lines has been a challenge; I've always been a cottagey, flowing-everywhere type of gardener,'' Diana says.

Barry says: "She is definitely the plant person and I'm the labourer.''

The community-based garden tour is likely to surprise people with the number of "tucked away surprises'', Diana says, as there are gardens that have been established for many years and give insights into early plantings of trees and shrubs in the area.

• Tickets for the Waikouaiti-Karitane tour cost $10, which includes Devonshire tea, and are available from the church hall, Kildare St, Waikouaiti, where there will be plants and produce sales.

• Loved but not Lavish tickets are $10 and available from Blacks Road Green Grocers, Blooming Gorgeous and The Valley Project, as well as online at admin@northeastvalley.org.nz.