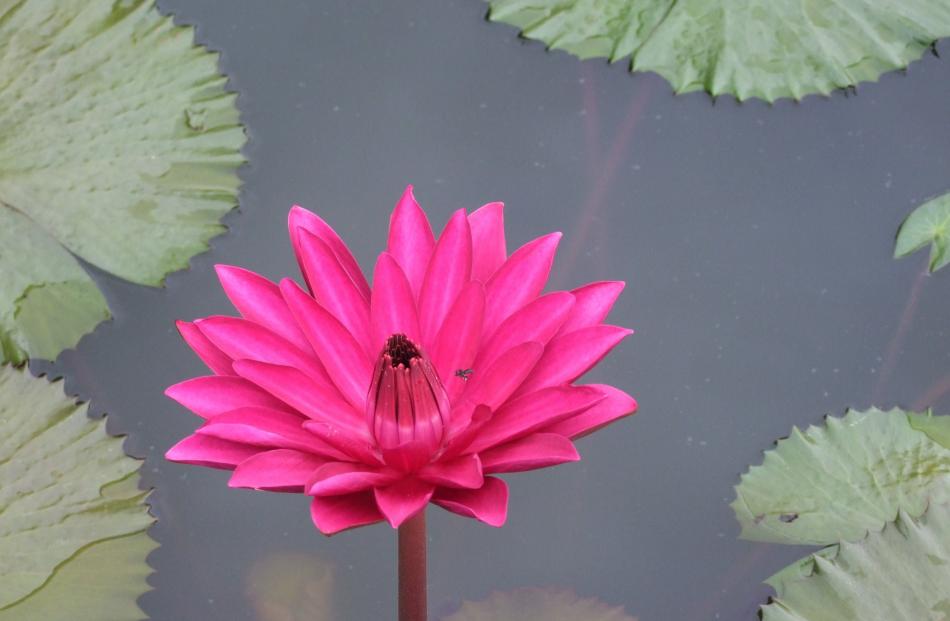 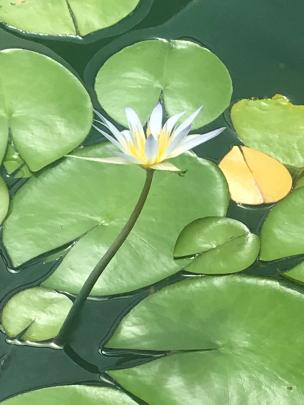 The blue blooms of the Blue Nile lotus (Nymphaea caerulea) fade with age. 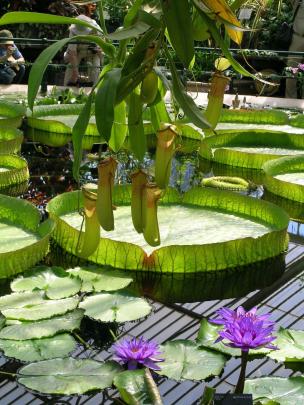 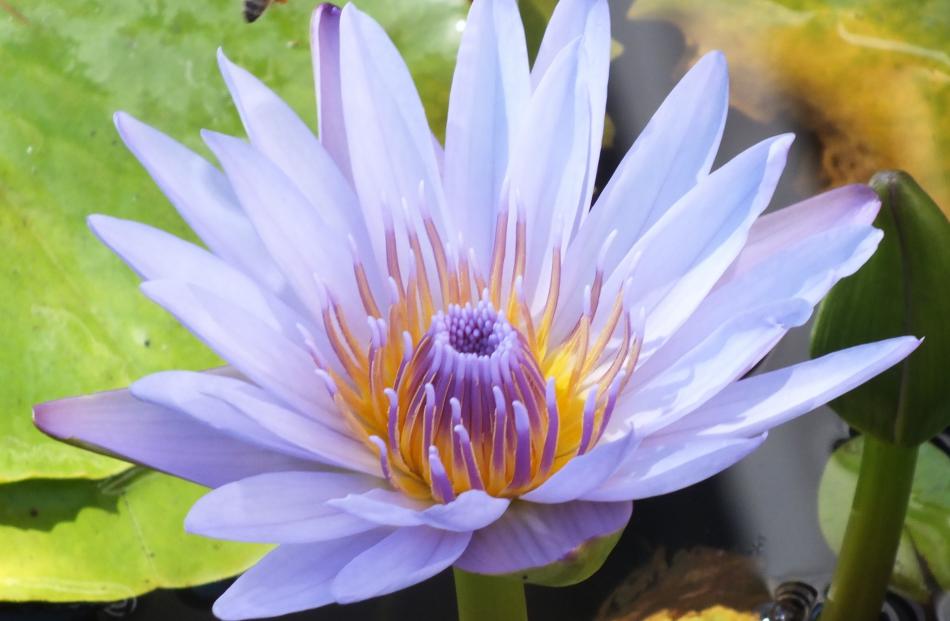 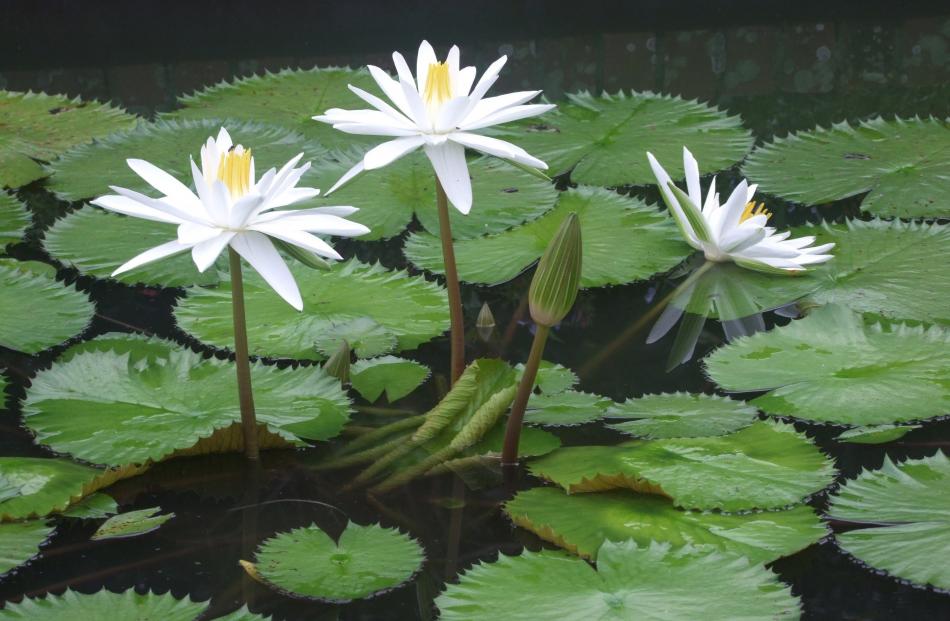 Asian water lilies raise their flowers high above the water.

Sex and water lilies are not words I thought I’d ever put in the same sentence but a visit to the Adelaide Botanic Garden earlier this year has me doing just that.

In its hothouse, the garden has a water-lily pond, whose exhibits include the giant Amazon lily, Victoria amazonica.

Now the national flower of Guyana, it was named for Queen Victoria and the river basin where it was discovered by Czech botanist Thaddeus Haenke.

Although most of his time was spent in the Americas, Haenke has a New Zealand connection, as he took part in Spain’s Pacific expedition that visited Doubtful Sound in February 1793. The following year, Haenke moved to Bolivia and remained there until his death in 1816. He is best remembered for finding V. amazonica. 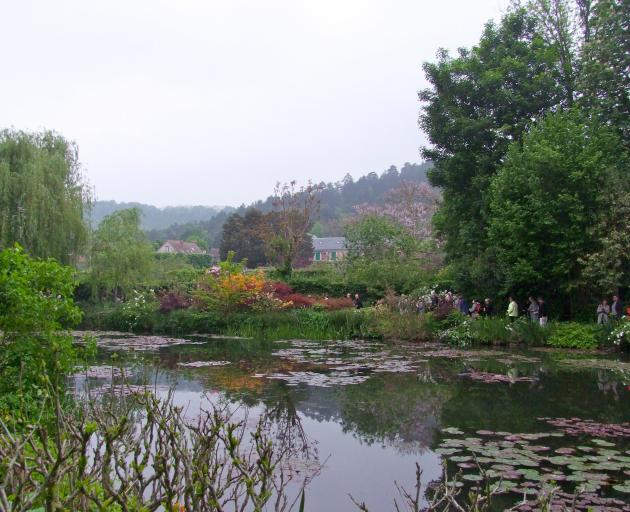 Lily pads float on the lake at Giverny, painter Claude Monet’s home. PHOTOS: GILLIAN VINE
During the day, V. amazonica’s pink petals are unfurled, then close at night. After dark, the water lily’s scented blossoms become the scene of a sexual romp. Small black beetles, having drifted around the lily house during the day, sneak in just before V. amazonica shuts down for the night.

The petals close over the insects, which then make merry in the dark, eating, drinking and fornicating in an atmosphere several degrees warmer than the lily’s outer petals.

After all that activity, the insects are coated with pollen and thus carry out an important pollination role in the life cycle of their host.

Keeping the Amazon group company in Adelaide is another water lily named for a river, the blue Nile lotus (Nymphaea caerulea).

In an interesting parallel with the Bible, the Ancient Egyptians believed that, in the beginning, darkness ruled the world until a lily appeared. When its petals opened, the sun god was seen seated in the golden centre. He banished darkness and life began.

The blue Nile water lily has a somewhat darker side. Like other Nymphaea species, it contains aporphine, giving the user a high. Known for this reason as Egyptian dream plant, it is now banned in Russia, Poland and Latvia.

Blue is popular elsewhere, too. In Asia, blue-flowered N. nouchali is a common sight in wetland areas. Reflecting its long association with Buddhism, it is the national flower of Sri Lanka, Bangladesh and the Indian state of Telangana (formerly Hyderabad).

In Taiwan, the petals are dipped in honey and nibbled as starters. 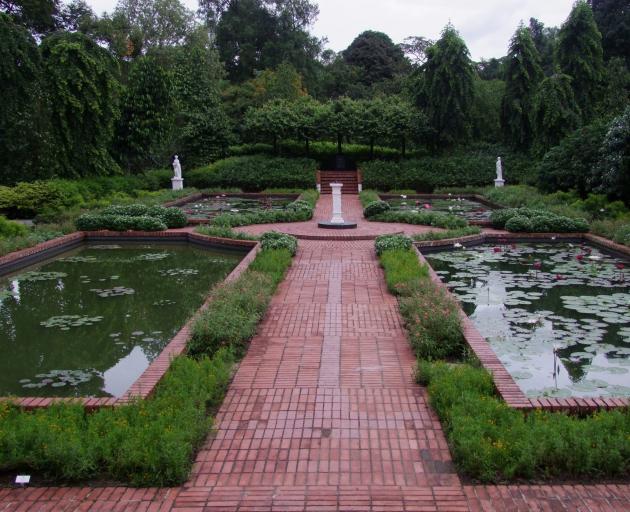 The lily pond in the Singapore Botanic Gardens looks like a tropical clone of an English garden scene.
For strong colour and perfume, though, the magenta pink Nymphaea Red Cup is just about unbeatable. Unlike most water lilies, it is a night-blooming beauty whose flowers unfurl in early evening and remain open until about mid-morning. Another of Red Cup’s attributes is its 20cm leaves, whose dark bronze-red colour complements the flowers.

Few of us have the facilities to grow warm-climate water lilies but don’t give up, as there are hardy varieties available in red, white, pink and yellow. Expect to pay $20 to $40 for a plant.

Flowers of hardy varieties do not have the long stems of their tropical cousins but float on the pond surface.

The best display of hardy water lilies I have seen was in an old bath in a West Otago garden. It was late spring and they were at their peak, cream and pink flowers jostling for space on the water.

Grow water lilies in baskets that will survive under water. Into the basket, put heavy soil (not compost) enriched with aquatic fertiliser tablets, then plant the lilies. Press small stones or gravel firmly on top of the container to help hold the soil in place, then very gently lower the basket into still (never running) water.

Then, when they flower, have a Monet moment and get out your oil or watercolour paints.