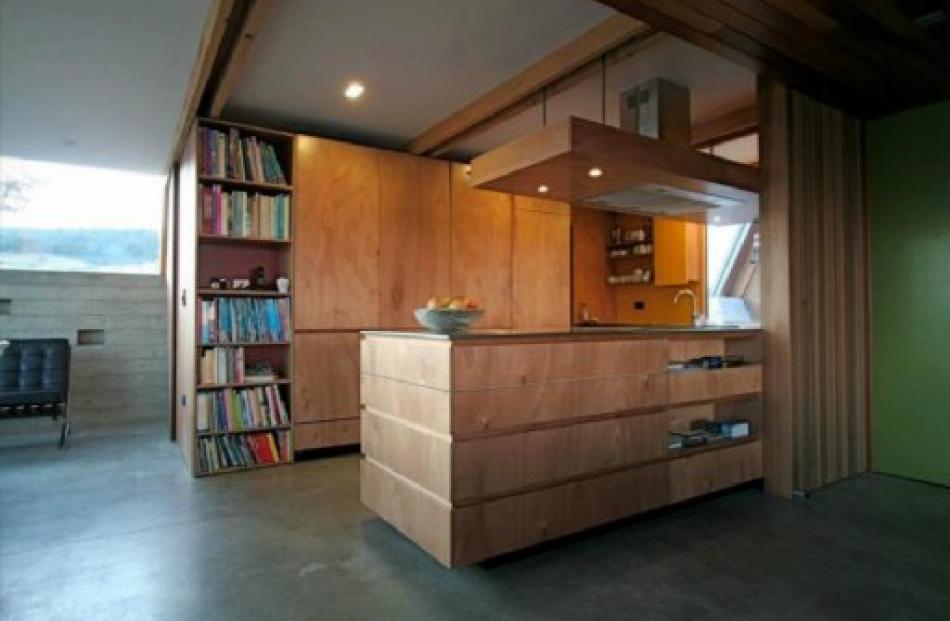 The concrete wall seen in the left of this photo runs the length of the property, absorbing solar heat and slowly releasing it as the house cools. 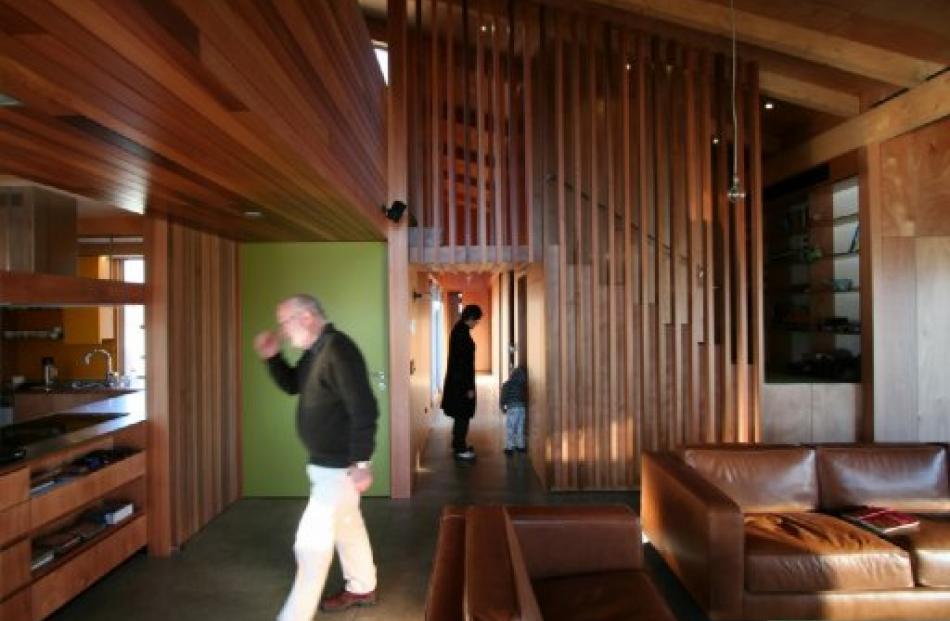 Although Doug Lovell still works two days a week, the day he and wife Kate moved in was officially the first day of their retirement. 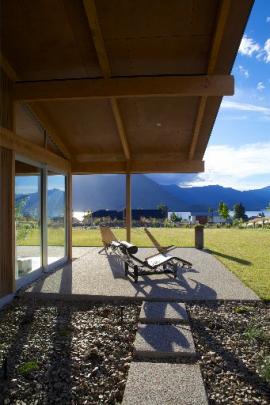 The house is on the eastern side of Lake Wanaka with views towards Treble Cone. 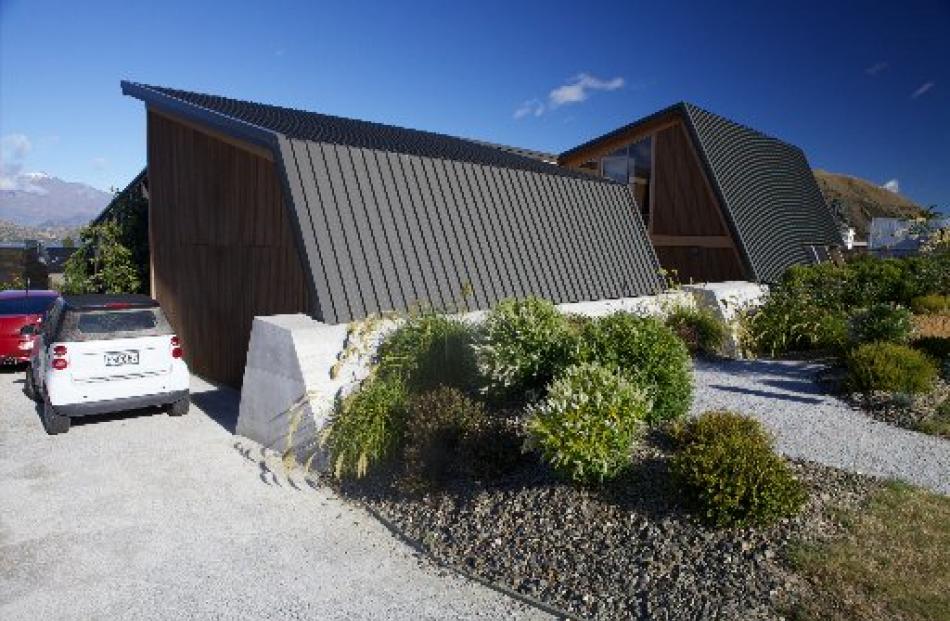 At the street, the roof becomes the walls and the walls, the roof. 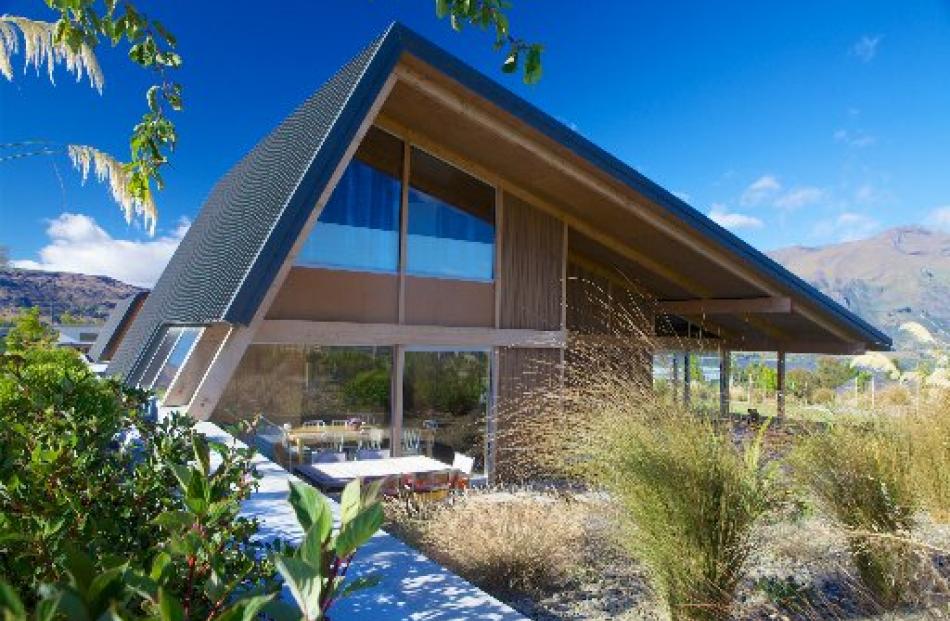 The home's bold form was inspired by old miners' huts which often consisted of a sheet of roofing iron supported by a rock wall. Photos by Tim Lovell. 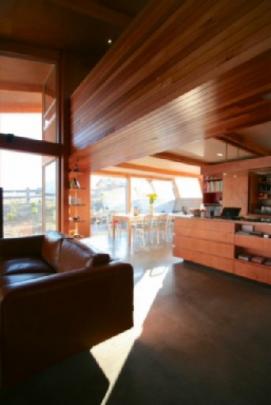 When a Dunedin couple wanted someone to design their retirement home, they knew exactly who to turn to. Kim Dungey reports.

Designing a retirement home for his parents could not have been more satisfying for former Dunedin man Tim Lovell.

''I was a bit nervous about doing a house for them because obviously you can't get away from your parents if they don't like the end product,'' he laughs. ''But it was great working with them, as they were both incredibly supportive and trusting.''

Lovell designed the Wanaka house with a friend from architecture school, Ana O'Connell.

Both graduated from Victoria University in 2002 and worked for Wellington firms before establishing their own practice, Lovell & O'Connell Architects, in the capital.

The first project undertaken by the firm, the Wanaka home also signalled a fresh start for the house's owners, who were leaving behind busy lives in Dunedin.

Kate Lovell was executive officer at the Dunedin College of Education, then publicist for Dunedin's professional orchestra, Southern Sinfonia, in which she still plays double bass.

Doug had a dental practice in Mornington and was convener of the Regent 24-hour Book Sale for 30 years. He now works two days a week in Cromwell.

The couple had holidayed in Wanaka for about 30 years and considered turning the family crib into a permanent home but it was small, didn't get enough light and would be difficult to alter.

Instead, they bought a section on the eastern side of the lake with views across the water to Treble Cone.

O'Connell says the home was the first in a new subdivision and with no other housing to respond to, they ''looked to the broader landscape and the history of the place, taking cues from the old miners' huts and how they connected with the land and provided a strong sense of shelter''.

The simple huts often consisted of a sheet of corrugated roofing iron supported by an existing rock or pile of schist.

The low concrete wall which runs the length of the house from inside to out is a reference to the schist walls of these huts, while profiled metal cladding used for the roof also forms a wall of privacy at the street.

The concrete wall, which frames the northern courtyard, was cast on site using timber shuttering.

Like the schist rock outcrops in Central Otago that have been sculpted by the wind and colonised by tiny plants, the board-marked concrete has a grainy texture and small nooks in which Doug Lovell, a keen cook, grows herbs.

As with the exposed concrete floor downstairs, the wall acts as a solar mass, absorbing heat during the day and releasing it later.

A gap midway along its length gives access to the entry courtyard. The owners' bedroom and bathroom are to one side of this patio and the living area, kitchen and dining area to the other, with two guest bedrooms and a bathroom on a mezzanine above.

A second courtyard opens off the north-facing dining area.

The den in the centre of the ground floor is where Kate plays her double bass but can also serve as a second lounge or another guest bedroom.

More traditional than the rest of the home, this space houses treasures from the couple's former property: Persian rugs, a grandfather clock, Doug's first-edition books and his father's roll-top desk.

Cutting into the site and lowering the building platform by 1.4m provided a strong connection with the land and allowed sheltered outdoor areas to be created on the windy site.

Doors facing the lake can be left open even on windy summer days, as the prevailing northerly blows across them without gusting inside.

Capturing the sun was vital when the owners are retired and spend much of their time at home, but it was also important the house did not overheat in summer.

Modelling the house using 3-D software and feeding in the co-ordinates enabled the architects to accurately work out when and where the sun would enter the house throughout the year and how deep the eaves should be.

Above-building-code insulation and double glazing conserve heat in winter, while underfloor heating is powered by an air-to-water heatpump.

The material palette was limited to concrete, cedar and ply, the latter providing a warm glow inside. There is only one

plasterboard wall in the house.

''Because all the linings and all the structure is exposed, it had to be built perfectly,'' Lovell says, ''and [builder] Tony Quirk, to his credit, did an amazing job.''

Kate Lovell says the house is ''fabulous'' and she and her husband have been very comfortable there: ''We're really proud of [Tim] and Ana.''

The 200sq m house (plus 50sq m garage) was ''extremely cost effective'' Tim says, partly because of when the contract was let but also because it was a relatively simple form to construct and the design did not call for expensive fittings, he adds.

Handles for doors and cabinets were made by cutting up L-section stainless steel to 150mm lengths.

Carpet was laid in some areas but most of the downstairs area has a concrete floor. The light fittings are bare bulbs with $9 bayonet fittings.

Three years on, the best thing about the project is that his parents are ''chuffed'' with the place and love living there, Tim says.

''The house is already beginning to have that shared family history, as we go down there with our kids to spend time with them. My son, Sam, even asked whether we could move in with them.''

The inside story
Who: Well-known Dunedin residents Doug and Kate Lovell moved to Wanaka in June 2011.
What: Designed by their son, Tim, and his business partner, Ana O'Connell, the house took its cue from Central Otago miners' huts that provided a strong sense of shelter in an exposed environment.
Where: Infinity Dr, Peninsula Bay, Wanaka.