The art of the flexible 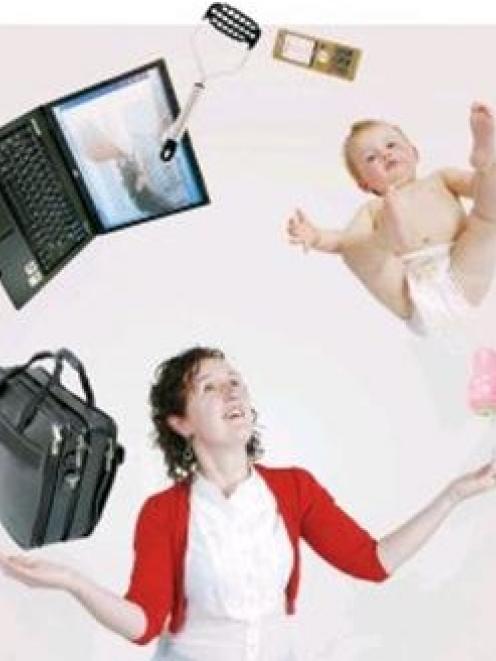 Kate Hesson juggles work and family.
Labour Day commemorates the struggle for an eight-hour working day but as it rolls around this year, many New Zealanders are working far more than that. At the same time, politicians are talking of work-life balance and flexible work arrangements. Kim Dungey reports on the ultimate juggling act - balancing work with the rest of our lives.

It's 1.30pm on Monday and Marie Callander has just arrived back at work after an hour and a-half away. Her granddaughter, Evie, has been airlifted to Starship Hospital with breathing problems.

Callander, a 51-year-old solicitor, already has a flexible work arrangement that allows her to take care of Evie on Wednesday afternoons. Today, she has been able to drop everything and spend time with the 6-month-old before she is flown to Auckland.

Down the hall, fellow solicitor Kate Hesson has only two more hours left at work. Mother to a toddler, she leaves at 3.30pm most days and does not come to work at all on Fridays.

While people like Marie Callander have long juggled job and family commitments, those working flexible hours are no longer the exception.

New research from the Families Commission shows more than three-quarters of those surveyed for the study, Give and Take - Families' perceptions and experiences of flexible work in New Zealand, had access to or used flexible work arrangements.

The report's release came three months after the passage of legislation giving employees with care responsibilities the right to request flexible work arrangements.

And the practice is likely to increase as more people engage in further education, more women take up paid work, skill shortages grow and the population ages.

Flexible work can include the ability to vary start times, finish times or lunch breaks; work from home, take time off for school holidays or special events, and make up work time later or in advance.

Some people also include part-time work or a later, but fixed, starting time in the definition, although the Commission says those arrangements can actually be quite rigid.

Reported benefits for employers include increased staff morale, the ability to attract staff who might otherwise have been unable to work, and higher staff retention, resulting in savings on recruitment and retraining costs.

In some places, it allows for commuting outside of peak rush hours. Flexible work also enhances family life.

The New Zealand study found it increased opportunities for families to spend quality time together, enabled them to meet their care responsibilities while maintaining their participation in the paid workforce, and reduced stress.

For some this simply meant knowing what their children were doing, being able to drop them at school or accompany them on class trips, being able to take holidays together, or take advantage of limited time left with elderly relatives.

But some argue that flexible work is still seen as mainly the domain of working mothers. They claim there is still pressure on men to work full-time and that a male who asks for reduced hours may not be seen as committed to his job.

Others say that everyone has a life outside work - not just parents - and the right to request flexible hours should be extended to all.

One woman writing in an online community for women executives, complained that colleagues with children started their work days later, thanks to flex-time, but ruined her evenings because they emailed her late at night and expected responses.

She asked how "non-parents" could assert their right to work-life balance, too. For some families in the New Zealand study, flexible arrangements came at a cost. They talked of the spill-over of work into home life, and a constant feeling of juggling work and family responsibilities.

Others felt they had experienced slower career progression and had to trade off flexibility for job quality, pay and status.

Kate Hesson - who, like Callander, works for Anderson Lloyd Lawyers in Dunedin - says she constantly feels she is not doing justice to anything. The key, she finds, is to prioritise where her efforts need to go and not try to be a perfectionist about the rest.

• Flexibility is even more important for Hesson than most, as her husband Mike - Otago and New Zealand A cricket coach - is sometimes out of town or out of the country for weeks on end.

If she worked full-time, there would be periods when 20-month-old Holly would see little of either parent. So for now, she is not seeking promotion and works from the office 25 hours a week while Holly is cared for by her grandmother and a home-based service.

Returning to work when her daughter was 7 months old, rather than being a cause of guilt, was a "relief", she says.

At home, she obsessed over the minutiae of child rearing. Work gave her something else to focus on and a sense of getting herself back. But the shift to part-time hours was initially a struggle.

"I was working every hour I could to try to maintain the work practices I had as a full-time worker," she says.

"I didn't say no. I thought I was good at handling a high workload and high volume of stress."

Later, it was decided that to make her job work, she would shed overall responsibility for clients. The commercial property work she does is not completely "transferable" and deadlines can't generally be moved.

So Hesson works closely with her colleagues and on the one weekday she is not in the office, she can still be contacted by cellphone or email. If she has something big on, she works at night.

"I don't ever switch off completely."

The flexibility extends both ways, she says, adding she might have to call the doctor from work or pick something up from the supermarket in her coffee break and has recently changed her day off from Wednesday to Friday.

Hesson would eventually like to become a partner and, like her employer, sees the part-time arrangement as a "blip on the radar".

"Implicit in their thinking is 'If we give flexibility now, we maintain their loyalty' . . . And my estimation for my employer has definitely increased, given their flexibility."

But her perception is that some clients do not want to deal with part-timers. And not all employers are so accommodating.

The 31-year-old associate knows of at least one working mother who was encouraged to resign rather than take maternity leave and return to work afterwards.

For Marie Callander, the work-life balance plugged by politicians means giving things their proper priority - "organising yourself so that when you're at work, you can give it your best but at home, you don't try to drag work into a space that should be used for rest, relaxation and refuelling".

Callander had been with Anderson Lloyd only a few weeks when granddaughter Evie was born with a rare chromosonal disorder. Evie's mother has a business to run and caring for the girl one afternoon a week seemed a practical way of helping.

Callander found she could take that afternoon off and still work full-time simply by starting earlier in the mornings.

For most of the week, she is seeing clients, drafting contracts, looking over documents and preparing settlements. On Wednesday afternoons, she changes nappies, reads stories, gives Evie her bottle, and puts her to bed.

Clients make appointments in advance so keeping Wednesday afternoons free is relatively easy and not much different from her being off-site at a meeting, she says.

"If something happens to do with work I've got on, I've told them 'by all means find me', but it's never happened."

Callander would probably have been willing to work part-time if her employers did not agree to the arrangement but she knew that was not going to be the case.

"They were totally supportive."

"I think if you do the best you can when you're at work, people are much more willing to be flexible," she says, adding one of the benefits for employers is retaining knowledge within the firm.

Callander also juggled job and family commitments while bringing up her three children and later nursing her dying mother. For much of that time, she was teaching and studying.

"You can do these things," she says.

"You've just got to be a bit imaginative and have the will."

Setting priorities and not panicking when something unexpected happens also help, she says: "If you're well organised and there's a minor hiccup, you can cope with it. If you're constantly living in a shambles it's pretty hard to deal with one more catastrophe."

So why should employers be interested in employees' home lives?

"Because workers are whole people and family life is a pretty important part of the whole person," she says.

"Also, if people are able to give proper attention to their family lives, I think they are more productive at work."

For both women, their chosen arrangements may make life more complicated but the benefits outweigh any negative consequences. Hesson no longer socialises much with colleagues and has little time for herself but is still "really pleased" with how her life works.

"I don't think you can put your life into boxes. You just switch priorities," she says, before recalling one day off when she was at home with her computer on the benchtop.

"Holly fell asleep in her highchair while I was doing [work-related] emails and I didn't notice," she says, laughing.

• Since July, workers who care for others have had the right to ask their employers for flexibility in their hours, days or place of work.

• To be eligible, workers must have worked for their employer for at least six months, and not have made another application within the past 12 months.

• Employers must consider and respond to the request within three months.

• Workers should include the fact the request is made under the Employment Relations (Flexible Working Arrangements) Amendment Act 2007; the change they would like, whether it is permanent or temporary and how the change will help them provide better care.

• Not a caregiver? While the legislation applies only to those caring for others (such as children or the elderly), the Council of Trade Unions suggests asking anyway, saying if you want to do voluntary work, coach a sports team or study, there is nothing stopping you from asking for work arrangements that make it possible.