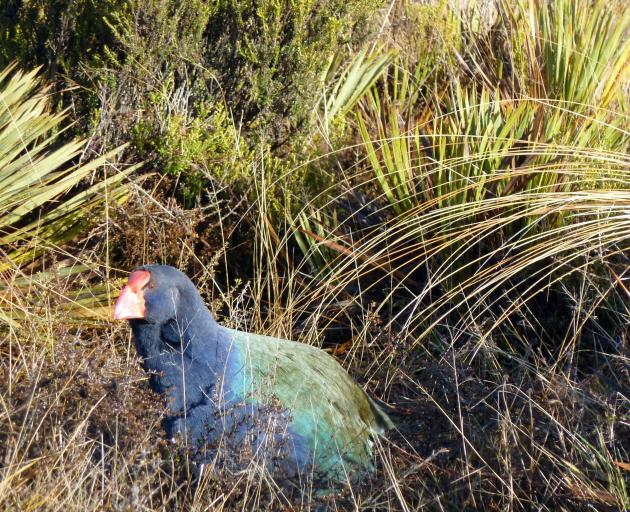 A takahe in its natural habitat. Photo: Alina Suchanski
Dr Geoffrey Orbell is best known for his 1948 rediscovery of a bird known as notornis, or takahe, that was believed to have been extinct for half a century. Seventy years ago, the news of his discovery stirred up the ornithological world and made headlines across the world. But there was more to Doc Orbell than the takahe. Alina Suchanski takes up the story.

The water taxi drops us off on a stony beach at the mouth of Point Burn near the entrance to South Fiord, Lake Te Anau. It's July 2010 and I'm one of three volunteers from the Fiordland Tramping and Outdoor Recreation Club on a trap-checking mission in the Murchison Mountains. The track starts off flat, but soon turns up steeply. It's so overgrown that I trip over twice, breaking all the eggs I carried in my six-pack container. The going is slow, as we have to clean and rebait every trap with meat and eggs. We climb to the saddle overlooking a glacial valley with a lake that's completely frozen over, and then sidle down the steep slopes to the valley floor. At this point I'm unaware that we are following in the footsteps of Geoffrey Orbell, who came here in 1948 in search of a bird that was thought to be extinct. 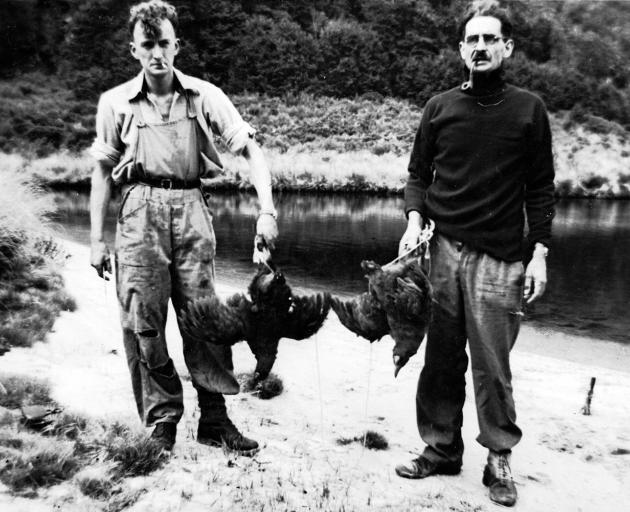 Geoffrey Orbell and Neil McCrostie with a takahe on November 20, 1948 - the day of its rediscovery. Photo: Orbell family collection
"He was a driven man through his entire life. Whatever he did, he did with a passion and commitment that was all-consuming. He had a most active mind and was extremely fit. He never stopped." This is how daughter Lynley Charteris describes her father, Geoffrey Orbell.

He was an extraordinary man in many ways. Even his appearance made him stand out among his peers. Tall and broad-shouldered, he stood 1.94m and wore size 12 shoes.

A keen hunter, fisherman and hiker with a spirit of a true discoverer, Orbell was one of the founders of the New Zealand Deerstalkers Association and its first president, holding the position from 1938 to 1952. Doc (as he was commonly known) loved Fiordland and felt at home in this toughest, most inhospitable corner of New Zealand. His idea of leisure was climbing through previously untracked territory. He spent many of his weekends and holidays trail blazing in the wild Murchison Mountains on the west side of Lake Te Anau.

"The Murchisons were where the action was and when not at work I was either mentally or physically at Te Anau," he wrote in his memoir, Seventy Years in Fiordland.

When Geoffrey was about 11, he found a picture in his mother's photo album of a strange bird in a glass case at the Otago Museum. When he showed interest, she presented him with a picture of a notornis (takahe) cut out of the 1911 Christmas issue of the Otago Witness, saying it was last seen in 1898 but was since presumed extinct. He was intrigued and later, in search of the bird, spent years exploring the great white spaces marked on the Lands and Survey Department maps as unexplored. 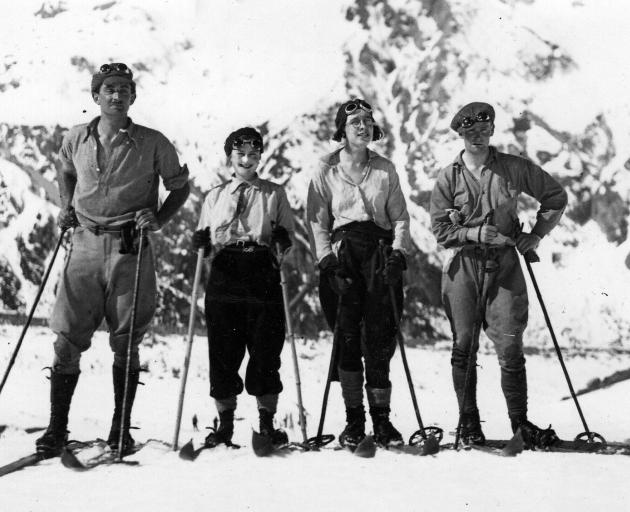 Members of the Otago University ski team 1930, Geoffrey Orbell first on left, Sheila Houston third from left. Photo: Orbell family collection
In April 1948, Orbell set out on a hunting trip into the Murchison Mountains with Neil McCrostie and Rex Watson. Here, at the lake that would later bear his name, Orbell shot a stag and heard a call of a bird he could not identify. On the sandy lake shore, he saw a trail of unusual bird footprints. But there was no time to investigate, as the men had to hurry to get back to their boat before dark.

On November 20, 1948, Orbell returned to the lake accompanied by his two friends and Watson's girlfriend, Joan Telfer, and this time he found what he was looking for: a living notornis. They caught two birds and photographed and filmed them.

The discovery became an overnight sensation and made news around the globe.

Born on October 7, 1908, Geoffrey Buckland Orbell grew up on a farm at Pukeuri, near Oamaru. His father, Lionel Orbell, was a farmer and his mother, Rachel Buckland, was an accomplished New Zealand watercolour artist.

In 1927 Geoffrey went to Dunedin to study medicine at the University of Otago. Here he met a young art student, Sheila Houston, when both signed up for dancing lessons. They were paired together by the instructor because they were both tall. As keen skiers, Geoffrey and Sheila were members of the Otago University ski team. The couple married in 1935. Sheila did not finish her studies, as she accompanied her husband to Melbourne, where he continued his medical training to become an ophthalmic surgeon. On their return to New Zealand, Geoffrey joined Invercargill doctor J.G. MacDonald at his ear, eye, nose and throat specialist practice.

"We had an idyllic childhood," Lynley remembers. "We did so many exciting things as kids. My earliest childhood memories are of trips on a gravel road to Te Anau when it was all manuka. We were on the lake all the time. As teenagers, Mairi and I used to swim across the lake to Brod Bay."

In the 1950s, Lynley Orbell was a New Zealand champion swimmer and the first woman to win the Southland sportsperson of the year award. She says her father was a keen supporter who accompanied her on the New Zealand swimming competition circuit. 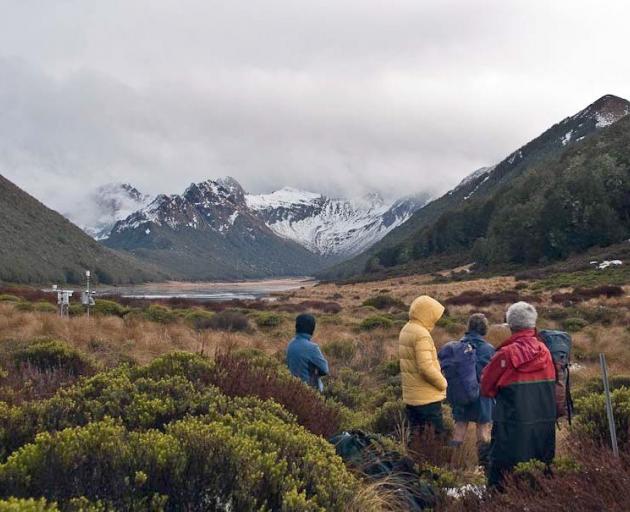 Members of the Fiordland Tramping and Outdoor Recreation Club at the Takahe Valley with Lake Orbell in the distance. Photo: Martin Silva
While living in Invercargill, Dr Orbell was a Rover Scout leader for 13 years at the Jellicoe Sea Scouts.

Another of Orbell's many passions was boatbuilding. Over the decades in his backyard he built 96 boats, from dinghies to a 44ft (14m) ketch South Wind, which he built with the help of the sea scouts. Among his projects was a series of vessels named Mariner, after the boat his great-grandfather came out on from England.

After the takahe rediscovery, the Murchison Mountains were declared a special area in 1949 and closed to the public. This did not include Orbell.

"When I found the takahe, I was awarded an illuminated certificate which allowed me and any three people I liked to take with me a freedom of the Murchisons," he wrote in his journal.

In addition, Orbell was made responsible for controlling the deer population in the Murchison Mountains. On his many hunting trips he would invite friends and family members to help with this enormous task. Te Anau resident Merv Halliday was a member of this elite group.

"On those trips to the Murchisons he was like a father to us and we always had a lot of fun," Halliday recalls. "I cherish those days. It was a privilege to be part of it. I still regard that quarter of a million acres as mine, because I'm the only one left of Doc Orbell's hunting group." 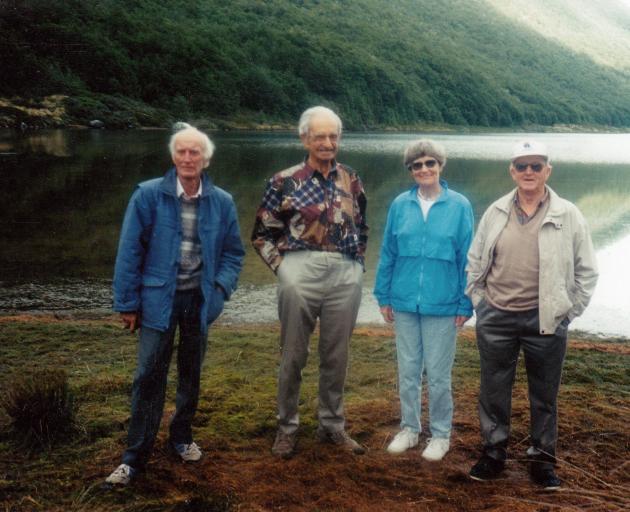 Geoffrey Orbell celebrates his 90th birthday and 50th anniversary of rediscovering the takahe with wife Sheila and the rediscovery team (Neil McCrostie, Rex Watson and JoanWatson, nee Telfer) at Lake Orbell in October 1998. Photo: Orbell family collection
The Orbell family had a holiday house next to the boat harbour, which, although modified, still stands today. Merv's family lived in Invercargill and he went to school with the Orbells' son, Michael. The Hallidays also had a bach in Te Anau and the two families spent a lot of time together. In the 1950s Geoff Orbell and Earnie Halliday (Merv's father) were the drivers behind turning what used to be a frog pond into the Te Anau boat harbour marina.

In the 1953 Coronation Honours, Orbell was appointed a Member of the Order of the British Empire for scientific work.

He retired from medicine at the age of 70 and moved to Blenheim, then to Cromwell and later Mosgiel, but continued an active life, committing himself to woodwork and carpentry.

Orbell celebrated his 90th birthday and the 50th anniversary of his takahe rediscovery by releasing captive-reared takahe into the Takahe Valley in the Murchison Mountains. He was accompanied by the three members of the rediscovery trip and his wife, Sheila.

As we sidle towards the valley floor following the shore of Lake Orbell, the loud call of a bird, repeated several times, echoes through the mountains. We stop and listen. Suddenly a large blue-green bird steps out of the tussock. I feel excited and humbled at the same time, not only to be in this special area, but also to be one of the very few with the privilege of seeing the takahe in the wild, thanks to the man who brought it back from the brink of extinction.