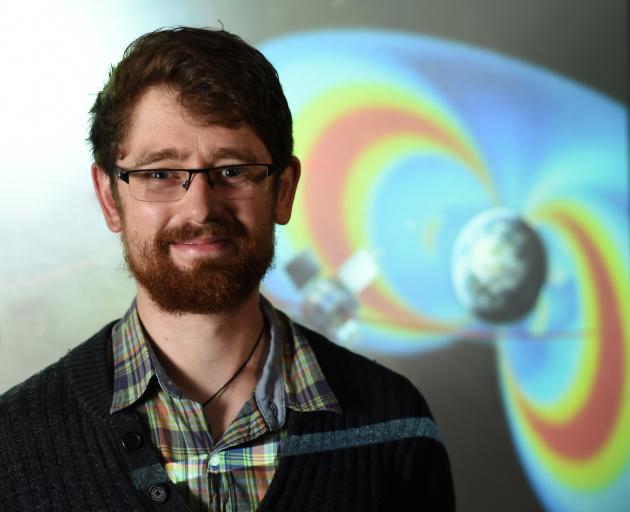 Aaron Hendry in front of an artist’s impression of Earth’s invisible radiation belts and one of two Van Allen probes, which were launched in 2012 to provide data about how the belts behave and react to changes in the sun, thereby contributing to Earth’s space weather. Hendry hopes to continue to study the belts on a post-doctoral research fellowship in Prague. Photo: Gregor Richardson.
Where the sky stops and space begins, researcher Aaron Hendry is hard at work, writes Kim Dungey.

With more countries reaching into space and more scientific instruments being put into orbit, it is an exciting time for space physics, Aaron Hendry says.

Any launch of a new satellite is an opportunity to potentially answer questions that scientists have had only "half answers" to for a long time, says the Dunedin man who is studying space physics at the University of Otago.

"One of the things to remember about space physics is it’s actually a very young field. We’ve only been going to space since halfway through the last century and it’s only very recently that we’ve put experiments up there that will give us large amounts of good quality data. As the years go on, we’ll learn more and more so it’s definitely a growing field."

Hendry’s particular interest is the Van Allen radiation belts, two doughnut-shaped rings of very high energy particles that are trapped by our planet’s magnetic field and are in orbit around the Earth.

The belts can swell or shrink as part of a much larger space weather system driven by energy and material that erupt off the sun’s surface.

Hendry’s work has looked at one of many processes that drive the population of particles in the belts: very low frequency radio waves that interact with the electrons and knock them out of orbit into the Earth’s atmosphere.

One reason for studying the phenomenon is to better understand these natural processes so we can understand our own effect on the climate, the former Otago Daily Times Class Act recipient from Otago Boys' High School says.

‘‘It’s not to say that this is driving climate change. But there’s been recent research which has shown that electrons falling into the atmosphere can cause changes in ozone chemistry and drive changes in temperature on the ground, mainly in the polar regions.’’Another reason is that excess radiation can damage satellites passing through the belts.

"My supervisor likes talking about a particular case where a satellite turned into a zombie: it was still running and broadcasting but they had no control over it and it was drifting around, causing havoc amongst all the other satellites. That was basically because of  a big burst of radiation which flipped a few bits in its code and caused it to go crazy.

"We need to understand the processes that are causing losses and growths in these energetic particles so we can better protect satellites, because these days we rely on them for so much; for internet, phone calls and GPS in particular."

While the boundary between Earth’s atmosphere and outer space is "tantalisingly close" at only about 100km above the Earth’s sea level, sending up satellites is complicated and costs hundreds of millions of dollars.

Experiments on Earth are a "useful proxy" where satellites cannot be used or scientists want confirmation of what a satellite is telling them, he says. Militaries around the world have "massive" radio transmitters that they use to communicate with submarines. The radio waves bounce off the the ionosphere and a network of receivers is constantly listening to them.

"They’re all encrypted so we’re not able to tell what they’re saying but we can detect changes in the property of the wave signal and use that to figure out what is happening at the top of the atmosphere."

The Otago Physics Group that Hendry is part of installed a receiver near Scott Base and in 2013 he went to the Antarctic to help with routine maintenance. Getting to experience the frozen continent, including a night spent in a tent out on the ice, was "amazing".

"It’s a really strange experience stepping off a plane and looking around when everything is just flat and white and you have no sense of scale or distance. The majority of the time I was there, it was around minus 20, not factoring in wind chill ... I’d love to go back."

He has also presented at international conferences around the world. An International Union of Radio Science award enabled him to attend a scientific symposium in Beijing while a Claude McCarthy Fellowship helped him work with a collaborator in the UK and attend a conference in Prague, the city he hopes to work in as a postdoctoral researcher when his PhD is completed soon.

Hendry, who has co-authored papers with people in the US, Canada, the UK and Japan, says presenting research to the wider community is rewarding.

"Particularly when you go to a conference or read a paper and someone is citing your work. It’s confirmation that yes, you’re doing ‘real’ science, that people care and people are actually paying attention to what you’re doing. It’s easy to get this idea in your mind that you care but maybe no-one else does ..."

The 27-year-old, who plays percussion for the St Kilda Brass Band and occasionally for the Dunedin Symphony Orchestra, says receiving a physics scholarship at the end of his time at Otago Boys High School was one of the main reasons he studied the subject at university.

"I’ve always loved astronomy and space so physics was the closest I could get to doing that at Otago."

In his early teens he got a telescope, which he set up in his parents’ Musselburgh home and used to study the stars over the city or, on a clear night, pick out Saturn and Jupiter.

However, it was difficult at school to know how or if he could make science a career.

Back then, he also wanted to be a video game programmer and in his third year at university he did a computer game design course.

"It was one of my favourite papers I’ve taken at university so maybe that’s a fall-back if everything falls apart," he says, laughing.