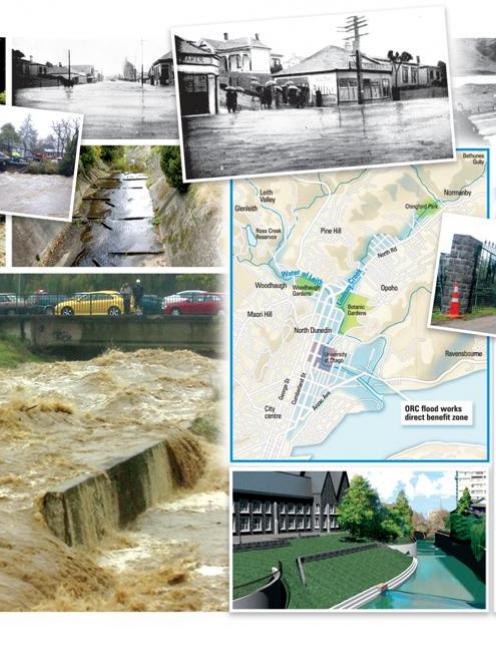 A map of the Water of Leith and Lindsay Creek surrounded (from top left) by images of the Leith by Rockside Rd, the Leith in flood by Montgomery Ave, North Rd flooded, a concrete section of Lindsay Creek, 1923 flooding of the Leith near Rockside Rd, the gates of Dunedin Botanic Garden on Gore Pl, 2006 drawings showing proposed flood scheme works on the Leith, the Leith in flood below Clyde St, kayakers on the Leith above the George St bridge.
Otago Regional Council chief executive Graeme Martin is clear about his council's priority for the Leith. It is: "Getting the flood through safely".

Everything else he describes as "enhancements and garnishings".

"Now, there are a whole lot of garnishings and enhancements that are not compatible with a high velocity concrete channel."

Mr Martin was responding to ideas about the Leith put up by Dunedin architect Tim Heath.

Mr Heath contributed to a University of Otago document last year called the "campus master plan" setting out ideas on how the university might develop over the next 20 years or so.

According to one council engineer, the university's master plan "potentially made redundant" much of the detailed design work done on the stretch of the Leith that flows through the campus.

When approached by the Otago Daily Times this week, Mr Heath accepted the master plan might have presented the council with some problems.

"One of the reasons that the campus master plan was useful, I think, and probably a pain in the bum to the [regional council], is that we are not engineers.

"We didn't do any calculations at all on the Leith but we were aware of the wider history of the Leith."

Mr Heath referred to the time when the Leith was an unmodified mountain stream flowing into the swamp where much of North Dunedin now stands; when moa were present on land now occupied by the campus; when the Leith supported Maori villages and later a flax industry.

He considered there was more to be taken into account than just flood protection.

"It is a river. It's not just a convenient drain."

The master plan described the Leith as a "major landscape element" and suggested a "landscape-led, integrated, multi-professional approach to deliver wider amenity values".

"The intention is that the river be transformed from an engineered drainage channel into an area of new waterside landscape," it said.

The master plan ideas included:
• an active and accessible river frontage from the Botanic Garden to Otago Harbour.
• the northern riverbank being planted with native species.
• the sunny southern bank remaining "more open" with lawns and terraces.
• significant new buildings replacing most existing buildings, with those closest to the river of three storeys.

Mr Heath said the Leith was a "natural corridor" and he could envisage planting native species along its banks through the campus to provide habitat for fish, insects and birds.

The exception would be the retention of lawns in front of the clock tower building.

"But otherwise, where it's currently a channel, we would go to town and we would try and provide habitat for those different species."

Mr Heath said the proposed flood scheme did nothing to address such issues as increasing the bird life through the university.

"The current engineering proposals don't even ask the question."

He described the existing concrete channel as "a big pipe" which "just transfers the [flooding] problem from one place to the next".

And he described many decisions made about the Leith as "ad hoc".

"The problem as I see it with the Leith to date is it's always been treated in a sort of a knee-jerk way."

The grim concrete walls of the "velocity channel" that runs through the university campus are part of Dunedin's heritage - handed down by the engineers of the '40s and '50s.

The modern plan to upgrade the scheme seems to have hatched in 1979 and has been developed, modified, consented and developed to the point where construction work has begun on the section upstream of the university.

In 2007, the council and the university signed an agreement over how the stretch of the Leith through the campus would be dealt with and Mr Martin confirmed this week both organisations were still in agreement about what should be done.

He acknowledged a "natural aspiration" on both sides to enhance the Leith.

"But you've got to have space to do it."

"Otago in particular has systematically, during Pakeha occupation, turned its backs to the waterways and closed them in.

"As recently as 25 years ago, everything in this city was geared - and that's from the catchment board, city council, the harbour board, the community - was geared to how do we make this Los Angeles-style, concrete channel ... shoot the water out to the sea?"

Suggest to Mr Martin that perhaps modern engineers continue to think like those 25 years ago and he becomes more animated.

"Absolutely couldn't be further from the truth.

"Tim [Heath] needs to read what the council's proposing.

"If you want your tui patch, get rid of the bloody houses and the university. It's that bloody simple.

"This is frustrating. There has to be a real-world ability to get from that path back towards this path in a safe way.

"The issue is, how much of this can we achieve in the process of [providing] flood protection.

Mr Heath considered cities on the Avon, Hutt and Waikato Rivers had "got beyond" thinking of only the flood issues.

"Right through New Zealand, people have sort of suddenly woken up and said these are the things that have been sitting right under our nose.

"Why the hell are we making industrial drains out of them?

"And that has been what has happened with the Leith."

He pointed to University of Otago botany graduate Di Lucas as probably the first to raise concerns over the landscape aspects of the Leith.

Now a landscape architect in Christchurch, Ms Lucas said she produced a report for the university that "kicked up a fuss" in 1979.

"I was appalled that it was just being an engineered water disposal scheme. It wasn't treated as a natural system and as an asset.

"I wanted to look at the opportunity to manage that waterway - managing the catchment not just the channel - so it could be a contributor to the environment."

Her report concluded engineers were "concerned only with disposing of water as quickly as possible".

"An efficient stormwater drain is the result. The potential of waterways as valuable public resources has been ignored."

And she recommended replacing the concrete channel with "smaller, more natural channels" and developing a grassed flood plain to slow river flows and increase storage.

"It is important that the catchment be designed as a total system with a landscape design philosophy for restoration of a natural waterway."

Her views then got backing from various quarters including the ODT which, in an editorial, applauded Ms Lucas for "challenging the present state of the Leith".

"The Leith has been turned into a large concrete drain. It has become increasingly inaccessible. The city has turned its back on it," the newspaper opined.

"Is this the only alternative to grassy banks and destructive floods? Surely not! There must be people amongst us who can devise a happier compromise."

Speaking to the ODT this week, Ms Lucas noted how Christchurch had improved the landscape of the Avon which once also had "a lot of concrete".

"We've removed a lot of concrete in Christchurch.

"Christchurch is good at trying to manage the whole catchment in a naturalistic way.

"They've removed what were treated as drains. They've tried to open those out and naturalise them.

"[Christchurch] is a world leader in waterway management."

Ms Lucas said management of Christchurch's waterways was delegated by the regional council to the city council, which had found the naturalised system cheaper to maintain than concrete drains and pipes.

"They've changed the whole thing and the wildlife that's come back is amazing."

"What was treated as a drain is now an asset right through. Fantastic.

"Sure it's a different hydrology [to the Leith] but I'm sure there are some lessons from here."

"So we can't make those sorts of comparisons.

"But certainly we are not focusing on a scheme that's just building concrete channels that are higher. There are aesthetic aspects in it also."

A comment by University of Otago vice-chancellor Sir David Skegg [Otago Daily Times opinion page, January 31] that the university "would not be a major beneficiary" of the Leith Lindsay flood protection scheme runs counter to a 2008 assessment prepared for the Otago Regional Council.

Sir David made the comment in an article arguing that the university was not to blame for delays and cost overruns affecting the Leith Lindsay scheme - an impression he said had been created in earlier newspaper coverage.

A "market economics" economic assessment was part of a report in front of the council at its meeting this week and set out the direct and indirect benefits of the scheme to government-owned properties.

Because it is owned by the Government, the university pays no rates and would therefore not be obliged to contribute to the scheme.

However, because the regional council considers the scheme provides major benefits to the university and other government properties, it is pushing for a substantial government contribution to the $53 million-plus cost of the scheme.

The assessment also stated: "The dominance of the education sector, especially the university, in the direct benefit zone and the wider Dunedin economy, is a key consideration evaluating the costs of flooding, and the crown-owned university is a major beneficiary of the existing and proposed flood protection works."

It concluded it would be "inequitable" for the Crown not to contribute.

The report containing the assessment, from corporate services director Wayne Scott, noted without "some form of Crown contribution" ratepayers in the "direct benefit zone" would pay for flood protection for crown-owned properties, along with their own properties.

Sir David was overseas this week and unavailable to comment.

Regional council chief executive Graeme Martin said he had talked to Sir David since the comments appeared in the paper and he had "refreshed his mind as to what the consequences are to the university ...".

"It is not appropriate to be suggesting the university and the Otago Regional Council have any gulfs between them," he said.

State of play
• The Otago Regional Council this week decided to put two proposals on the Leith Lindsay flood protection scheme out for public consultation (one of which involves dropping work on Lindsay Creek), effectively delaying a decision until at least June.
•The two proposals, both to be staged over 20 years, cost respectively $53.1 million and $35.9 million.