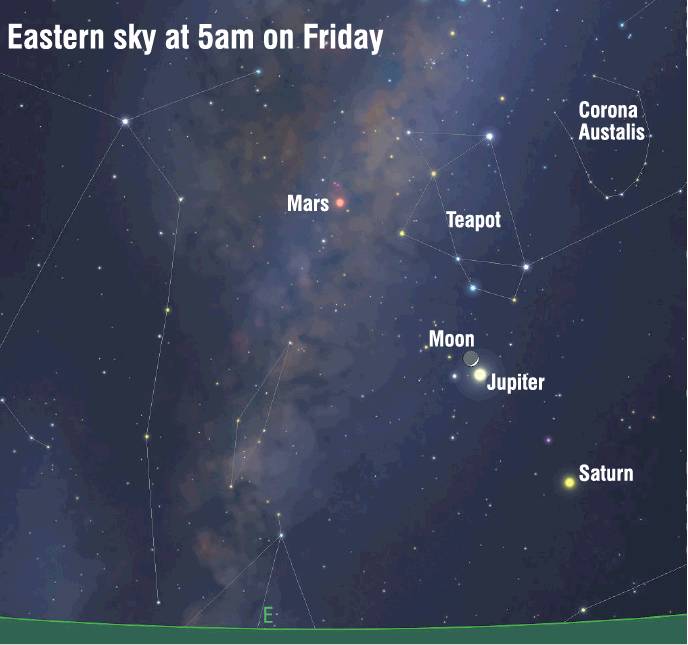 Otago stargazers are in for a celestial treat on Friday morning, so it’s well worth getting up early, writes Ian Griffin.

The waning crescent moon will be very close to Jupiter, making for a beautiful sight before dawn. Just under 15% of the moon's visible surface will be directly illuminated by the sun.

The remaining part of the lunar disc will be lit by earthshine; the name astronomers give to sunlight which has reflected off both Earth and moon before reaching your eyes.

With the moon and Jupiter being relatively low in the sky, photographers across our region should be able to capture some lovely pictures.

The moon and Jupiter are in the constellation of Sagittarius. At the time our chart is drawn, our closest celestial neighbour is just over 390,000km from us. Jupiter is considerably more distant; it is more than 800 million km from Earth.

While this conjunction can be enjoyed with the naked eye, a pair of binoculars, or, better still, a telescope will definitely enhance the experience. For example, if you scan the moon's northwestern quarter, the bright crater Aristarchus will be close to the line between lunar day and night (astronomers call this line the terminator). 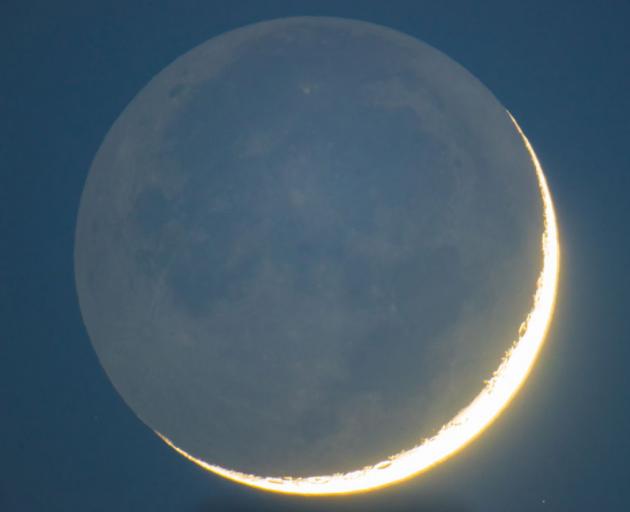 The Moon lit by earthshine. Photo: Getty Images
Aristarchus is the most brilliant of the moon's craters. It is approximately 40km in diameter and, like all of the lunar craters, was formed when a large body impacted the moon, millions of years ago.

If you turn your telescope towards Jupiter, all four major moons will be easy to see, with two on each side of the planet. If you look carefully, you should also be able to pick out Jupiter's great red spot. This enormous 400-year-old anticyclonic storm transits the centre of the planet's disc at 5.26am.

Jupiter and the moon aren't the only solar-system objects on view in Sagittarius. As the chart shows, both Mars and Saturn are also moving through the constellation at the moment. The red planet can be found to the left of the teapot, while yellow-coloured Saturn is lower in the sky.